The Sports Gazette spoke to Shelina Zadorsky, current Canada and Tottenham Hotspur Women player to discuss; Canada’s goals at the Tokyo Olympics football tournament, the experience of playing with Spurs, beating England Women in March and much more.

Football has the FIFA World Cup, but after the 2016 experience what would say is special about the idea of being an Olympian?

I think what makes it so special is you are competing on a stage where you are with the elite athletes and players of all different sports. And I think it’s so cool to come together as Canadians where you root for each other with so much passion, you watch all the other events and just want Canadians to do well. So I think it’s so special to be part of that and represent such a great country.

And then, of course, the competition as footballers in the Olympics. It’s small groups and a tight schedule and I think it’s cool to be part of that Canadian family

What is Confidence in the Canada team at this stage of equaling the 2016 bronze medal or going one better?

“Change the colour of the medal” that’s our goal, we just want to go in and take it each game as it comes. We know it won’t be easy and it won’t be handed to us, but that is our goal to get back on the podium and go one better.

We had some solid performances in the camp. We understand we need to score more goals. But to keep clean sheets against quality opposition that generally score, that was positive and something we can take with us.

Reflecting on the game vs Brazil you almost scored with a header which would have been your second goal vs Brazil. Was playing opponents like Brazil & Czech Republic the perfect preparation going into the Olympics?

They absolutely were and what I think was so exciting was that we treated them as Olympic Game matches  as we and Brazil that are in the Olympics and are getting ready to be on that stage, so yea it was the perfect time to play the Brazilians. They are so technical, strong, fast and physical so it was a great Olympic level test for us. We didn’t win – but getting the clean sheet & getting the chances we did was a confidence builder and we took a lot of confidence from it. 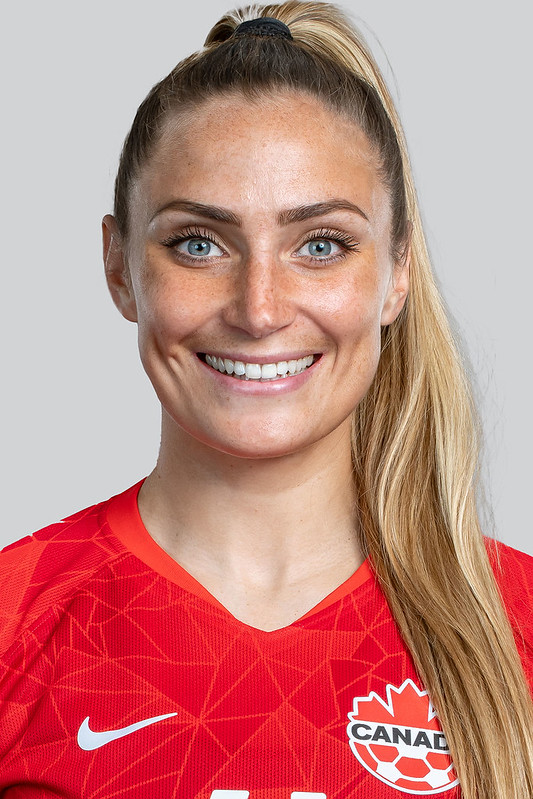 After playing & beating England in March – how good preparation for playing team Great Britain at the Olympics do you think?

That win was close to home after playing my first year at Spurs so I was very happy.

Realistically the Great Britain team will have many of the English players we played and they will add a few more quality players, but at the same time, these are players I play with week in week out in the WSL so I’m very familiar with them. They are very talented and the game will be another challenge, we will have to be switched on at all times because they are great at set-pieces, crossing and finishing – so it will be a great defensive test.

But in the previous game, I think we showed our attacking flair by getting in between England’s lines and finishing in front of their goal. I’m excited about the Great Britain game, every game in the Olympics is do or die, but very much looking forward to that one.

How would you compare NWSL vs FA premier league, plus a foreign player how excited were you by the new Sky Sports broadcast deal announcement for the English women’s league?

Both leagues have such amazing players, so it’s always a test as a defender because you are always playing against some of the world’s best strikers, which is what I love.

I would say the American League is a bit more transitional in that there are a lot of fast players and very physical. In England, a lot of teams try to play out from the back, focus on tactics and try to move the ball.

The speed of the game changes in England, while in the USA I felt it was “go go go” constantly.

You are the second Canadian man or woman to play for Spurs alongside hall of fame defender Paul Stateri. In that context, personally how proud are you to be Spurs women captain?

I came here at such a good time in my career with a lot of experience and built my confidence as a player & person on & off the pitch. So I think I was in a space where I could come to England and be myself and impact the team the best I could. I bring that bubbly energy – I’m always speaking and communicating, while on & off the field I’m always trying to connect with players and staff. I think I was able to show that when I got here and Tottenham Hotspur was very welcoming and made me feel like I could be myself in this environment & I’m honoured to lead this Spurs side.

You have shared the dressing room at Spurs and Canada with two modern greats in Alex Morgan & Christine Sinclair.

I feel lucky to have been close to Sinclair and Morgan. It’s all the stuff they do away from the camera & you pick up on their habits as a professional.

Away from the camera, Alex Morgan does all the things to be the perfect professional. Sinclair similarly with her great professionalism and humility despite being the greatest International goal scorer male or female.

The Canadian women have carried the football on the nation’s back for a long time. But the recent victories by the men over Haiti to qualify the team for the final round of CONCACAF FIFA 2022 world cup qualifying for the first since 1997, has renewed excitement around that team. What would be your message to Canada fans in light of these developments?

This is very fantastic. Being coached by John Herdman and knowing his philosophy and the impact he can have on human beings, not just football players, I had an incredible experience being coached by him.

He has moved to the men’s side and had an impact so I couldn’t be happier for him and the men’s team. It’s just great to see Canadian football being respected, we want that for both men and women and it’s great for the younger generation to see both men and women doing well and being role models.