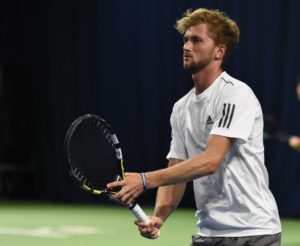 Loneliness, frustration and financial trouble – words that could be used to describe the situation for hundreds of professional tennis players in the world.

One of those players is Tom Hands (ranked 1,378 at time of publication). Since turning professional in 2019, following a successful four-year stint at Drake University in America, Hands has already faced great challenges.

These have come in the form of first round defeats and the coronavirus pandemic, which has disrupted his schedule.

The 24-year-old, however, has had moments of success under the stewardship of his coach Hamid Hejazi, giving Hands confidence and optimism going into 2021.

During the summer, he won a number of matches against players ranked above him at the UK Pro Tennis Series Event, a series of tournaments put on by the Lawn Tennis Association (LTA) throughout July and August to give British players the opportunity to compete after the coronavirus pandemic halted the tour.

It was an experience Hands really loved, saying: “It was nice to get all these great players together and play loads of matches. On top of that, the money was great, and for players like me, around my ranking, it is so important.

“In terms of the calibre of the opponent, it was phenomenal. All the players I was playing were technically better than me, which is the perfect training environment, and, despite this, I got quite a good few wins from players between 600 and my ranking in the world.”

However, despite these victories, Hands has had to battle the feelings of isolation and frustration that come with being a tennis player at the lower level of the tour, where players typically travel alone.

Time at home is scarce and prize money is low, with a first round loss at an International Tennis Federation (ITF) Future Tours events earning you a meagre $156.

Hands acknowledges these issues can be difficult: “It’s a lonely sport and tough at times. It comes in swings. You don’t earn much money on the tour because you are spending it on travelling and accommodation. It can be demoralising at times.”

Hands has put in safeguards to help solve the solution of isolation: “If I am travelling out there, I am looking at which other Brits are out there with me.

“It is important to try to help the guys around you, especially from your country to improve, and with that they will hopefully return the favour and give you advice. I also spoke to Hamid [who was in the UK] daily about what I was doing.”

For Hands, this community aspect of the events is something he believes the LTA could do more on: “There could be a real push from the LTA to encourage players to travel in groups.

“That won’t only help players improve but will help that loneliness problem.”

At the start of November, Hands lost in the second round of qualifying in a Futures event in Greece to Zizou Bergs, a player who beat world number 46 Albert Ramos-Vinolas the week before. This illustrates the depth of the men’s game and shows how hard it is to get to the top.

Hands is not demoralised by this challenge, although he was naturally disappointed with the defeat. He continues to have faith in his game, taking stock of the unique set of circumstances he and other players are competing in.

“The last few tournaments have had players of a high ranking, who usually wouldn’t play in them. However, they are, due to the coronavirus meaning there are so few tournaments on.

“Usually, if I’m playing these guys, it’s in the semi-final of a main draw, not in qualifying. I won one and lost two, but beat a guy ranked 820. It’s easy to slip into a negative mindset but, I must remember I’ve beaten a guy ranked 500 places higher than me.

“You still see players in the top 100, such as Aljaz Bedene who don’t have 140mph serves, but they are 50 in the world and doing really well.”

Looking forward to January and the new season, Hands hopes to gain an ATP point abroad on a surface such as clay, where he is out of his comfort zone, as he aims to break the top 1,000 barrier.

He will then push onto his ultimate goal of getting into the world’s top 400 – a target which he and Hejazi believe is achievable.

Who said the magic of the FA Cup is dead? @Tiger93Creedon describes the stories of the Third Round from @chorleyfc players blurting out Adele's 'Someone Like You' to @crawleytown Nick Tsaroulla's emotional interview after victory over Leeds United #FACup https://sportsgazette.co.uk/something-like-the-fa-cup/