Posted on 12 October 2019 by Benjamin Chapal

The Carolina Panthers are set to play their first London game in franchise history. They will face NFC South rivals Tampa Bay Buccaneers at the newly constructed Tottenham Hotspur stadium on Sunday afternoon. The Panthers arrived in London on Thursday morning, and have been performing their final tune up practice sessions at Harrow School. Harrow is a boarding school famous for producing a number of British prime Ministers, including Winston Churchill. Head coach Ron Rivera described the setting saying, “You would think you were in a Harry Potter movie.” The setting may be spellbinding, but the Panthers will need more than magic to defeat the Buccaneers, who got the better of them earlier this season. The Sports Gazette was on site to keep up to date with all of the news in the buildup to the game.

Carolina’s offense so far this year can be summed up in two words. Christian. McCaffrey. The prolific running back has been producing offensive yardage at an absolutely heinous rate so far this year. He has 587 yards rushing with 6 rush touchdowns and 279 receiving yards with 1 receiving touchdown. He is on pace to break the NFL record for total yards from scrimmage, and is ranked first (amongst running backs) in the NFL in a number of stat categories including yards, touches, catches and percentage of snaps played. Unfortunately for the Panthers, the only week that McCaffrey hasn’t earned at least 100 yards of offense was in their week two loss to… you guessed it, the Buccaneers. The Bucs have a beefy run defense, and the Panthers will need to vary their offense to expose them in London. That will include a need for steady hands from the team’s top wide receivers, DJ Moore and Curtis Samuel. Quarterback Kyle Allen opened up about his on field partnership with his wide receivers.

“I think every week it just gets better and better. I had a lot of reps with them in OTA’s (off season training sessions), and we’ve always had a good repour, but things just keep getting better.”

“We are going to focus on a balanced attack as usual, I think Tampa Bay’s run defense is exceptional… its going to be a good challenge but I think we are going to have to balance everything.”

That balance might just be a necessity for McCaffrey, who has been carrying the majority of the offensive workload through the first five games. The running back has been injury free for his entire career, but picked up a back problem last week, landing hard on his lower back after an acrobatic touchdown. He has been cleared to play Sunday and was a full go at the teams open practice at Harrow on Friday.

The Spanish call of Christian McCaffrey's front-flip TD was nothing short but amazing.

Rivera was confident in McCaffrey’s return to the field on Sunday.

“Christian’s fine. If we had practiced yesterday, he would have participated. He’s expected to participate today. He’s gotten his treatments and stuff like he’s supposed to. He just seems ready to roll. We’re pretty excited about getting everybody on the football field today.”

There is no denying the extent of McCaffrey’s powers, but a slight downtick in his workload this week would do him a world of good. It will be a real test in the abilities of DJ Moore, Curtis Samuel and Greg Olsen to keep the chains moving in London.

The pass rush is one aspect of the Panthers game that has improved since the week two defeat to Tampa Bay. They only were able to tally two sacks in that game, but have since become the number two pass rush in the league. Defensive ends Mario Addison and Brian Burns are a big reason for their success, who have tallied 6.5 and 3.5 sacks respectively. Rivera mentioned the growth that this pass rush has experienced since week two.

“There’s a huge difference. I’ve talked about this before, but you now have a group of guys that have played together. They have a feel for one another. “

“Yesterday coming off the practice field, I was watching Brian and Dontari (Poe) talk. Those are things when you see these guys communicating what they are doing and working on, then you feel that you’re growing and getting better and having success. I think that’s really cool because now going into our sixth game, they’re facing a different group of guys up front so I’m kind of excited about that.”

Linebacker and former defensive player of the year Luke Kuechly had this to say about the defensive turnaround, “We were doing a lot of things well, but we weren’t being consistent. I think guys have done a better job of being consistent the past few weeks, and we’ve been able to consistently pressure the quarterback.” 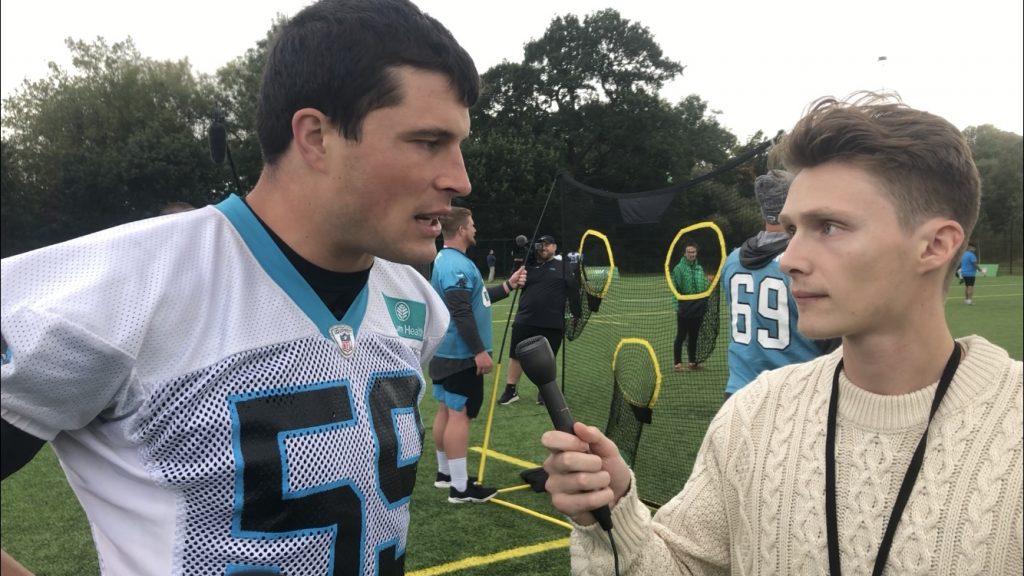 This will be crucial against a Tampa Bay offense that can do real damage in the air. Quarterback Jameis Winston has an arm that can cause the Panthers real problems if he isn’t made uncomfortable. He also has a telepathic relationship with wide receivers Chris Godwin and Mike Evans. The wide receiver pair are possibly the most prolific in the league, combining for 10 touchdowns and 879 receiving yards. Kuechly acknowledged the threat of the Tampa Bay’s pass game, but remained confident in the Panthers defense.

“Jameis can go out there and throw for five touchdowns if you let him, but if we are doing our jobs, applying consistent pressure, and keep the ball in front of us, then we will be in good shape.”