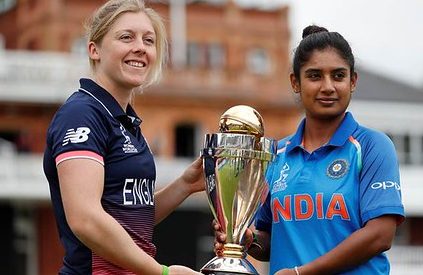 When news broke that the women’s Test between England and India would be played on an old pitch, advocates for and fans of women’s cricket, especially Indian women’s cricket, were rightly angry.

When there are so few women’s Tests – 2021 will be the first year with more than one game and the first with a non-Ashes Test since 2014 – the burden on each one to entertain is unfairly high. Test cricket’s hard enough when you’re just playing for your team, let alone your entire sex.

Well the women are playing their 1st home Test in 2 yrs on a used wicket, ‘cos there was a men’s T20 Blast match on it last wk.

“Obviously not ideal,” says Heather Knight, ever the diplomat. Tried to change it. Request denied.

… a Test, it’s like they are playing for the whole future viability of the format. The pressure is on them to make it entertaining as well as to win, in a format they almost never play, often on crappy pitches. And pitches are the one factor that can be controlled.

Anyone who was at Taunton in 2019 or Canterbury in 2015 will tell you the type of cricket that dead pitches make for. The Bristol pitch may only have been used for a (men’s) T20 a week before the Test, and it (mostly) turned out fine, but the idea of any men’s Test pitch anywhere not being top priority is inconceivable.

But the idea of Indian women’s cricket having to settle for second best is all too familiar.

Shut Up And Play

Why are we talking India when this pitch debacle is largely the ECB’s doing? Because, even though it failed, England captain’s Heather Knight’s request for a fresh pitch shows a level of empowerment that simply does not exist in Indian women’s cricket.

Cricbuzz’s Bharat Sundaresan draws on a Sicilian analogy: “It’s endemic of the relationship between players, male and female, and the BCCI. They live by this omertà code wherein you’ll rarely see a current or for that matter a former cricketer say anything even semi-critical about the functioning of the board.”

Ananya Upendran, managing editor of Women’s CricZone, goes further: “If you want to survive in the system, you must either make yourself invisible or dance to the tunes of those in power. After all, we must be ‘grateful’ that there is a women’s team at all.”

Thus, we arrive at a situation where the team only gets paid their prize money when the board feel pressure from an English broadsheet newspaper.

Whether it’s opener Smriti Mandhana on equal pay or fast bowler Julhan Goswami on the Women’s not-an-IPL clashing with the Women’s Big Bash, India’s leading players defend their board rather than advocating for change.

The contrast with Heather Knight barely disguising her frustration at being denied a fresh pitch is stark enough. The contrast with Australia’s entire playing staff almost going on strike to ensure a new pay deal included women’s international and domestic cricketers is a yawning chasm.

Raf Nicholson, women’s cricket historian and editor of CricketHer, explains: “They are worried about getting fired [and are] reliant on their BCCI-issued central contracts to survive, and there is no Players’ Association in India.”

I wrote last March in the wake of 86,000 packing the Melbourne Cricket Ground for a women’s World Cup final about the acute need for India to have a players’ union if it hopes ever do more than rely on sheer numbers.

Playing With The Institutional Handbrake On

Upendran, Sundaresan and Nicholson all point out that the BCCI board is not just all male, but has nobody on it with a proven track record of interest or expertise in the women’s game.

Nicholson says: “The BCCI’s belief is very much that in order for India to prove themselves worth of more investment, they need to win World Cups.

“Of course, this is a totally spurious circular argument because it is very difficult to win tournaments if you don’t have proper investment.”

Sundaresan concurs: “There is clearly no long-term planning for where they want this team to be headed in the next few years. What the Indian women have done already by reaching two of the last three ICC tournament finals is itself a remarkable achievement.”

Upendran, who played domestic cricket for a decade, says: “Shafali Verma, Jemimah Rodrigues, Mandhana: we found those players by accident.

”So, if we are able to find so many potential world beaters without lifting a finger, I’m sure there is an expectation at board level that that will keep happening. It means less work for everyone.”

The BCCI seem content that in a country of 1.4 billion people, enough good women’s cricketers will simply turn up. Many in domestic cricket report that the numbers are used to keep players in line, and that this threat is so effective nobody has to bother making it explicitly.

Remember, this is a country where commentators are contracted to the cricket board and which renames stadiums after sitting Prime Ministers on the morning of a Test match.

The BCCI’s willingness to use their power is well-documented. To pick the greatest hits, they tried to stop the first men’s T20 World Cup before it happened, and along with England and Australia seized control of the ICC itself for several years. It is thus instructive to see when they choose to do nothing.

And that’s exactly what they did regarding the used Bristol pitch. No phone calls, no leveraging of Indian stars in the Hundred, no reminder of India’s mass TV audience. No, once again, the women were thrown into unhelpful circumstances and told to get on with it.

“If India puts a solid system in place, the sky really is the limit,” concludes Upendran. But as long as there isn’t, any success in Indian women’s cricket will continue to be in spite of the system, not because of it.