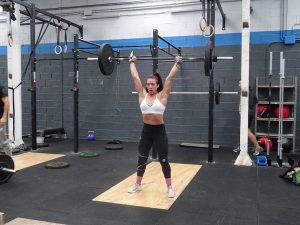 CrossFit is the sport to do.

Valentina Rangel is 22, she is ranked first in Columbia, where she is from and 156th in the world. Despite only starting CrossFit four years ago. “CrossFit looks for athletes capable of all kinds of tests,” and this is what Rangel has been fighting for.

This sport dates back to the 1970s and is composed of a series of exercises that help athletes gain strength and muscle for everyday life. Every training session is different and routines must be done at the highest possible intensity. “Box” is what they call the gym and WOD stands for Work of the Day.

Her dream is to attend the CrossFit Games, something similar to the sport’s Olympics – and she is there.

After four years of hard work, Valentina has been called for the 2020 CrossFit Games

The qualifiers are done via a video platform, called the Open. Participants send in their WODs in order to get a place in the Games, which this year will be in Wisconsin in August. In the actual event, athletes can perform in four or five tests a day.

“It’s quite a hard competition, but I’m working to do my best and prove what I can do.” says Rangel.

Athletes are awarded points according to the position they finish in the competition: “If you win a test, you get one point, and if you finish 40th out of 40, you get 40 points. You aim to get as few points as possible.”

Rangel played rugby at school, but was bored with the long training hours with no reward.

“I was familiar with weight-lifting because we needed to do it for rugby – I tried it and liked it.” And after two years in the sport, she became the third qualified in Spain which, as she admits, was a huge encouragement.

“I went to a Box to try and I liked the variety of exercises, I liked the challenge.” Nobody can deny the hard work: Rangel trains between 20 and 24 hours a week, including weekends. Discipline is the key for this curious sport, in which the best female athletes are the Icelandic ‘Dottir’.

Rangel is based in Bilbao and is also a CrossFit coach in two gyms, which leaves her with little time to relax. “My life is organised around this sport” she admits. Her studies are also sport-focused; she is in her last year of Nutrition and Dietetics and wants to start an MA in Sport Nutrition.

But, she doesn’t regret anything from the last four years, as she promised herself she would live a healthy life and go to the CrossFit Games.

“When I’m feeling down, I think about everything I’ve done and I feel it’s impossible for me to quit.” After various family problems, she gained weight and then made her promise to herself. She also decided she would help others with their own health.

Rangel also confesses that her physical aspect is different from other girls, but, as she says, “I know why I look this way and I know it’s what I need to perform well in my sport.”

Be on the lookout for Valentina Rangel at the CrossFit Games in Wisconsin from 27 July till 2 August.  The Sports Gazette team wishes her all the best.