Posted on 23 December 2020 by Mudhsuden Panesar 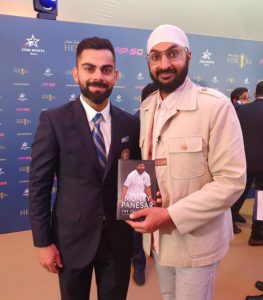 India captain Kohli has return homed after the first Test against Australia in Adelaide. While India’s dramatic defeat in that Test has caused some to call on him to stay on, others, including Australia’s star batter Steven Smith, believe it is vital that Kohli shows it is possible to strike a balance between playing and attending the birth of your first child.

This decision is a reflection of the changes that are happening within Indian society. For generations in India marriage hasn’t been an equal partnership, but their greatest modern-day sportsperson is showing that parenting responsibilities need to be shared.

“It is a beautiful feeling. It is difficult to describe how you feel, but when we found out we were having a baby, we were over the moon. When we announced it, the kind of love that was showered on us… it was amazing.

“People were genuinely so emotional and happy for us. We are looking forward to the third member joining the clan,” Kohli told the Youtube channel of his Indian Premier League (IPL) franchise Royal Challengers Bangalore.

Paternity leave amongst international cricketers has become a common thing, as governing bodies are becoming adaptable and flexible with players. However, the magnitude of a player of Kohli’s calibre missing the final three Tests of a four-match series has caused huge concern for Australian media channels, particularly Channel Seven, who only have broadcast rights for the red-ball games.

Understandably, they anticipate a substantial drop in viewership without Kohli. Will Swanton of The Australian even semi-seriously suggested that the Seven Network should sue.

Channel Seven feel there will be a drop in viewership, in light of the Big Bash not attracting huge names, and Kohli only being available for the first Test. They only have the deal for Test matches while their competitors Fox Sports have all the white ball games. It nearly led to Channel Seven withdrawing from Cricket Australia.

Kohli, the first test captain to win in Australia, will miss the iconic Boxing Day Test. For the Australian players that’s no bad thing – after all, Kohli has won 33 of his 55 matches as captain, and averages 62 as captain in Australia. However, his absence is massive for the authorities and the broadcasters.

Cricket Australia recently announced a ground-breaking policy for parental leave, where men’s and women’s players alike will be able to get 12 months’ paid leave for pregnant women and a guaranteed contract extension for the following year.

While the primary beneficiaries have been female cricketers taking maternity leave, there has also been a cultural shift over the years in the men’s game, when previously it may have been frowned upon for a cricketer to take time out to attend the birth of their child.

Former cricketer Alison Mitchell, who is now a pundit on BBC Sport, said: “I’m highly supportive. Cricketers are much more able now to leave a tour and come back because of central contracts. They take some time away and then return to the squad without losing any income.

“Of course the risk is always there, depending on who you are, that you cannot be guaranteed a place in the team on your return. The thing to hope for is for cricketers male or female not to be disadvantaged when they choose cricket as a career.

“It does need to move in line with modern professional working practices and parental leave is an important part of it.”

It is becoming the norm for male cricketers to be given blessing to leave international squads to attend the birth of their children. As well as Kohli, Kane Williamson of New Zealand and Rory Burns of England have also taken advantage of the more relaxed policies just in the last month.

There was a heart-warming moment during the Ashes last year when Joe Denly travelled through the night to be with his wife while she gave birth, and then drove back to play the next day.

However, the situation in India has traditionally been very different.

“This was a unique case. He was the first Indian cricketer to be granted paternity leave. The likes of MS Dhoni and Rohit Sharma didn’t ask for it,” said Indian selector Sarandeep Singh.

Kohli could well be a trailblazer when the issue comes up again, even though the Indian media has remained unusually quiet on the issue.

“It’s a welcome sign, but for cricketing fans it will take time to understand as they think if he is not going to play, then we may not do well as a team,” said chair of selectors Sunil Joshi.

A classic case was the T20 series where India beat Australia 2-1 when the two best T20 specialists Rohit Sharma and Jasprit Bumrah did not feature in the Indian team, but we still won!”

India won their last test series in Australia, with Kohli at the helm as he led the first sub-continent team to win in Australia. Without him, from 1-0 down, and without first choice fast bowlers Ishant Sharma and Mohammed Shami, that may be a tall order.

However, regardless of  the result for India down under, the macho idea of playing for your country over attending the birth of your child may well be softening because of a superstar’s decision to be with his wife; aptly demonstrating that marriage and parenting is an equal partnership.