Most people would crumble under the pressure and sense of anticipation. Thousands are watching you at the cricket ground or on the golf course, millions more are watching live on television. Imagine being sat in the dressing room at the cricket ground having watched hours of play. At first, you’re relatively relaxed, but then wickets then start to fall. Finally, your name is called to make that long, lonely walk to the crease…

The thought of slicing your tee shot into the rough or edging the first ball to the wicket keeper might even occupy the thoughts of those at the top end of the golfing or cricketing pyramids. So what are the parallels between these two sports at the very top level?

Monty Panesar, the former England cricketer, knows what it’s like to walk out to bat to save an Ashes match, but how would he perform stepping up to the first tee at The Masters ? Would he execute a perfectly honed swing and see the ball disappear at Bryson DeChambeau pace down the fairway, or would it be an ugly shank into the rabbit house?

Panesar currently ranks 21st in English cricket’s all-time list of Test match wicket takers, and, in the spin bowling department, he is the fifth leading twirler for the Three Lions. His pedigree with the ball is undeniable. Just ask Sachin Tendulkar, who Monty bamboozled back in Nagpur in 2006.

However, his batting left a lot to be desired… save for one glorious day at Cardiff 11 years ago…

In the first Ashes Test against the Aussies in 2009, England were on course for a resounding defeat. Four Australians had made centuries, culminating in a massive score of 674-6. On the fifth and last day the Aussies were cruising to victory.

Paul Collingwood, who was Panesar’s ‘batting buddy’ had just made a defiant 74, but was caught behind and the odds were now firmly stacked in the Australians’ favour. There were still 11 overs remaining; ample time for the last wicket to fall.

No-one gave Monty a prayer. However, he’d been working hard on his batting, and believed that, sooner or later, he would show the world how much he’d improved with the willow in hand.

“Practice in the nets was always so much better than my performances at the wicket,” he said. Unfortunately, I just couldn’t translate that form with me to the batting crease.”

Until the Miracle of Cardiff that is… Miraculously, 69 balls later, both Panesar and Jimmy Anderson were still at the crease. Test match saved and England went on to win that five-match Ashes series by two games to one. Without that opening draw, the whole complexion of the series may well have been entirely different.

Anderson, England cricket’s all-time leading wicket taker, said, “the way he (Panesar) batted gave me confidence.” Panesar himself said that he “felt calm at the crease despite the pressure.”

This was without doubt Panesar’s greatest moment with a cricket bat.

He admitted: “my clarity of thought was so much better, and I stuck to a simple game plan. I tried to make the moment the same despite the game hanging in the balance.”

The Psychology of “The Zone”

So how did he achieve this feat in the most intense cauldron of pressure?

Stephen Daltrey, a renowned international psychotherapist who helps sports people overcome anxiety blocks in order to achieve success, explained to Panesar over a Zoom chat this week, saying: “Self-awareness is the goal of these skills which are based around unblocking anxiety. Blocks are typically there to protect ourselves and often start forming when we are younger. People with anxiety also will typically carry this fear into other areas of their lives.”

Daltrey uses techniques to look in more detail at processes and triggers.

“In sport this helps you get from the emotional state to a logical state. People today are more externally referenced, meaning they are constantly looking outside themselves for validation. The idea of coaching is to make athletes become more internally referenced.”

He went on to describe how important it is to try and understand the background of how a person currently presents themselves, as sometimes your biggest opponent is yourself.

Skills and psychology should be intertwined; you can be the most skilful, but pressure can change everything. Take the US Masters in 1996 when Nick Faldo overturned a six-shot deficit against Greg Norman to win on the final day. Norman crumbled under the enormity of pressure on that final Sunday at Augusta, and never again won a Major title.

Many professional golfers now employ sports psychologists to help them achieve success, and  grow into well-rounded people. Being able to move through a learnt process without blocks is key to golf. A golfer might be on the course for three to four hours, but they might only play 65 shots in that time. The ability to switch on and off is therefore key in both golf and cricket. 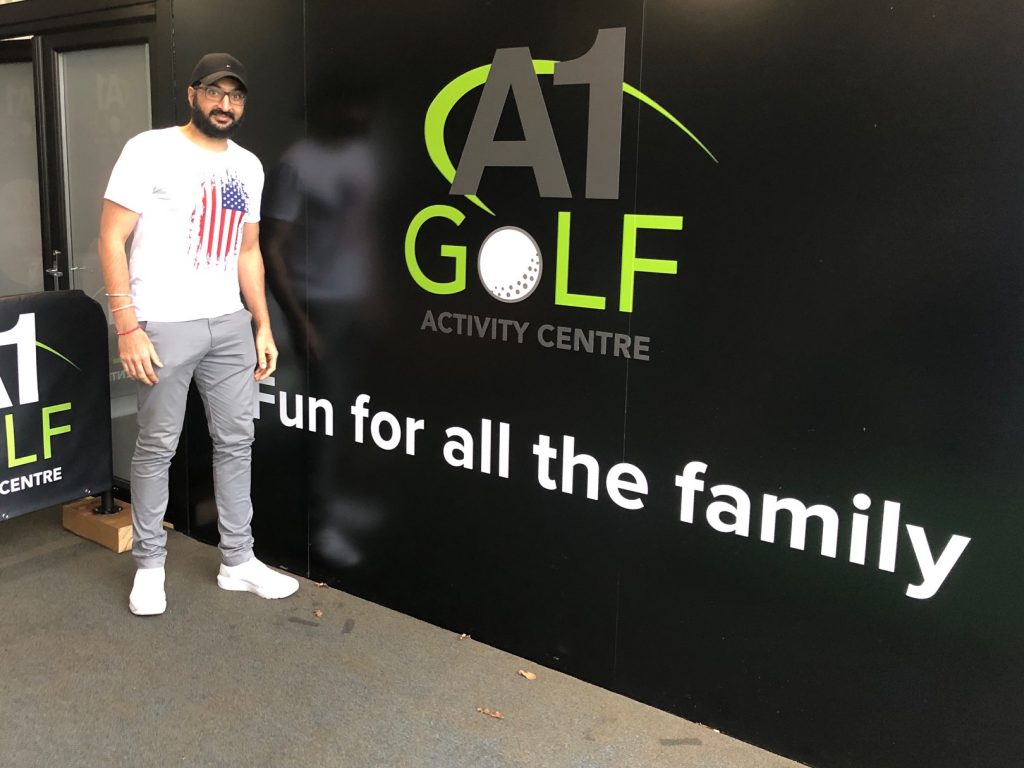 “Relationships with teammates can also help you switch off,” added Panesar.

“There has to be a fun element in the field or when batting. You must take your mind off the pressured situation and the chaos that might be happening around you. Get out of the context and into the moment.”

It’s a similar story in golf, as we often see players switch off with their caddies or even engage with the crowd. You simply cannot maintain high levels of concentration 24/7.

There are many parallels between cricket and golf. As an experiment, Panesar, who had barely picked up a golf club in his life, was given a swift lesson, before being handed a driver. He was then greeted with the words… “On the tee, from Luton, England……Monty Panesar!!”