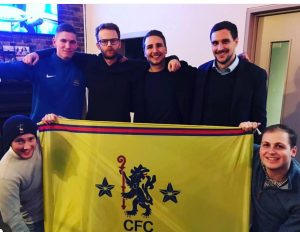 My first experience of a Chelsea “hardcore” fan showed the lengths someone will go for their football club. As we headed for the exit of the bar he felt the urge to embezzle a stapler on his way. My reaction was a shrug to ask “why?”. His response was short:

“I need it for the banners.”

Sports Gazette spoke to the founder of We Are The Shed, Richard Weekes to find out about the work that goes into planning displays and banners on matchdays. We Are The Shed is a movement for and by Chelsea supporters who sit in The Shed, their main objective is to improve the atmosphere visually and vocally. They are based in the Shed End which is the south stand of Chelsea Football Club’s Stamford Bridge.

We Are The Shed is funded by the supporters. This puts supporters in a position to be responsible to create a good atmosphere. The ethos is if the supporters want something, they’ll put in a few quid to support it. Large donations aren’t really welcomed, as many wealthy fans often try to make just one large donation.

Richard is a season ticket holder who travels home and away. He can still feel the jubilation of Frank LeBeouf hitting that 30-yard screamer in the 89th minute against Leceister in 1997. He started this group on the back of Jose Mourinho’s comments after a 2-1 win against QPR in 2014.

“It’s difficult for us to play at home because playing here is like playing in an empty stadium,” Mourinho stated.

The comments ignited a spark in Richard to start a project that has grown astronomically over the last five years. It wasn’t easy because everyone had to get on board in order to make it a success that it is today.

“It involves a culture change amongst the people that go to the stadium but also because 98% of the seats in The Shed and Matthew Harding stand are season ticket holders. So it’s not as simple as going, “who wants to move to a singing section?” because they won’t be able to physically move these season ticket holders and it’s their right to want to sit there, it’s their seat” he says.

The group now consists of 125 members which has a core group of seven people who make all the overall decisions.

Their regular interactions and acknowledgments from club legends like John Terry, Didier Drogba, manager Frank Lampard, assistant manager Jody Morris, and club captain Cesar Azpilicueta make it all worthwhile because a lot of work goes into curating such a project.

The team behind the team 💪

We've got our Chelsea back 💙 pic.twitter.com/enFTaRa09s

Their good work and overall consistency helped create a positive relationship with the club, which was not always the case.

“Originally I tried to scare them into thinking we were bigger than we were so that they would listen and the initial relationship was difficult because they thought well who are these guys? we are just going to keep saying no” he says.

He tells me that the club has become very helpful whenever they can, like replacing broken or worn out banners. Planning something different and big like mosaics or using plastic poles longer than 90cms can take more than two years as everything they do must be signed off by the Premier League and UEFA.

This relationship has also decreased the preparations for games. When they started, everything was had to be set up on matchday.

“Four or five years ago we actually used to get to the ground early, we’d get there at 9 am if it was a 3 o clock kick-off.” Richard states.

He says that big displays like the “Welcome Super Frank” vs Leicester this season took them seven hours of preparation with a group of 25 people. When things go wrong, the club is also very helpful.

“The recent Munich(mosaic) one was done on a Sunday when the game was on a Tuesday.  We were there with about 30 odd people, we laid it out and half of it blew down then about 15 people had to meet earlier on Tuesday after to go back do it again. The club gave us some bodies too which was quite helpful” he said.

The Sports Gazette editor Alex Bartlett, as a West Ham fan often finds himself in the away end at Stamford Bridge, which is next to The Shed.

“Year on year my favorite away day of the season. We are in full voice because it’s a rivalry and the home fans are always up for a derby day. The second you hear the liquidator music, you know you are in for battle”.

We Are The Shed not only focuses on the atmosphere but runs a bit of fundraising, they raised money for charity after Ray Wilkins and Roy Bentley died but normally only raise money for displays. When former captain John Terry reached out offering to donate for the Roy Bentley display, We Are The Shed realized the range of their impact.

”He messaged me on Instagram and called me and said he appreciated us raising a lot of money for Ray Wilkins, he didn’t want people to give more money because it’s their hard-earned money so he wanted to donate the rest of it,” Richard states.

Richard is positive that We Are The Shed will continue to grow as they slowly try to change the culture in West London. With 12k followers on Instagram and 27.8k on Twitter, the only way is up. With COVID-19 bringing a halt to all sports, he is also happy about the first season under Lampard.

“Most people would sacrifice short term success for long term gain if it means youth players coming through and especially with Lampard at the helm, this was the maximum we were expecting this season which is get fourth place and go a little way in the cup.”