Google reveals all. Whilst England’s encouraging start to the World Cup has got many excited, especially with what looks like a comparatively favourable route in the knockout stages, most superstitious England fans would baulk at any sort of lofty optimism regarding their team’s World Cup. Thanks to Google Trends, however, we can get an accurate insight into the inner psyche of those following the Three Lions back home, via the real arbiter of truth: Google searches.

Firstly, however, it is important to note that the UK isn’t doing a great deal of World Cup googling, proportional to total searches. In fact, the UK is down in 22nd place, with 13% of all searches during the last month specifically focused on the tournament. Whilst this is by no means insignificant, it’s way behind the top five: Nepal (where 55% of total searches are for the World Cup), Jamaica, Trinidad and Tobago, Vietnam and Bangladesh are, proportionally, the most World Cup obsessed nations by Google searches.

So far so good. Nothing to incriminate over-excited England fans yet. However, a trend clearly starts to develop on the days of England matches. The two spikes in the below chart occurred around England’s first two group games against Tunisia and Panama.

And when comparing searches during the matches with those of their opponents, England fans out-searched all three. 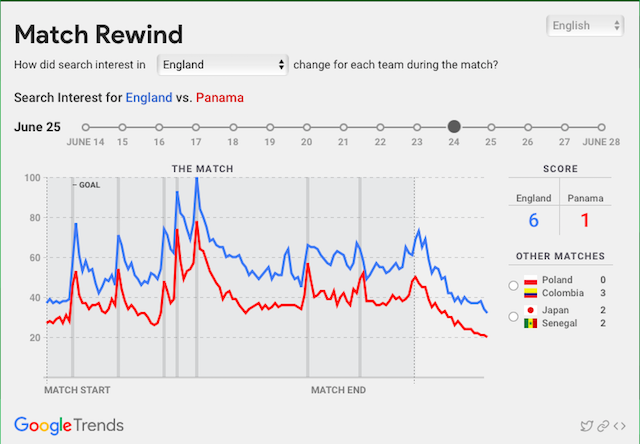 But it wasn’t just World Cup specific searches that increased around games. What else goes hand-in-hand with any modicum of success enjoyed by the England team? Football songs, of course. And the most popular? Well, Google would have you believe that Three Lions, by the Lightning Seeds, is way above the rest.

Perhaps that’s to be expected, and in all likelihood a song about England winning a major tournament would still garner more searches during a tournament, regardless of the team’s performances. This next piece of data, however, perhaps begins to betray the latent optimism of England fans. 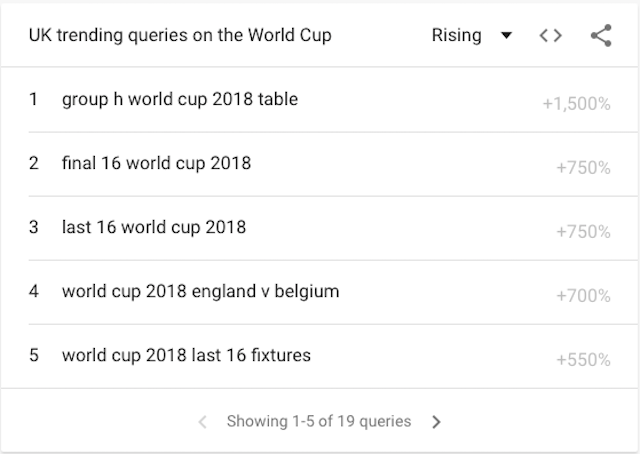 Three of the top five World Cup queries in the UK regard the knockout stages, whilst the most popular search is for the Group H table, a factor that decides England’s next opponents.

Whilst all of the above can perhaps be justified as innocent folly, this last example cannot be discarded as such. As has been established, searches regarding England’s World Cup campaign peak during and around England games. In the case of this chart, it seems as though, in the wake of impressive wins for the Three Lions in their first two group games, some took things a little far. The search term for the below data? Football’s Coming Home.