Posted on 12 October 2018 by Timothy Hammersley

In some parts of the country, rugby league is seen as the poor relative of the favoured rugby union. In Warrington however, league is engrained in the town’s culture, with the beloved Warrington Wolves a source of pride for locals.

It is no surprise then that Warrington and the wider rugby league community have fully embraced the team’s development with the advent of a Warrington Wolves Physical Disability Rugby League (PDRL) side.

PDRL differs from rugby league in that there are nine players per side — two of whom are able-bodied — and a further two wearing red shorts to indicate they are tag only and cannot be tackled. Able-bodied players can only run ten metres with the ball and cannot score. The pitch is the same length, but is narrowed by ten meters on each side and knock-ons do not count. All other features of the game remain the same.

Jason Elkaleh, the team’s captain, told the Sports Gazette about the process of establishing the PDRL side and how they want to capitalise on this year’s success. 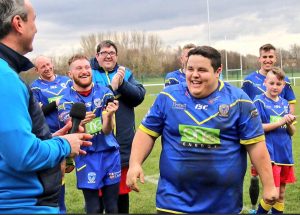 “After the club got in touch it very quickly snowballed from there,” Elkaleh said. “We had an open trial where about 10-12 people showed up and from there we went into our first game.”

The side’s first run out was against the PDRL side from fellow Super League club the Leeds Rhinos. Despite losing that match 22-10, Warrington have won every game since, including victory in a World Club Challenge game against South Sydney Rabbitohs.

“Everything progressed quite naturally,” says Elkaleh. “We went from open trials at the park to using the club’s own training facilities and playing consistently against other PDRL sides from around the country.”

Elkaleh continues: “Having beaten everyone there was to beat in the UK, we very much pride ourselves on being the best team in the country, and now we’ve gone over to Australia, beating South Sydney Rabbitohs who won their league. We feel like the best team in the world.”

One of the catalysts for the success of the team was the early involvement of Australian comedian Adam Hills. After getting in touch with his childhood club the South Sydney Rabbitohs, the star of Channel 4 show ‘The Last Leg’ was directed to the Wolves.

“We wouldn’t have had the exposure we’ve had without Adam,” Elkaleh admits.

“It’s good to have that kind of exposure for the game especially when it is at this birth stage where it’s just getting going. He’s been willing to use his profile to further the sport, purely out of love for Rugby League. 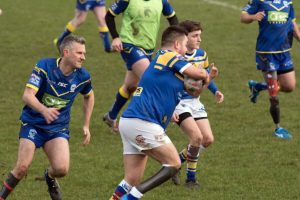 “He’s part of our tightknit team, joins in with the banter, and gives as good as he gets. He’s just one of the lads really.”

Given the success of the team, there are plans to formalise the competition in the UK and push PDRL to a place of parity.

On this topic, Elkaleh says: “The next plan is, together with the Rugby Football League, to get a proper league going as at the moment we’ve been playing friendly matches but obviously we’re keeping our own little league tables.

“Setting up the league is going pretty well, as PDRL has been really well embraced across the game, and most Super League teams have committed to having PDRL sides. Alongside that the main aim is to have an England side for the 2021 World Cup.

“The 2021 World Cup is in England, and we’re looking, alongside the men’s and women’s tournaments, to have a PDRL World Cup, giving us the opportunity to play against the likes of Australia and New Zealand.

“That’s the aim for most of the lads now, to knuckle down and get a league, get our fitness up and hopefully get picked for England.”

One of the keys to success of PDRL is how well it has been embraced by the establishment in the sport. One only needs to look at how long it took Manchester United to formally re-establish their women’s team. Hesitancy at the board level can stifle the progress of subsidiary branches in an elite sports organisation.

“We’ve been quite lucky in a way, as the club has completely embraced us,” Elkaleh said. “Everything from training facilities to coaching staff to kit has been provided by the Wolves Foundation and the club.”

“We fundraised for our trip to Australia, but the club were very supportive with the owner, Simon Moran, and the board of directors putting in a quite hefty chunk of money in towards our fundraising target.”

With the prospects of a formalised league and a possible world cup on the horizon, the future of PDRL looks very bright. The success of Elkaleh and his teammates over the last year and the positivity with which they have been met by the Rugby League establishment, shows that PDRL is on the map and will only continue to grow in the years to come.