Posted on 8 September 2020 by Thomas Clark 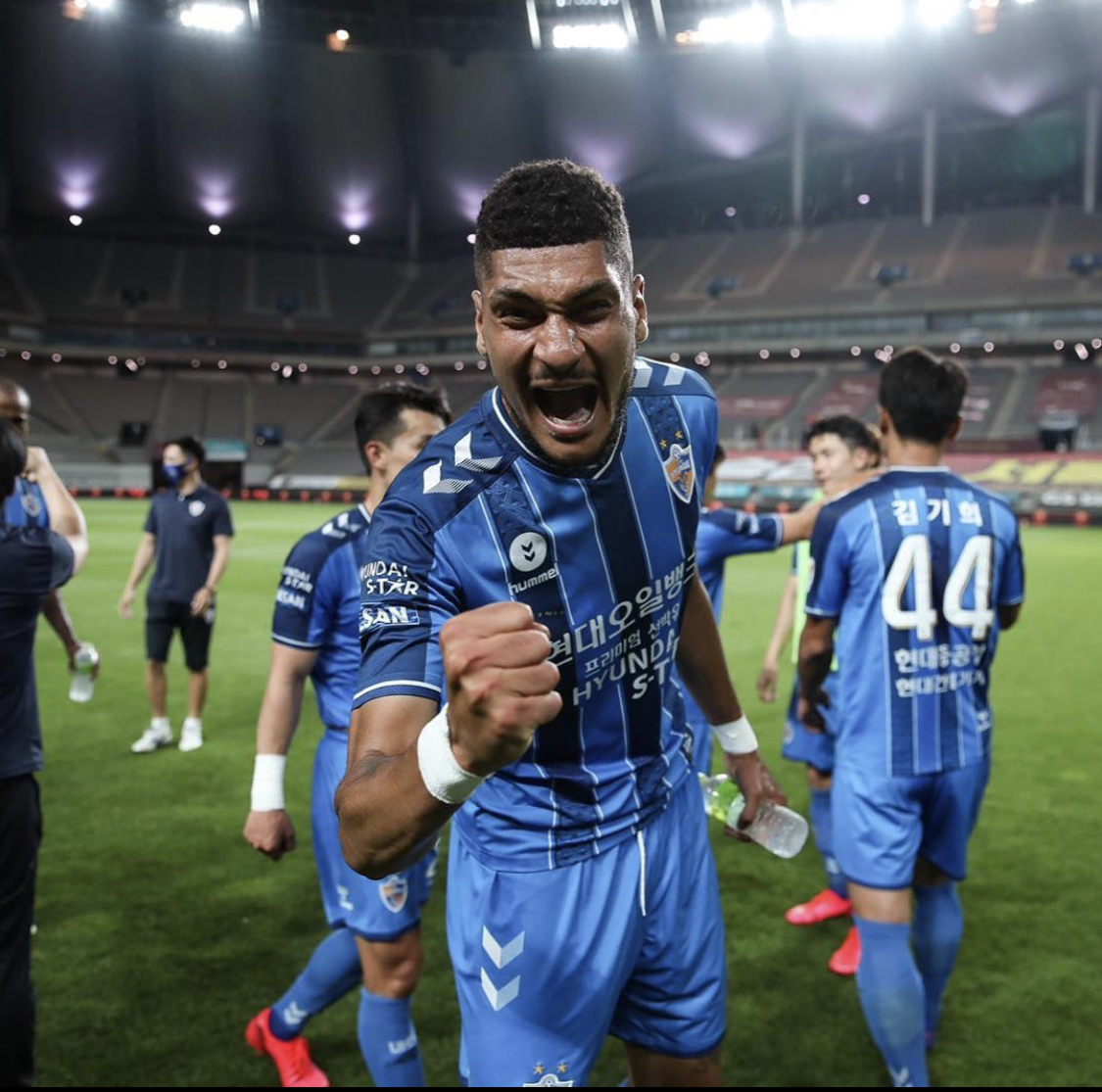 From New York to Ulsan via half of Europe, Bjørn Johnsen is no stranger to moving football clubs and continents.

The 6’5 Norwegian international moved to South Korea at the start of 2020. However, due to the effects of coronavirus he is yet to feel like he has got the most out of his time in Korea:

“Can I really say how is Korea? I won’t know Korea until covid is done,” said Johnson.

Shortly after Johnsen and his wife Veronica arrived in Korea coronavirus struck the country and life changed for everyone:

Another shock loss for champions Jeonbuk, 3 points for Incheon thanks to a hattrick by Mugosa the Moustachioed Montenegrin. We also caught up with Bjorn Johnsen, Ulsan's Norwegian international striker … https://t.co/hOGz1vr66Z

For Johnsen it is small things that are different, everyone is wearing masks so he has rarely even seen people’s faces other than his teammates and club staff. This has made it difficult to connect with people outside of football but the striker understands the need for such measures.

He acknowledges the safety this has brought and comments on how prepared Korea was for the pandemic in comparison to Europe, and this has made both himself and Veronica live a “pleasant life and we have been able to relax a little bit.”

One thing that Johnsen was not prepared for was the extreme climate in South Korea:

“The whole city has been ravaged by the typhoon, so it’s kind of a little bit weird,” added Johnsen. “Glass on the windows of the buildings has been destroyed.”

“My building was swaying from side to side and we had no electricity.

“My wife and I couldn’t sleep all night and then I get to training and it is 37 degrees and the humidity because of the rain from the night before, it was just unbelievable.”

One look at Johnsen’s social media and you can tell this is an incredible specimen of a man but even for him the Korean summer is proving challenging: “You might be in the best shape of your life, but you just can’t breath.

“It’s nothing to do with how physically [fit] you are, this is to do with not being able to breathe. I think that is the difference between playing in Asia and in Europe,” said Johnsen. 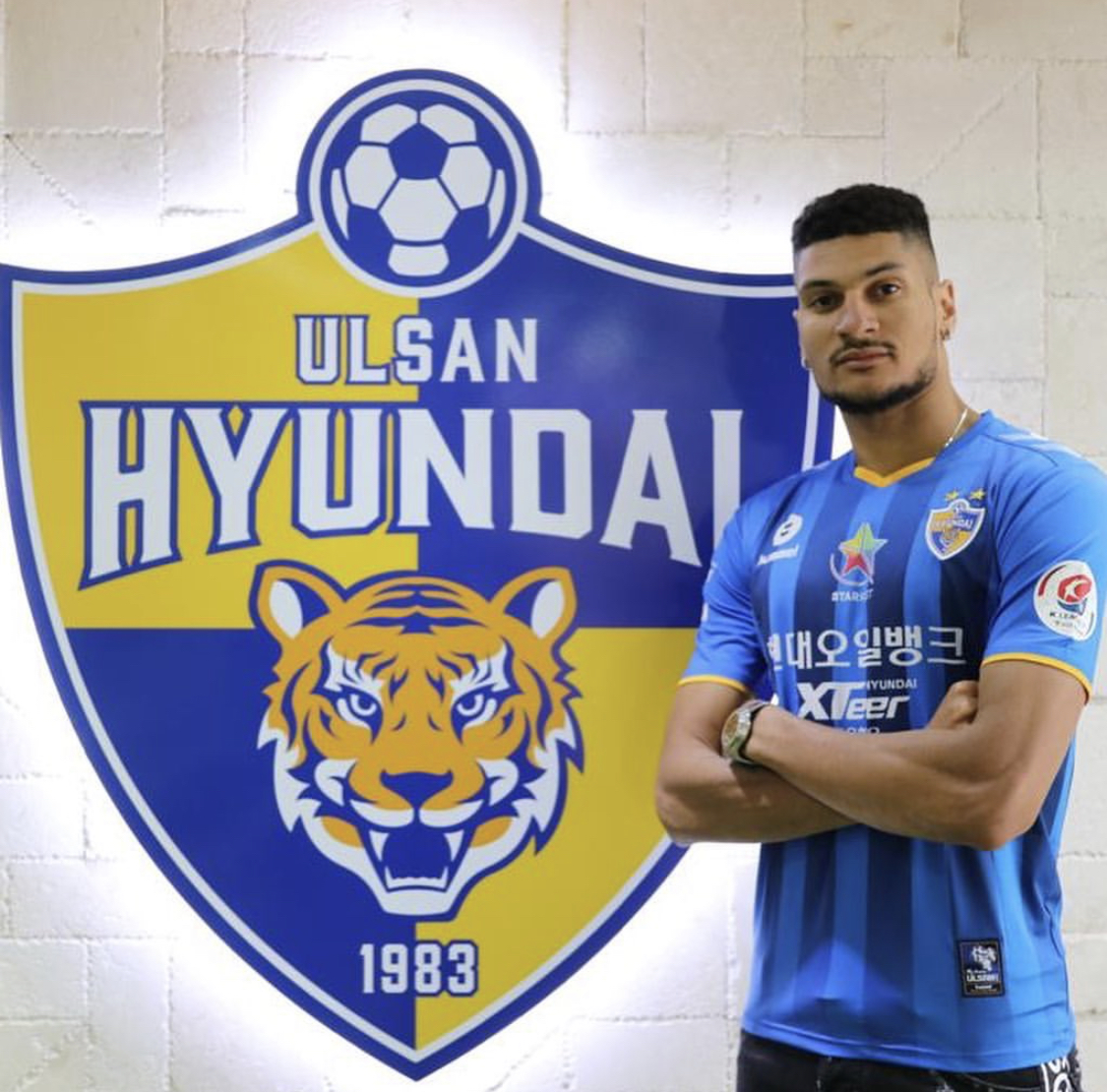 Unfortunately for Johnsen his move has not quite gone to plan… yet.

He has only managed to start a handful of games for his new side and currently is playing understudy to Júnior Negrão.

The Brazilian striker is in the form of his life, scoring 22 goals in just 19 games and has kept Johnsen out of the starting eleven.

Johnsen wants to be playing more often but understands the situation: “You sit there and feel happy the team is winning, but you don’t want the other guy to score all the time. But you know, that’s the feeling I have, but I also really like him as a person so I can’t be mad.”

Johnsen shows a maturity about his situation that he admits he once might not have had: “If I was 22 I’d be pissed off, but I’m 28, I know how football is.”

For now Johnsen is biding his time, training well and ready to be called upon when Ulsan need him: “The most important moment is now [until] the end of the season, because last year it was the same thing, [Ulsan] were winning by four points, and they lost the championship,” said Johnsen.

“It’s a really big deal for the club that we haven’t won [a league title] in a while. I think the team hasn’t won in 15 years or something like that. There’s a lot of pressure. But I think right now we’re setting the pace and it is really about scoring first and being able to control the game because we are a really good passing team.”

Asked if he thinks Ulsan can win the league this season, Johnsen is firm in his one word reply… “Yeah.”

And Johnsen is ready to play his part: “The Champions League is coming, he [Júnior] can’t play every game. So I know I will get my chance.”

Having not won a league title in his career Johnsen is determined to help Ulsan claim this year’s K League championship. And if he does so from the substitutes bench so be it:

“If we win the championship, I’m not complaining [about the lack of starts], I get a bonus, I also get my first championship and I will know I have contributed.”

As for next season, Johnsen is unsure what the future holds.

Before signing for Ulsan, Johnsen was under the impression Júnior would no longer be at the club and that he was coming in as the main striker.

Júnior’s move fell through and with coach Kim Do-hoon sticking to a lone frontman Johnsen’s gametime has been significantly less than he hoped for. And in order to keep himself in the Norweigan international setup Johnsen knows he needs to be starting games and scoring goals.

Could the self-described ‘nomad’ be on the move again before the 2021 season begins?

“Maybe I have to think about if I should be continuing here if Junior’s going to stay. If he’s not going to stay I’ll be able to play next year, we’ll see I don’t know. But I obviously need to be playing to play that tournament [the European Championships], if we make it to the tournament.” 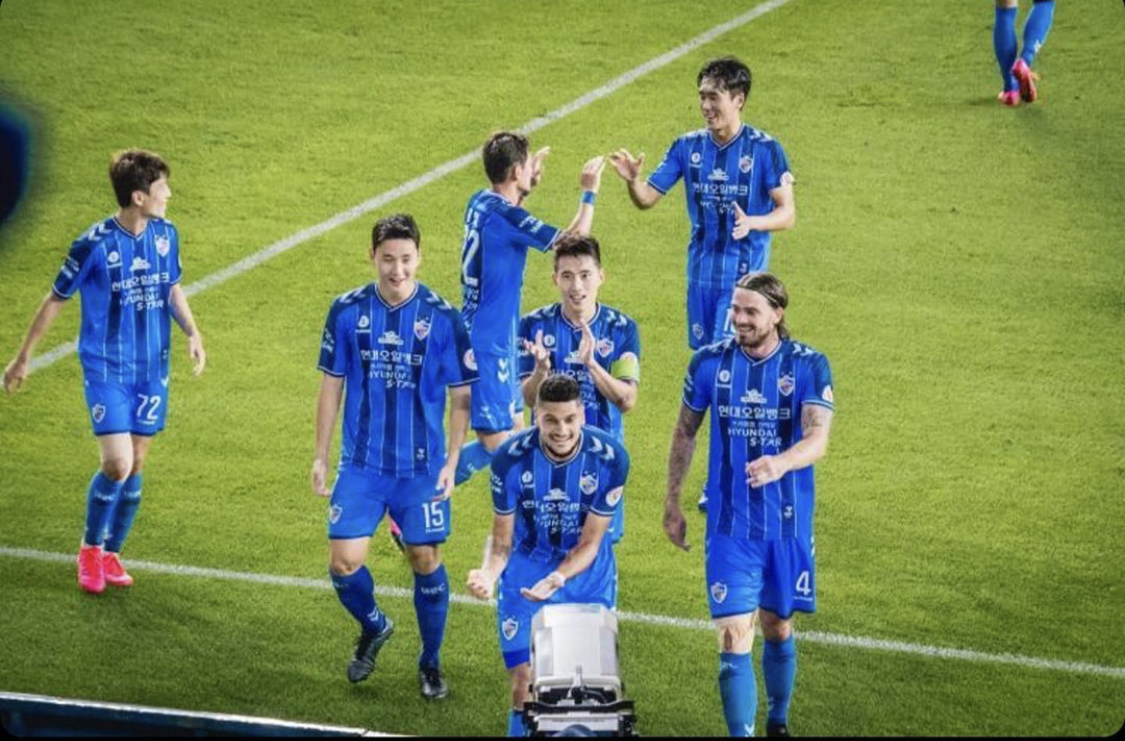 For now Johnsen’s concentration is on two things, the K League title and the upcoming birth of his first child. The baby celebration has been used for his most recent goal and he hopes to be cradling the league trophy on November 8 with Veronica by his side.

To hear more from Bjørn Johnsen and what is going on in the K League check out the Gazzetta Football Korea podcast.