Posted on 1 October 2019 by Thomas Clark

Brentford go into the second of their three matches in seven days in high spirits after a comfortable 3-1 win over Barnsley on Sunday.

The Bees will face a tough game against an in form Bristol City, who remain unbeaten in eight league matches, since defeat in the first game of the season.  Brentford manager Thomas Frank knows how difficult a side they will be to face, but has confidence in his teams ability.

“We know it will be difficult, but we have a big belief that we are getting closer, and closer to the level we think that we can play at, and honestly I think that we will only get more solid and better.” 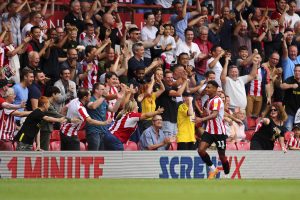 Brentford’s inform striker Ollie Watkins netted a hat-trick on the weekend and sits top of the scoring charts in the Championship.

With all bar one of Brentford’s league goals this season coming from Watkins, the pressure is on him to keep up his fine form.

However, fellow striker Nikolas Karelis is back to fitness and Frank believes this will add a greater goal threat in the future. “Ollie can be the number ten and be as dangerous and score goals from there, so yes potentially they could play together,” he said.

When questioned about squad rotation with so many games in such little time Frank admitted it will be a difficult decision. He explained it is tricky to balance the quick turnaround between games and wanting to carry on the momentum from such a positive performance and result on Sunday. He added, he has yet to decide whether to change one, two or three players for tomorrow’s match or to go with the same team on Wednesday and again on Saturday.

Frank is excited to be back home and confident in his sides ability to get a result, stating: “We’re really looking forward to this game under the floodlights at Griffin Park. We know we’re good at home and Bristol City know that as well, they know it is going to be a tough test for them as well.”

Frank was very positive about the home crowd and what they can bring to his side, “The fans in general, but especially at Griffin Park they have been amazing this year. I think they’re always good, but this year I think they took it a notch or two up in terms of atmosphere,”  he said.