The heaviest cars in the history of Formula One are about to get even heavier. This continues a trend of yearly gains, and no New Year’s weight loss resolution can seem to reverse it.

Next year the minimum weight for F1 cars will rise to 790kg. This means they have gained roughly the weight of a giant panda since 2014. Sadly, the solution to the problem is not as black and white.

This trend of increasingly heavy cars has been driven by a desire to remain relevant. F1 has fashioned rules in pursuit of a sustainable and exciting version of the sport. But in trying to pull its weight, F1 has added more bulk to the cars in the form of a heavy V6 turbo-hybrid engine.

Go back a few years further to before the hybrid era and the difference in weight is even more striking. In 2009, the minimum weight of an F1 car was 605kg. That is 185kg less than it is predicted to be in 2022.

The rules for the minimum weight of an F1 car do not factor in the fuel added to the cars. 2009 was the final year of refuelling. This means that the lightest cars in 2009 would have been about 645kg, running on around 40kg of fuel at the start of a grand prix.

Today, the cars hold over 100kg of fuel at the start. As a result, next year’s cars are going to weigh around 900kg on the opening lap.

Whilst the image of a 250kg grizzly bear driving a 2009 F1 car is outrageous, it does give an idea of how ridiculous the scale of the weight increase is. However, if you break it down into sets of rule changes, the weight gain makes more sense.

Stepping on the scales 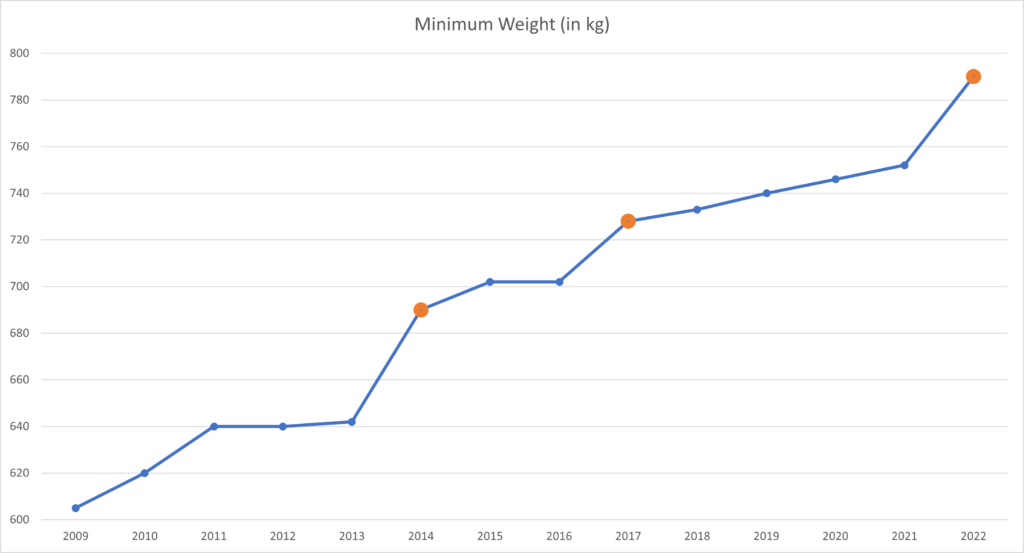 From this graph, it is clear the introduction of hybrid technology in 2014 accelerated this trend. Even though the kinetic energy recovery system (KERS) increased the minimum weight to 640kg in 2011, the first considerable weight gain came in 2014 when F1 radically changed the rules for the car. These rules introduced the V6 turbo-hybrid engine, resulting in a massive 50kg increase in minimum weight to facilitate the new engines.

Since then, further rule changes have continued the trend. In 2017 the cars weighed 728kg as F1 made the cars bigger and faster – another example of F1’s efforts to remain relevant.

The minimum weight increased further in 2018 to allow for the introduction of the halo. The year after that, a new 80kg minimum weight for the driver, their race gear and their seat brought the weight of the car up to 740kg.

Another engine minimum weight increase for 2021 and bigger tyres make the cars 752kg this season. Next year, following the addition of 18-inch wheels and some standardised components to save costs, the cars will reach a new peak weight of 790kg.

So, what does this all mean? Today’s F1 cars are the quickest they have ever been, but the extra bulk is noticeable in their movements. A lack of agility in slow corners does not lend itself to exciting wheel-to-wheel racing. The increased weight also affects the tyres, and F1 is fast approaching the limit of what tyre technology can withstand.

Lewis Hamilton, who has raced in all versions of F1 car mentioned above, has suggested that a return to refuelling could be the solution to both the increasing car weight and the stress placed on Pirelli’s tyres.

The seven-time world champion made the suggestion after qualifying at the French Grand Prix. In response to two tyre failures at the previous race in Azerbaijan, Pirelli specified higher tyre pressures than normal.

“It puts a lot of pressure on Pirelli, to continue to deliver us performance, but also safe tyres,” said Hamilton. “Usually in our discussions we’re just always asking…safety is so, so important and we’re seeing more and more of these incidents. We’ve got to make sure we work towards not having those in future.

“If that means like next year maybe going back to refuelling, so the cars are lighter or something like that, so we don’t put so much pressure on these tyres for safety, that could be a good thing.”

Hamilton has also pointed out that as the cars get heavier, the energy wastage and amount of fuel required also grows. Crucially, this counter-acts F1’s push to be more sustainable. Also noteworthy is that the minimum weight of the engine rose by 5kg in 2021 for cost-saving reasons. A long story short: behind the weight gain lies many competing agendas including driver safety and financial security.

There lies a possible solution to this weighty problem in Hamilton’s suggestion of refuelling. But what is certain is that the situation will not change without a radical rethink of not only what F1 wants its car to look like, but also what sort of racing fans want to watch.