Posted on 18 November 2018 by Darren Barnard

As the oldest recorded town in Britain, it’s difficult to produce many more firsts for Colchester, the former Roman settlement. When Cage Warriors came to Charter Hall, though, it marked the first opportunity for Europe’s top MMA fighters to entertain the Essex crowd just as their Roman counterparts did.

For James Webb in particular, it was special. Having spent the majority of his life in Colchester, the 185lb fighter emerged to a raucous atmosphere, with every fan rising to their feet.

This reception was nothing compared to the ovation received when he stopped veteran Jason Radcliffe in the first round — a win that put him in contention for the middleweight title.

Commenting on the support from his hometown crowd, Webb told the Sports Gazette: “They’ve been supporting me everywhere for years. I want to put Colchester on the map and do something real big.”

Webb landed what appeared to be an innocuous left hook, but several replays later proved that it had landed behind Radcliffe’s ear, cuing his legs giving way from underneath.

He said: “It was a shock. I didn’t even know what was going on. If they’re not tapping out I don’t think it’s a win.” 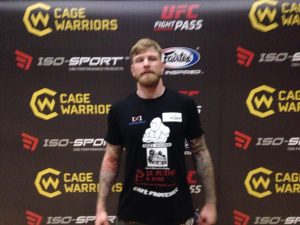 Webb is now on a four-fight win streak and was clearly delighted to gain a victory with his striking, building on his already impressive ground game, including a well-executed rear-naked choke against Pelu Adetola at Cage Warriors 95 back in July.

Despite Webb’s win, there were initial concerns that the night wouldn’t be as thrilling as recent events, especially after Ross Houston’s dramatic welterweight belt win in Birmingham and Cage Warrior’s biggest card in history approaching in three weeks in Cardiff.

Additionally, flyweight champion Nathan Greyson was scheduled to headline the main card with the first defence of his title against SBG Ireland fighter Blaine O’Driscoll. But the champion withdrew from the fight after he refused to make the 125lb weight limit in the wake of the UFC’s decision to relinquish their flyweight division.

It’s unclear whether or not Cage Warriors president Graham Boylan will strip Greyson of his flyweight belt.

Nonetheless, the card delivered with four of the main fights ending in the first round. This was aided by Cory Tait’s ninth professional career win and ninth stoppage when he delivered a devastating left-hook to Gavin Kelly’s liver, immediately dropping the bantamweight fighter in the co-main event.

The polish fighter landed a blow in the first minute that Burnell later admitted woke him up. Thus, Burnell — the 10-3 fighter — quickly took over when he secured a takedown that proved decisive in the course of the fight, leading to a rear-naked choke.

One of the most eyebrow-raising performances of the evening, though, came from another fan-favourite — Jamie Richardson — who sliced up Phil Wells with some viscous elbows in the opening fight of the main card.

Richardson was in desperate need of a win after already losing twice in 2018 — once via rear-naked choke to Aaron Khalid at CW97 and previously a unanimous decision loss to Sam Boult at CW92 in March.

Richardson clearly has the expertise to trouble fighters in his division, though he weighed in 1.6lbs above the welterweight weight limit on Friday and was therefore fined 50% of his purse for the evening.

Rajewski also missed weight for his fight so he similarly had to give up his purse, with 40% of it going to their opponents and the remaining 10% going to a charity of their opponents’ choosing. 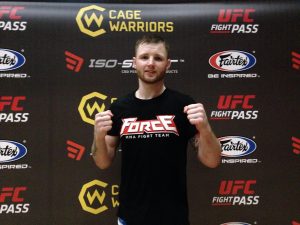 On the issue, Richardson said: “We did discuss moving up if I didn’t get a win tonight, but the problem is those middleweight guys are huge compared to me. It’s just that last kilo I’m really struggling with and that’s where I need to make up for it in those 12 or 13 weeks before the fight.”

‘Young-Gun’ Richardson continued: “I have been doing a lot more wrestling, ju-jistu, controlling positions and trying to get comfortable in bad positions on the floor.”

The remaining fight of the main card was an all-London match-up between Nathan Jones and Brad Wheeler. Jones is notorious for his submission game, as nine of his eleven victories prior to CW99 came via that method.

He displayed an excellent all-round performance and outclassed Wheeler in every discipline. A couple of crucial takedowns in the latter stages of the fight in particular would have convinced the judges to give the former Bellator man the win.

Mehdi Ben Lakhdhar deserves an honourable mention, as he, arguably, produced the performance of the night in the opening fight of the professional prelims against Craig Edwards with some world-class striking that will likely push the 4-0 fighter into main card fights in the future.

Steve Aimable, too, impressed against a determined Joshua Abraham in the final fight of the prelims that would have resonated on the Cage Warriors matchmakers.

Jason Radcliffe vs James Webb (middleweight) via TKO (punch) after 1:26 of Round 1

Cory Tait defeats Gavin Kelly via TKO (body shot) after 2:40 of Round 1

Mads Burnell defeated Lukasz Rajewski via submission (rear-naked choke) after 3:23 of Round 1

Jamie Richardson defeated Phil Wells via TKO (elbows) after 4:40 of Round 1

Mehdi “Iron” Ben Lakhdhar defeated Craig Edwards via TKO (knees and punches) after 3:02 of Round 1

Eduardo Gonzalez-Ayala defeated Gabriele Varesano via submission (armbar) after 1:26 of Round 1

Chey Veal defeated Mik Pereira via submission (armbar) after 2:54 of Round 2

Ian Garry defeated Guolaugar Einarsson via TKO (punches) after 2:37 of Round 1