Architect Chi Bahtia works at HKS, a firm specialised in developing sports venues into an “Entertainment Destination Project.” He discussed the plans for the new Inglewood stadium in Los Angeles and the trend towards “Americanising” sports stadiums worldwide.

Increasingly, international sports clubs are looking to the US hoping to understand and copy what many American clubs are seemingly so good at: generating income through their stadiums.

The stadium at Hollywood Park in Inglewood, scheduled to be finished in 2020, will be the most expensive stadium in the world. It is really pushing the boundaries of what any stadium has previously done. The Los Angeles Rams’  and the Los Angeles Chargers’ new home will house three venues under one roof: a 70,000 seat stadium, a multi-purpose plaza and a performance centre.

The 2,7 million square feet of facility have an overall capacity of 100,000 seats for special occasions like the Super Bowl. It is also designed to host Collegiate Bowl Games, Moto Sports and Extreme sports and can just as easily host the Oscars.
In 2028 the stadium will host the Olympic opening ceremony.

“Finding the right location for an accessible sports stadium in LA was challenging. The city is pretty much a series of cities and access to freeway exits and entrances were therefore vital,” Mr. Bahtia said. LA’s future metro plans also had to be taken into account.

The stadium is being built in Inglewood, three miles from the LAX. It has to be sunk 100 feet into the ground due to height restrictions caused by the proximity to the airport. The owner and the architects did not want to create another “white elephant,” and the building will be low-profile and visually a good neighbour to its surroundings. It is also thought that the stadium and its adjoining venues will benefit the local community of Inglewood by creating a hub of activity and retail. 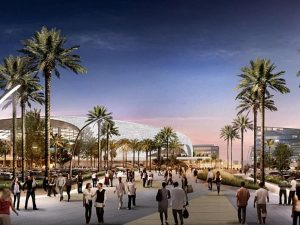 Describing part of the design process, he said: “The language of the form comes from everything from the curve of the Californian coastline; the curve of a wave, to the curve of a Ram’s horn. The landscape architects created a horticultural experience from the desert to the mountains using only flora from California.”

The stadium will be adjacent to a lake and there will be a promenade and public art leading into the gardens surrounding it.

“It is 365 access. On non-event days it feels more like a civic monument than an entertainment or sports building, I would argue.
“It is welcoming and there are no gates,” said Mr. Bahtia.
On the plaza, a bistro will be open all year round.

He described the stadium as a mixed retail-recreational zone, with the commercialisation aspect as one of the main drivers for its design. “You get the best value from a multi-purpose stadium,” he said. This ties in with what he identified as one of the trends towards “Americanising” stadiums: “More effort and emphasis is put on infrastructure than sporting success,” he said. “There needs to be a design strategy for every revenue stream your stadium has touch points with.”
Brand, design and business can tie in with sports through shopping, hotel accommodation, conference facilities, food and beverage.

There is an obvious shift from the past, in the UK, when sports and not entertainment was seen as the crux.
“With improved infrastructure, match day attendance will increase and more fans will go to the games. The stadium revenue can feed into the transfer money and the wages, which is where the money is at the moment,” he continued.

Pre-match revenues is another aspect Mr. Bahtia points to as key for the success of American stadiums.
“Pre-match revenues are problematic for a lot of UK and European football clubs, especially in old stadiums in dense, residential areas.
“For example at Fulham at half time, you can’t go to the bathroom and get a drink in 15 minutes. “Post-game, you have so much anxiety about getting out fast that you leave early.”

He continued: “American sports are so segmented and there are so many opportunities for breaks. It is the most key component that Europe and the rest of the world want to copy from the US.
“English football doesn’t work the same way though. Fans go to pubs before the game and run inside the venue 5 minutes before the match starts because there is no food or beverage that they are culturally used to or want to eat and drink at the stadium.
Revenues from pre-match tailgate, therefore, does not go to the club.”

“How do you get a father and son to come to Old Trafford two hours before the match starts? The behavioural bridging necessary to change that is what we are all working on.
“It’s incentivised. It has to be the same but cheaper, or new and more expensive. But the cultural aspect of that is very difficult to modify,” he explained. 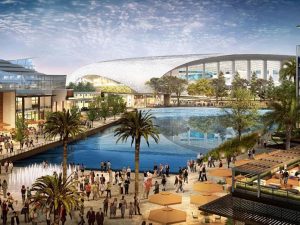 For Inglewood, a lot of emphasis is put on creating the ultimate fan journey. VIP customers will have designated drop-off locations and a variety of premium products such as suites and clubs. The entertainment industry is a very big client in Los Angeles. That is why the Las Vegas-inspired “lux cabana” concept for instance will be aimed at “the wealthy LA party crowd.”
“There will be a night club atmosphere, full wait and seat services. You literally feel like you’re in a beach club. Outside, there will be music and a DJ while you relax in your cabana.”

While general admissions ticket holders may not get access to these “night clubs,” they can also expect a “ridiculous” experience.

“We curated the menus for the food fair by looking at different cuisines in LA. There is going to be open show kitchens for general admissions.”
Laughing, he promised: “No more hot dogs!”

All photos courtesy of HKS