Posted on 16 August 2021 by Nathan Frazer-Carroll 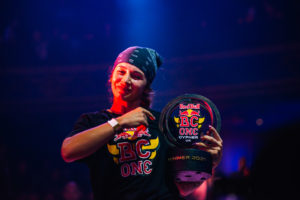 B-Girl Stefani, 27, originally from Ukraine has been crowned the latest winner of the UK Red Bull BC One breaking Finals.

Stefani moved to London as a teenager in order to make a name for herself in the UK breaking scene. Since then she has been involved in a number of high-level competitions and has now won her first ever national title as a breaker.

Every year Red Bull host their BC One Breaking Finals where the best B-Boys and B-Girls come together to compete for the title of best in Britain.

Although this was Stefani’s first victory at the UK Finals, she was almost certain that 2021 was her year: “I was sure I was going to win because I was so prepared but I was quite afraid because anything can happen. During rounds you can fall down, you can screw up, there are so many things that can happen.”

Stefani faced tough opposition in the final round as she faced off against B-Girl Fidget –  an experienced and athletic breaker: “I was sure I had won but I was so afraid to lose at the same time.” Said Stefani.

Describing the feeling of winning such a competitive competition Stefani said: “In the final when they called my name as the winner, I was so excited, I can’t explain the feeling… it was all too much.”

As the Ukrainian born B-Girl accepted her award she told the crowd that her number one goal had been to win the Red Bull BC One finals.

Along with her trophy, Stefani also won the opportunity to represent the UK in the Red Bull BC One World Finals, where she will face off against the best breaking talents from across the globe.

This November, Stefani will compete at the Red Bull breaking World Finals in Gdansk, Poland, where she will show off her unique style and incredible flare.

The B-Girl is also well known for her unique power moves as well as her athletic ability when performing.

Discussing her preparation for the biggest breaking event in the world Stefani said: “In our sport you have competitions around once or twice a month so you always have to be fit and in shape. But the World Finals is the very biggest competition, so I think I’ll concentrate less on my gym work and more on technical breaking training.”

She added: “Usually I go to the gym a lot to build strength but sometimes that means I’ve got less energy and power for breaking, so I’ll avoid that and focus more on stamina and technical breaking training.”

The World Finals in November mark a significant step up from competing within the UK. Stefani’s biggest challenge may be how she can overcome Russian B-Girl Kastet who has won back-to-back World Finals in 2019 and 2020.

Stefani is confident however that her preparation will place her in good stead for the competition: “When I have a goal, I work much harder in what I’m doing. Making it to the World Finals is massive motivation so I will be prepared.”

“I already know that I’m as good as a couple of people who have been to the World Finals so I’ll just stay confident in my work and I’m sure my performances will be strong.” Said Stefani.

Regardless of the outcome, Stefani appears extremely grateful for her accomplishments so far and takes no part of her journey for granted: “I’m originally from Ukraine, and when I started the breaking I wouldn’t have ever imagined that I could be in a World Final, even travel around Ukraine at the time was difficult. I had just seen videos of it online and thought – wow this sport looks like a movie.”

Another exciting prospect for the UK champion B-Girl is breaking’s addition to the 2024 Paris Olympic Games.

Stefani’s dream is to represent Team GB at the upcoming Games, but that is something which still hangs in the balance.

“For now, it’s something I need to figure out because I need a passport at least until 2024. I would ideally like to represent Team GB but if not, I’ll still be very excited to go to the Olympics with Ukraine.” Said Stefani.

Regardless of which flag Stefani represents at the Paris Games, her chances of taking home an Olympic medal appear stronger than ever.

From Ukraine to London, and then to the rest of the world – Stefani’s roots exemplify the fundamental components of breaking culture, Stefani has overcome barriers, worked hard for herself and always performed from a place of love for the sport.

“When I began it was just street dance, I mean literally just dancing in the street. I didn’t even know breakdancing coaches existed!

“To represent either the UK or Ukraine at the Olympics… That’s something really big, and I’m so proud of myself.” Said Stefani.

As breaking bursts on to one of the biggest sporting stages of all time, we can be sure we’ll be seeing more of B-Girl Stefani in years to come.