British long jumper and Olympic hopeful Daniel Bramble was forced to put his Olympic dreams on hold this summer, switching the sandpit for an Amazon Delivery van to fund his career. With an Olympic qualification or the end of his career seeming equally possible, Bramble knew he had to take matters into his own hands. “There has always been that internal drive telling me not to quit, even if on the surface I think I want to.”

I am raising money for Daniel Bramble’s Journey to Tokyo Olympics. Click to Donate: https://t.co/mJeHU3n0Ni via @gofundme

In 2016, Bramble faced funding cuts from both British Athletics and Nike after falling short of Olympic qualification by just one centimetre. This year, his income was cut further as competitions were cancelled due to the COVID-19 outbreak, leaving Bramble in desperate need for money and fast.

“Those around me who didn’t have to stop and work, had an extra year just to train, I went back a year. That felt embarrassing.”

“At the start I was definitely naïve, I thought I could do the hours [9am-10pm most days] and then train. There were so many times I just wanted to quit. With lack of funding and my national governing body not believing in me either and I was really beating myself up.”

Many British athletes fall victim to the cutthroat nature of elite sport, but Bramble was determined to fight for survival by any means necessary. “Being an athlete in a solitary sport like athletics you don’t have a team around you, you’re used to fending for yourself. But I put my pride to one side and set up a GoFundMe page”. To Bramble’s amazement, complete strangers started to hear about his story and the donations started to pour in.

Then, just days after his birthday, the notification came: Gymshark Ltd, £8,875. A direct message on Twitter confirmed the news: 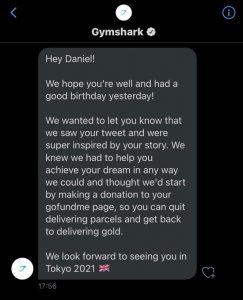 “I didn’t even want to send the tweet. During lockdown I’ve been really quiet on social media; I just felt really embarrassed about having to get a real job to fund my training.”

With Bramble’s target of £12,000 now secured, new training opportunities have followed as the Olympics grow closer. “These donations have honestly gone such a long way, from small things like food but also physio and training camps that I can now afford.”

All the donations, from the seemingly small to the large, have shown that people’s generosity can be the difference in achieving a dream. “It was amazing to see complete strangers believing in me and donating. It still gives me goose bumps; they don’t even know me, but they want to invest in my journey.”

Now three weeks into winter training, Bramble feels back where he belongs. “The whole of 2020 felt like a year with no purpose, a year full of goals just taken away”. With his aims firmly set, training going well, and the support and generosity of so many backing him to succeed, Bramble is back on the “Road to Tokyo”.