Ever since Brighton and Hove Albion were promoted to the Premier League in 2017, they have been often labelled as the ‘plucky underdogs’.

But the resounding 4-0 win against Manchester United highlights that this is far from the truth, they are also set for their highest Premier League finish as they currently sit 9th.

The statistics prove that they are clearly overachieving given their expenditure compared to clubs they are outperforming this season.

With the appointment of Graham Potter and clever recruitment, Brighton have proved to be ahead of the curve for quite some time with few taking notice.

It is no coincidence that former Brighton technical director, Dan Ashworth, is now heading to Newcastle and Graham Potter is linked with every top job in the country.

But how are Brighton competing and outdoing some of the biggest clubs in the Premier League?

Relying on a structured defence

Brighton during the season have endured long-term injuries to defenders Lewis Dunk and Adam Webster who are mainstays in their team.

Despite this, the performances of centre-back Joel Veltman and full-back Marc Cucurella have helped to develop a secure base to start their patterns of play from.

This season they boast the 6th best xG (against) record in the league with 27.4 xG against from open play throughout the season.

From open play, Brighton are statistically competing with the upper half of the league as they have faced the 8th fewest shots in the league with 307 shots faced.

Brighton press across all thirds of the pitch, however, if the opposition beat the first line of the press, it often breaks down with the presence of centre-midfielder Yves Bissouma.

Bissouma is averaging 5.8 tackles and interceptions per 90 minutes which places him in the top 5% of midfielders across Europe.

The eagerness to win the ball back quickly is highlighted through Joel Veltman, as he averages 9.8 ball recoveries p90 which is among the top 7% of defenders in Europe. 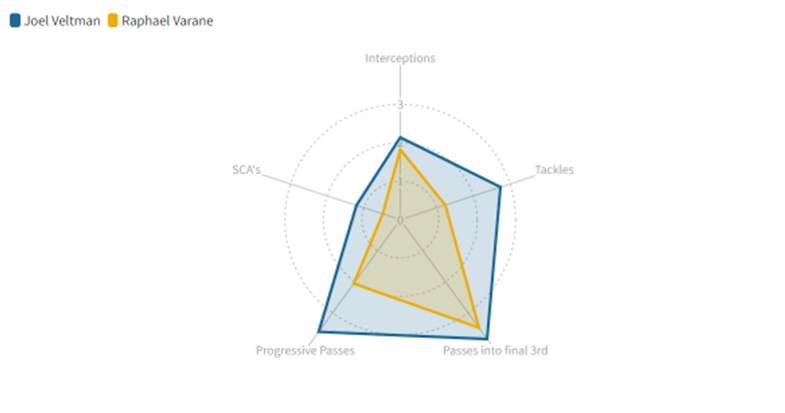 Progressing through the thirds

For Brighton, the importance regaining possession is just as high as the importance on moving the ball forwards with purpose and vertically through the thirds.

This requires patience and the correct decision making in order to decide when to penetrate the opposition, which can be seen in Marc Cucurella and Adam Webster’s numbers.

Cucurella is currently averaging 9.3 passes under pressure p90 which is in the top 1% of full-backs in Europe, whilst centre-back Adam Webster averages 8.2 p90 which puts him in the top 4% of centre-backs.

Brighton decide to progress the ball through two main avenues of progressive passes and dribbles to bypass the opposition press and open up space.

The two chief dribblers are in the form of midfielder Yves Bissouma and full-back Tariq Lamptey. Bissouma makes 1.3 dribbles p90 and boats a 76% success rate amongst the top 9% of midfielders in Europe. 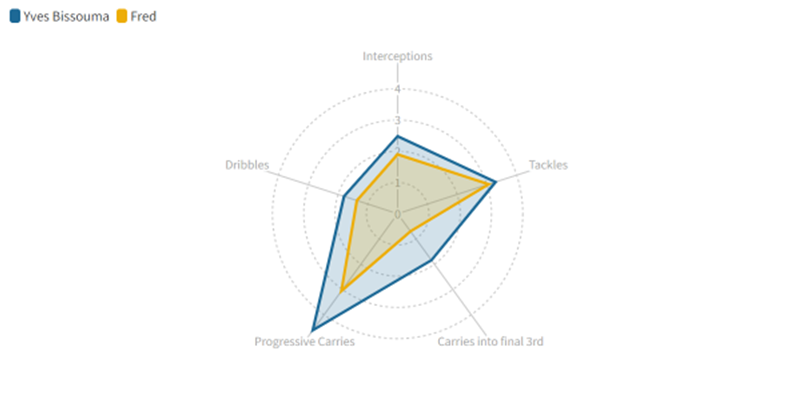 The statistics show that Brighton are heavily reliant on Tariq Lamptey for the majority of their entries into the final third, with 9.2 progressive carries p90 which is in the top 1% of full backs.

Adam Webster is also averaging 5.7 passes into the final third which is in the top 4% of centre-backs across Europe, proves just how important he is to Graham Potter.

Midfielder Alexis Mac Allister’s 3.5 progressive passes received p90, prove that Brighton are successfully beating the opposition press and finding their creative players in the decisive areas of the pitch.

Brighton’s intention is to stifle opposition attacks as early and as high up the pitch as possible, in order to probe mistakes and turn-over the ball quickly to attack themselves.

The numbers prove this as midfielder Alexis Mac Allister is averaging 8.4 successful pressures and 0.65 tackles in the attacking third p90, both stats are among the top 2% of midfielders in Europe.

This organised pressure that Brighton put on the opposition has led to them being 7th in the league for goals against from open play, better than West Ham, Arsenal and Manchester United.

It is clear that Brighton’s intention to stop the opposition playing through the thirds is due to the intensity of their full backs in their attacking and midfield thirds.

Marc Cucurella averages 6 successful pressures p90 whilst making 1.07 tackles in the midfield third p90 which is in the top 6% across Europe. Tariq Lamptey also makes 4.1 pressures in the attacking third p90 putting him in the top 3% among full backs. 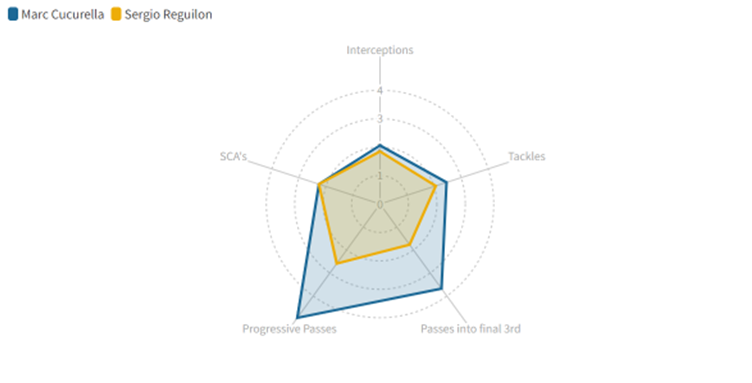 Brighton suffocate teams and force opposition into mistakes by organised pressing sequences as a collective, as they are 5th in the league for Passes per defensive action (PPDA) with 10.5 p90.

This quantifies the intensity of a teams press by demonstrating how many passes the opposition team plays before a team makes a defensive action against them, unsurprisingly Jesse Marsch’s Leeds and Jurgen Klopp’s Liverpool both lead this statistic.

Improving in front of goal

However, despite Brighton proving to be a well-coached, structured and organised, they do have one area of significant weakness which is becoming ruthless in front of goal.

This is summed up by being 12th in the league for xG from open play with 27.7 xG, but they have underperformed in this metric by only scoring 25 goals from open play.

If Brighton are to improve once again next season they will have to find a more reliable source of goals, as Leandro Trossard is their top scorer with only 8 goals.

If you want to find out more about Brighton’s statistics this season compared to the rest head here:2021-2022 Brighton & Hove Albion Stats, Premier League | FBref.com