Seth Burkett was the first Englishman to have played professional football in Brazil. Sports Gazette caught up with him to find out about his incredible story, and what life is like in the land of the Seleção.

Brazil. The spiritual home of football. A nation that has won five World Cups and given us some of the greatest players of all time.

The Brazilian diaspora has, more specifically, blessed the Premier League with numerous talents. Juninho, Robinho and Gilberto Silva, and more recently Philipe Coutinho and Gabriel Jesus have all played their part in reinforcing the glorious mythos that surrounds Brazilian football on these shores.

However, since Charles William Miller helped to found São Paulo Athletic Club – Brazil’s first football team – in 1894, little has been done by Britain in the way of remuneration.

In fact, until recently, only one Englishman had played professional football in Brazil.

Seth Burkett had been released by Peterborough and Northampton Town before joining Lincolnshire semi-professional side Stamford AFC at 17.

“I still really wanted to be a professional because it’s what I had dedicated my whole life to, at that point,” said Burkett.

“I realised that I wasn’t good enough to be a professional footballer for my whole career, but I thought with a lucky break I could just about make League 2, so that was the aim.”

Like so many other aspiring players in the UK, Burkett had sacrificed a lot to get to where he was, but it was the next step in his fledgling career that singled him out as unique.

“We started to have this Brazilian guy come down and watch our games, and there were lots of rumours that he was an Inter Milan scout, he was a really mysterious man.

“He started to get more and more involved in the club, and a few months in he said that he’d got this opportunity to play in a tournament in Brazil, do you guys fancy it?”

Of course they did. Little did the Stamford youngsters know, however, that they would be playing against a Brazil representative side that featured a now familiar name: Philippe Coutinho.

After an 8-0 defeat – a thrashing somehow made respectable by the quality of opposition, Burkett’s luck continued.

He was drafted in to a Vitoria side for a domestic friendly after a left-back was called up to the Brazil under-19s, and impressed scouts at the game sufficiently to be offered a 6-month deal with FC Sorriso in the summer of 2009.

On the decision to accept the contract, Burkett was unequivocal: “I was 18, but I just really wanted to do something different.

“If there was a contract on the table I would’ve gone anywhere, I would’ve gone to China, Qatar, anywhere, [but] Brazil is the beautiful game, it’s really the spiritual home of football, so to be a part of that, you just can’t turn it down.”

And so, as if by magic, Seth Burkett became the first English professional to play in Brazil, just a couple of years after he was released by Peterborough, and a strange footballing love affair began.

Burkett’s arrival was met with a mixture of excitement and intrigue in the city of Sorriso: his teammates reacted with “about 20 minutes of curiosity – they’d never seen someone who’s English,” before he broke the ice with a Portuguese swear-word.

The media was another story, however, and his new club were keen to peddle their prize Englishman at any given opportunity.

“Probably twice a week I was interviewed for TV, radio, whatever.

“The craziest one was in the Copa São Paulo (a pre-season tournament) when we played Palmeiras. It was live on ESPN, there was 15,000 people watching and there was a camera on me the whole game. There were TV panellists talking about me, saying ‘this is Seth Burkett, we can’t wait to see what he’s going to do!’” 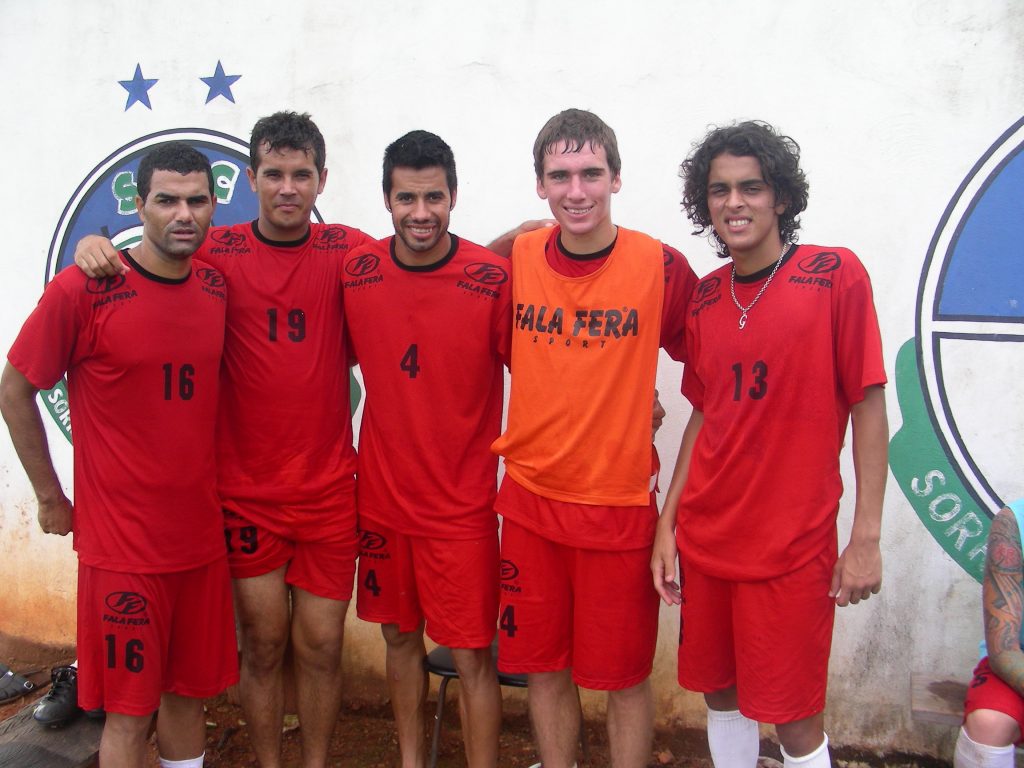 As the club and people of Sorisso quickly embraced their new ‘Inglese,’ he himself could have been forgiven for surrendering himself to the surreality of it all.

Burkett was training five hours a day in sweltering heats, alongside teammates who had plied their trade across the world: club captain Capone Oliveira won the UEFA Super Cup with Galatasaray, a left-back played in the same São Paulo team as Kaka, and another, up until recently, had been at Hamburg.

“[I saw] moments of skill that just weren’t necessary, like our left-back lobbing the ball over someone using his bum, you saw stuff like that and it was incredible.”

One stereotype confirmed, then. And Burkett soon made reference to another.

“We had bars on the windows, three bedrooms between 28 of us, no doors on the toilets, just a concrete block really.”

Yet there was reason to the apparent madness: “They had really bad conditions on purpose. In Brazil a lot of players come from poor backgrounds, and they don’t want them thinking that they’ve made it because they’re playing in the under-18s team.

“So they’re given these horrible conditions to keep that desire in them still to make it as a professional footballer and make it in life.”

And whilst it took some adapting to, it seemed to work.

“It fostered an amazing team spirit, kind of being in it together.

“[We would] come in from a night out at five in the morning and you’d get the ball out and get a game of Donkey going. For me it’s a massive plus now, because having lived in those conditions and knowing that you can survive and enjoy them, it just means you look at life in a different way.”

Despite debunking the issues around infrastructure, Burkett admitted that not all was well during his time in Brazil.

“I didn’t really understand the level of corruption until afterwards when Elias, one of the club directors, was murdered by his boyfriend.

“He was stabbed 15 times and the guy was never caught. There were rumours that it was the chairman or a club official that paid for it.”

And it wasn’t just the corruption that Burkett realised retrospectively. Racism and homophobia was rife, and perhaps not immediately apparent to a “wide-eyed” 18-year-old.

Other issues were similarly made light of: “One time I was a bit scared when there was these three lads on a moped driving towards us and swearing, and they had guns as well. But the lads just swore back at them and it was fine!”

Burkett was truly welcomed into the fold as if one of Sorisso’s own, and has clearly retained an infatuation with the culture.

“Brazilians are just amazing people, they really are. They’re so passionate, friendly and welcoming. You couldn’t possibly have a bad time in Brazil as far as I’m concerned.”

Despite the footballing side of the adventure never truly materialising – his appearances were restricted to a 15-minute cameo in a friendly – his experience transcended the game, and instead became a fascinating tale primarily concerned with human nature.

“Everyone I came across in Brazil was really happy, and you look at them and think if they can be happy, who am I to be sad if I get dropped for a game or something like that.

“So for me it taught me to always look at things in the most positive light, and that everything always happens for the best.”

Although promised a two-year contract, Burkett’s deal mysteriously expired after six months, and he returned to England, briefly playing for Stamford before, aptly, taking up Futsal.

Burkett’s is a tale of what can happen if you say yes to your opportunities. Whilst his career as a professional footballer perhaps didn’t go as planned, the life-lessons learned should prove testament to other English hopefuls that good can come of stints overseas, off the pitch as well as on.

He concluded his story poignantly: “I’d probably sum it up by saying that being in Brazil taught me to enjoy football, and to really enjoy life.”