“You have to be willing to sacrifice who you are right now for who you want to become.”

Alex Gray is an enigma of the National Football League. Coming off his first season with the Atlanta Falcons, he’s taken a phenomenal leap of faith. After a successful eight-year professional rugby career, he left behind everything he knew to pursue a seemingly impossible dream. He’s the first English rugby player ever to play in the NFL.

!!Contract Signed!! Not many will know what it took to get to this point. Thank you to everyone who believed in me from day 1. This is just the start, but I can’t wait to give it everything I’ve got 👊 pic.twitter.com/YW3oLPCWlP

Gray began his pro rugby career at just 17 with (oddly enough) the Newcastle Falcons when he inked a two-year deal with his hometown club. He captained the England Under-16 and Under-18 sides during his spells with Newcastle and the London Irish rugby clubs.

Joining the England Sevens in 2013, he enjoyed a brief yet dominant stint that led to his inclusion in the Great Britain Sevens squad that would compete at the Rio Olympics in 2016. He was named the RPA Sevens Player of the Year in 2015. It’s hard to fathom his seamless transition to a sport he never played before, but witnessing his sheer supremacy and force makes it far easier.

However, everything changed when an injury prevented him from going to Rio with the Sevens side. This led to such an unlikely turn of events, it’s almost impossible to believe.

“It was a crazy chain of events, like the universe had heard me. I was fully focused on England 7’s and the Olympics. After that massive disappointment, I changed teams and went back to (rugby) 15’s. I felt the environment wasn’t challenging enough or getting the best out of me.”

“I got a bit obsessed and started searching peoples NFL Combine scores and watching YouTube videos to see what the physical demands were I needed to actually play this game. I’ve been a casual fan since I was a boy, watching football films and playing the Madden video games. I had a meeting with my agent to discuss what to do the following year for rugby. I said completely jokingly, ‘Let’s try the NFL and make a load of money for us both’. Then literally 10 days later I got a call from him that some NFL scouts had phoned him expressing interest in me.” 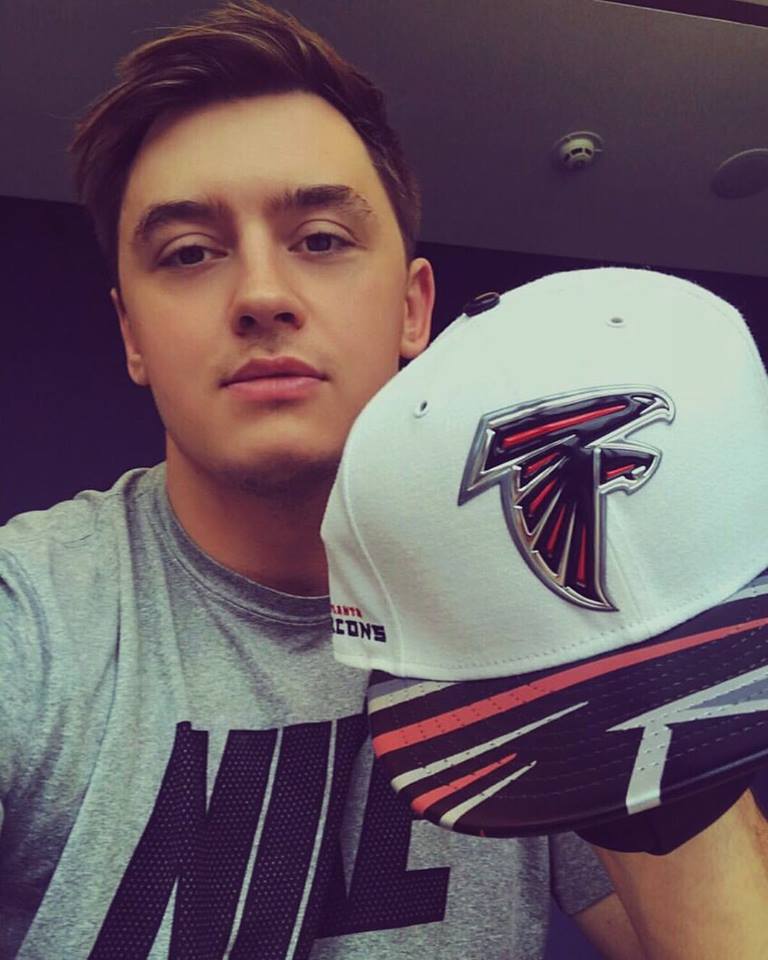 Gray’s incredible path was forged through the NFL’s new International Player Pathway program, in which the eight teams from the NFC South and AFC North divisions are allowed to carry an 11th practice squad player. They’re assured a place with the team so they can develop and hone their skills, but cannot be activated during the season. His arrival and first moments with the Falcons were documented in the NFL’s Undiscovered series last year. (Skip to 13:40 for his segment).

“I can’t describe to people how tough it was coming to a new world where everything is so different. I came to learn a new sport, and not at a low level. You’re coming in to compete with the best guys in the world, and to be thrown into that level of competition was very difficult. But there was a lot I already knew from my time as a pro athlete. Turning up on time, being prepared, wearing the right gear, how to talk to teammates and coaches, how to work hard. I already knew that. So the main challenge was just learning football.”

Regardless of a nearly-insurmountable disadvantage, Falcons head coach Dan Quinn seemed to like what he saw after Gray’s first training camp:

Head coach Dan Quinn has been impressed with the start @AlexShaggyGray has made at @AtlantaFalcons training camp 🇬🇧🏈 pic.twitter.com/QASS4M1uti

Trading rugby in England for football in the United States can be difficult in the locker room and off the field as much as on it. The Englishman is not a typical player or person usually found in an NFL locker room, and the possibility of prejudice is yet another obstacle he’s had to face.

“I’m not sure what it’s like on other teams, but my success in rugby in the past really helped. Players really respect the tough and physical demands required to be a rugby player. I think if I didn’t have that in my pocket people would feel different. They know you’re no joke, and you’re a tough athlete who’s capable of winning. That goes a long way for us foreigners.”

The Atlanta Falcons are one of the few NFL teams with clearly defined team values, and that’s made his fit with the team ideally harmonious.

“I think it helped me fit in here. They looked at my leadership background and thought I’d really add to the ‘Brotherhood’ mantra we have here in Atlanta. We have each other’s backs here and look out for each other. In rugby, you forge a close bond with your teammates, and everyone knows everything about everyone. In the NFL, you see the business side of things much more. You could have a locker next to someone and the next day they’ll be gone, and that’s much different than rugby. But the Falcons are a really supportive group, and that’s been fantastic.” 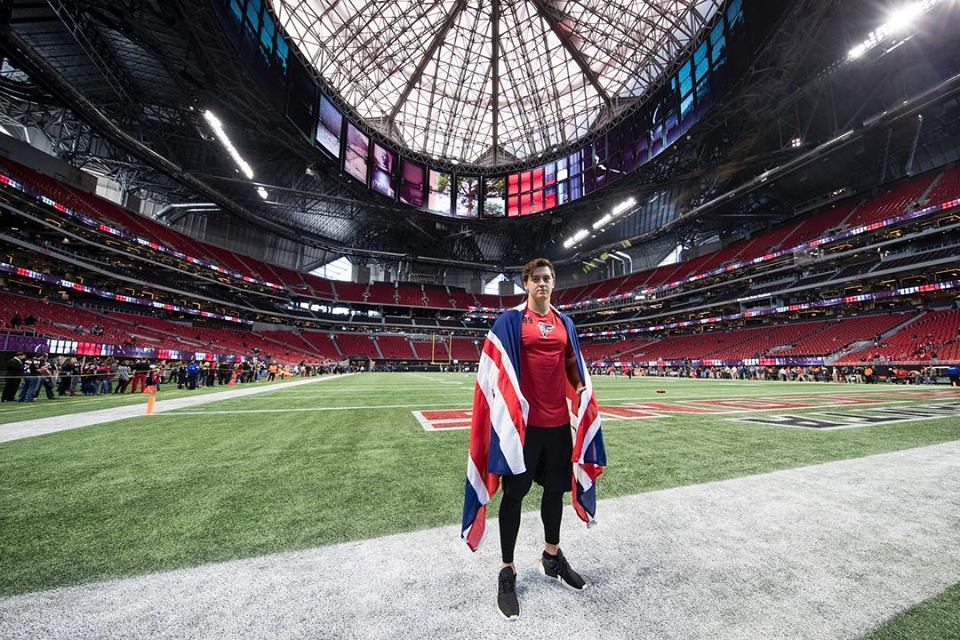 No one in his situation could ever be prepared for making such a monumental pivot in their athletic career. However glamorous NFL life may look from the outside, his is a monotonous and strict one. Fortunately, some aspects of it have been pleasantly surprising.

“The size of the sport has surprised me. Rugby is a big sport but it’s not close to the level of soccer in the UK. I think here, football is on a similar level that soccer is in the UK. The media are all over it. We’re flying around in private jets, we’ve got police escorts everywhere. The life has definitely been a bit different than rugby life. You could just go out with the guys and no one would really know who you were. So yeah, it’s the showbiz part as well, it’s so hyped up in the media. Its really cool to be a part of.”

In the modern NFL, tight ends can’t just specialize in either blocking or the pass game. They must be polished receivers who can line up in the slot, as well as strong blockers who can protect their quarterbacks from the most dangerous edge rushers. Gray is obviously aware of this, and seems to be currently excelling in the pass game.

“The one side of football I have taken to more quickly is the pass game. Running routes, beating a defender one-on-one and catching the ball came kind of naturally anyway. In Sevens rugby, you do lots of one-on-one taking guys on, and running in open space. I’ve always had good hand eye coordination. That’s what I’ve been excelling at.

The TE’s 💪. Amazing being part of this group. Learning so much from them everyday. Great players and even better guys #Brotherhood pic.twitter.com/sWet5idD2h

“But if you want to play for a team like the Falcons, protecting (the NFL’s highest-paid running back) Devonta Freeman, you’re going to have to be able to block for them, so that’s something I’ll be working on. Its tough, because there’s so many rules, and so many intricate pieces you need to know. Who you’re blocking, how you’re blocking them, all of those types of things. The more I get used to that, the better I will be.”

A little over a year ago, Alex Gray would never have guessed he’d be catching passes from the highest-paid NFL player and quarterback of all time. The news broke about Matt Ryan’s record-breaking contract extension just minutes before we spoke.

“I just saw that news literally 10 seconds ago on Twitter. Wow, $30 million a year. Fair play to him. He’s a great guy and a great quarterback, so well done to him. One of the first games last season, he took all us tight ends out to dinner. I’ve been catching some passes from him this season so far as well.” 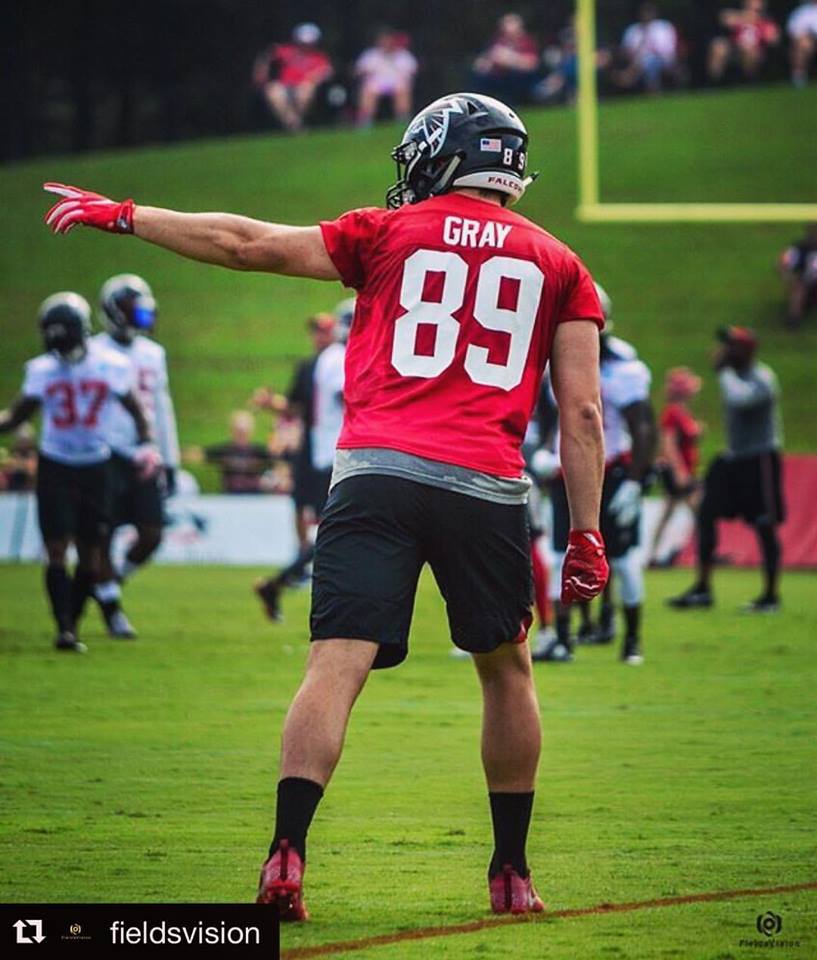 The Falcons recently announced they will carry Gray as their 11th practice squad/international player again for the upcoming season. They recently signed tight end Logan Paulsen, so Gray could have an extra year of experience and development if he doesn’t make the final cut this year. If that’s the case, expect to see him on the final 53-man roster for the 2019 season.

All image credit goes to Alex Gray and the Atlanta Falcons.