The Premier League is often considered to be the most competitive domestic League in the world. However, if we measure competitivity according to the percentage of matches with a three-goal gap and average goal difference that is far from being true. This, according to the most recent study of CIES Football Observatory, which analysed 27 European domestic Leagues, plus Champions League and Europa League, that compare the results from almost all of last season (until April 4, 2017)  with this season (until March 29, 2018).

The results may surprise English football fans, as the Premier League is, in this current season, the second domestic League from all the 27 analysed, with a higher percentage of uneven matches – games with a three-goal gap. With 21.9% of the games (an increase of 4,8% when compared to last season), only the Cypriot first division is worse than England.

When talking about average goal difference things are better, but again Premier League is far from the being the most balanced: England is the 11th league with a highest average goal-difference – 1.44 – the same as last season.

Looking at the top 5 Leagues in Europe – England, France, Spain, Germany and Italy – the Bundesliga is by far the one were the games are, on average, more even and that is getting even more marked. The percentage of games with a three-goal difference decreased 5.6% when compared to last year, happening in just 11.1% of the matches. This means Bundesliga has the second best ranking of all the 27 domestic Leagues, only surpassed by Russian Football Premier League (10,5% of the matches).

The other big 5 are all far from competing with Germany. League 1 (France) with 17.6% of the matches with a three-goal difference, is the 11th worse domestic league in this chapter. La Liga (Spain) with 17.9% – 9th worse – and Serie A (Italy) with 19.8% had a significant increase of 2.5% when compared to last season (6th worse average). England is the worst, with 21.9%, as already mentioned above. 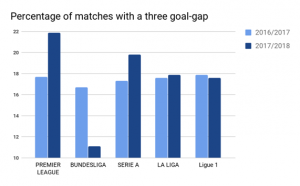 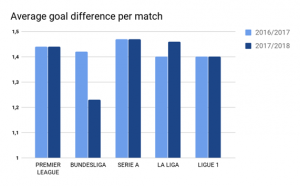 The competition that has more unbalanced matches is not a domestic League, but the Champions League, something that was not the case last season.

With an increase of 8.5% in the number of games with a three-goal difference or higher (the highest from all competitions), in this season almost 30% of the games were unbalanced, surpassing the Cyprus League, which last season was leading in this statistic. Curiously, the Europa League – which is often criticised for not being competitive –  when compared to Champions League, almost half of the matches with a three-goal gap, with 16.1% (being the 13th best competition).

The same it’s right about the average goal difference, where Champions League is also the worst (with 1.87%), with a 0.32% growth when compared to last season, even the highest increase from all competitions. One more time Europe League is in 13th place, with 1.37%.

One of the conclusions this study allows us to make, when we look at the overall results, is that European competitions, from domestic ones to Champions League and Europa League, are getting more unbalanced.

From the 29 competitions, 20 increased the percentage of imbalanced fixtures. Besides that, the average goal gap per match rose from 1.37 to 1.40.