The Commonwealth Games are usually a time for happiness and excitement as it offers an excellent viewing platform for athletes that may not usually get that sort of attention.

But for Natalie Powell, Gold Coast 2018 just won’t have the same attraction to her.

Powell won a gold medal while competing for Team Wales in the women’s 78kg judo event in the Games in Glasgow 2014.

But in the 2018 Commonwealth Games, which is being held on the Gold Coast in Australia, judo has been dropped in favour of the reintroduction of basketball.

And Powell believes that although in the short-term, judoka will be angry, in the long-run, judo will not suffer.

She said: “It’s a real shame for all the home nations that judo is not in this year’s Commonwealth Games.

“I’m really pleased that from 2022, judo will be a core sport at the Commonwealth Games.

“This gives the Welsh athletes something to aim for and increases the profile of the sport in Wales.”

But in the end, Powell believes that judo as a sport is still very popular in the UK and is not under threat of losing its appeal to the public. 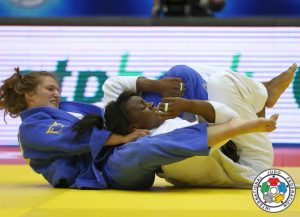 She said: “British judo from a performance point of view is in a really good place.

“The results over the last couple of years are the best GB judo have had in a long time.

“I think there is a lot of potential in the team for Tokyo 2020 and the following games.”

Powell got into judo at a young age, but before specialising in judo, she fell in love with sport in general as a child.

“As a kid I was doing every sport I could – whether that be netball, athletics, football, tennis, judo, gymnastics or badminton.

“I’d be at a different club every night of the week. I was really lucky my parents would take me all over for training, they were the ones that inspired and encouraged me.

“From a role model point of view, I always looked up to Denise Lewis as a kid. I loved how she was so good at everything.”

And Powell believes that juggling her priorities in her life was her biggest hurdle.

She said: “Balancing university and judo was really difficult.

“To put 100% into both was really challenging for me. But I got my degree in the end, I had to lengthen the time it took to complete it from four to six years, but it was definitely worth it.”

And it has clearly all worked out well for Powell in the end.

But Powell’s most recent success is arguably her most impressive.

At the end of October 2017, Powell won -78kg gold for Team GB in the Abu Dhabi Grand Slam which move her up to number one in the world rankings, the first time a British female judoka has been ranked world number one.

And Powell said of her achievement: “To get to number one on the ranking list has been a goal of mine for a number of years, so to get there on the back of winning my first World and Grand Slam medals was extra special.”

But Powell is not resting on her laurels even though she isn’t competing in the upcoming Commonwealth Games.

As part of a group of British judo athletes, she was most recently out in Japan training for the 2018 European Championships which will be held in Tel Aviv on the 26th April to 29th April 2018.

And Powell has set both herself and Team GB some high expectations.

She said: “I’ve placed third at the last two Europeans, so I’d really like to better that this year if I can.

“I think the medal target for the team as a whole is two medals. There’s a strong team that has been selected and if everyone performs to their best there should be lots of medals.”

Despite the omission of judo from this year’s Commonwealth Games, I think it is safe to say that Natalie Powell has got a good year to look forward to.

Wimbledon looks increasingly likely to be the next major sporting event to fall victim to the Coronavirus. Reporters @CallumRSport and @dannyclark96 analyse the potential impact should the Championships be cancelled. #COVID19 #Wimbledon

The #COVID19 pandemic has seen sport across the globe cancelled or postponed.

Our reporter @becksthompson16 shares her personal experience having been scheduled to compete at the world ultimate championships in July.

Our writer @inamyaphi spoke to @Hannover96 striker @Sebastian9Soto about his last two weeks in quarantine the postponed Olympics. Read below ⬇️

Doom and gloom or a sigh of relief? FA's controversial decision to expunge 2019/20 season sends shock waves down the football pyramid.