Posted on 8 July 2021 by Nathan Frazer-Carroll 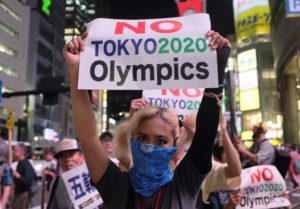 Today Japan declared a COVID-19 state of emergency just two weeks before the 2020 Tokyo Olympic Games is due to begin.

Around 4.48 million tickets for the games have already been sold, along with 970,000 sold for the Paralympic Games.

Seiko Hashimoto, President of the Tokyo Organising Committee announced in June that attendances at Olympic events would be capped at 50% or in other words, a maximum of 10,000 fans at any one time.

With delta variant cases rising in Japan’s capital there is a very real risk that no spectators will be able to attend the Games at all.

Yuriko Koike, Governor of Tokyo said: “If there should be major dramatic change in infections, we may need to revisit this matter amongst ourselves, and we may need to consider the option of having no spectators in the venues.”

It seems clear that Japan’s state of emergency declaration indicates a major dramatic change in infections.

What is not clear is whether organisers are willing to further reduce spectator numbers after IOC President Thomas Bach stated in January that there was no reason whatsoever for the Olympics not to open on July 23rd.

As ever, money is a controlling factor and there is no doubt that IOC and Japanese finances are being weighed up against the possible consequences for public health.

However, public health may come out of that battle the loser. Japan’s social crisis has worsened and it is estimated that over 100,000 people have lost their jobs throughout the pandemic.

The Japanese government will be mindful that significant financial losses may leave the nation in a devastated situation. Unfortunately, preventing spectators from attending the Games could do just that.

A recent study conducted by Katsuhiro Miyamoto, a professor of economics at Kansai University, has found that hosting the Tokyo Olympic Games behind closed doors would result in a ¥2.4 trillion (£16.9 billion) economic loss for Japan.

Miyamoto states that the economic impact of a ‘closed Games’ would result in a huge blow to the tourism industry and reduced opportunities for local business.

Miyamoto also estimates an additional loss of ¥640.08 billion (£4.5 billion) if the games are postponed for a second time.

The study has provided a bleak forecast of what an Olympic Games with no spectators may look like, but many Japanese residents would be pleased to see the event go ahead behind closed doors.

A Change.org petition titled ‘Cancel the Olympic Games to Protect our lives’ has gained almost 450,000 signatures in just two months.

Kenji Utsunomiya, the petition starter said: “If the fundamental principle of the government is to protect the citizens’ lives and well-being, the government must declare the cancellation of the Olympic Games as soon as possible, and instead use the limited resources to protect the struggling lives affected by the pandemic.”

Utsunomiya’s position appears to reflect a large percentage of the population with a recent poll confirming that over 80% of Japanese residents asked were opposed to the Olympics going ahead this summer.

The Asahi Shimbun, responsible for conducting the poll discovered that 40% of participants wanted the Games postponed, and 43% wanted them cancelled altogether.

Protests against the games have also ramped up in recent months as the opening ceremony draws ever closer.

On June 23rd almost 1000 protestors marched on the Tokyo Metropolitan Government Station. Less than a week later nurses and other medical staff protested in Sapporo also demanding the events’ cancelation.

On July 7th a woman was arrested for attempting to extinguish the Olympic torch with a water-pistol whilst shouting “No Olympics” and “Stop the Games.”

These incidents are clearly reflective of country-wide opposition to the Olympics going ahead on July 23rd.

As it stands no further limitations on event capacity have been announced and with the Games beginning so soon, the time to decide may be now or never.