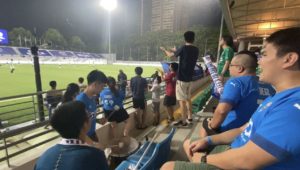 The sudden wailing of the lightning siren brings the chorus of pseudo-English fan chanting to a halt.

I turn to one fan and ask him if this was normal. He replies irritably: ‘Last time it was two hours before the players came back out. There’s not even any lightning’.

He leads me out of the Jalan Besar Stadium, into the sticky monsoon rain, to sample some local street food. I take the spicy crab claws and octopus balls and hurry back to my seat amongst the most partisan supporters of the Lion City Sailors – Singapore’s newest football team. 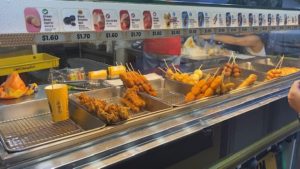 The reality is that in an ultra-modern city state like Singapore, with such strong Western influence and young professional football history, hostility and rivalries between fans inevitably must be somewhat manufactured.

‘The Crew’, as they call themselves, chant a certain song commonly directed between Arsenal and Tottenham supporters. They chant ‘You’re not singing anymore’. They call the referee a… well you know. There is no malice, just a longing for the type of intensity seen in their beloved English Premier League.

What is undoubtedly authentic and genuine is the support for their team. ‘The Crew’ enter every game, after other fans are already seated, by marching in military style, beating drums, and singing their songs. They travel abroad for Asian Champions League matches. They even have a fan reaction channel. 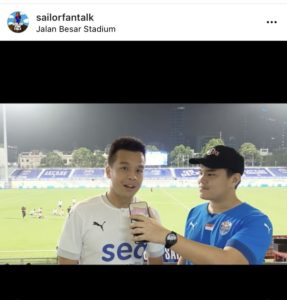 This is impressive dedication seeing as the Lion City Sailors have only existed in their current incarnation for just over two years. Despite being in its embryonic phase, these people really love their club.

The club was originally called the Police Sports Association, organising football teams for the country’s police force.  A year after the Singapore Premier League (SPL) was founded in 1996 it became Home United, representing other state departments as well as the police.

Under this name it became the first club to win the SPL and Singapore Cup double and won the latter trophy a record six times.

In February 2020, the club was bought by Forrest Li, a Singaporean billionaire and founder of internet company Sea. Home United became Lion City Sailors – the first privatised football club in the history of Singaporean football.

Red kits became white and blue, and a new crest was introduced in the form of a ships’ wheel. The new branding, and name Sailors, are an ode to the maritime history of Singapore. 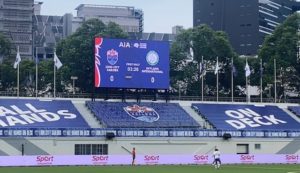 The biggest change, however, was in direction. Li and his team want to boost the standards and professionalism in Singaporean football with the aim of becoming a super club in South- East Asia.

It is a long-term project that has included a new academy, training ground and plans for a verity of new facilities and stadia. They have also signed a partnership with Borussia Dortmund and Feyenoord for the sharing of knowledge aimed at improving coaching standards.

He spoke about his belief in the future of the project: “For me it is the model to follow. Huge investment into the playing roster and into the staff to get quality, high-calibre coaches here. I think it is aiding the player and the development of the club on and off the field.

“I think we have good examples in the region, other clubs who are doing well and have qualified for the next stage of the AFC Champions League as well, so I think for Singapore football the Lion City Sailors are showing the way forward and, in my opinion, in the near future, it is the way to go.”

One of the long-term goals of the Lion City Sailors is to create a product that will get locals invested in their domestic league once again. 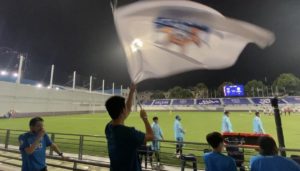 Attendances in the S.League were dwindling before the pandemic, and with Singapore only recently relaxing rules to allow for capacity crowds, the onus is on LCS to create an appealing matchday experience to attract fans.

Signing exciting players does this of course, but so does using the new influx of money to make the Jalan Besar an attractive place to visit. The branding and use of big screens around the stadium looks professional, additionally pre-match and half-time entertainment offers an incentive to visit aside from just watching football.

The club market themselves very well on social media and actively encourages and interacts with supporters, such as those in ‘The Crew’, as they know the value of loyalty from these fans as they try and grow their brand across South-East Asia. This includes coming to greet them after matches and sending out club merchandise. 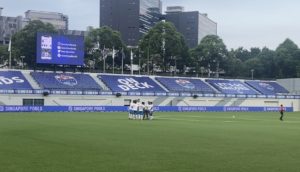 Crew member Joseph told me: “I have been watching the local leagues for many years. The privatisation of this club has raised the game in Singaporean football to another level.

“Hopefully with this new level on investment, the money being pumped in, with our voices and with many other incentives to come and watch the games, the locals here will start to watch and love local football again.

“For us as LCS fans and founders of ‘The Crew’, we hope we can use our club to bring Singaporean football to greater heights.”

There is no escaping the fact that the money currently being invested by LCS is to the short-term detriment of domestic competitiveness.

When midfielder Diego Lopes was signed from Portuguese Primeira Liga side Rio Ave for S$3 million (around £1.77 million) in January 2021, the Brazilian became the most expensive transfer in Singapore football history.

This dwarfed the league’s previous record fee of $50,000 (around £29,500). It was also a signal of intent, bringing in a top player from a top European league in his prime.

They have backed this up this year by adding Champions League experience in the form of Maxime Lestienne, signed from Belgium club Standard Liege. His wages are believed to be the equivalent of well over a million pounds per year.

LCS sit comfortably at the top of the SPL table and, with the level of  investment in the playing squad, it is hard to see that changing until another club can compete with their level of wealth.

Prominent football broadcaster based in Singapore John Dykes believes LCS can offer the blueprint for the future of Singaporean football.

“I’m a big believer in the privatisation model”, he said.

“We still have some interesting hurdles to overcome in that club’s here are still very much dependent on the fact that the facilities they operate in are government owned. 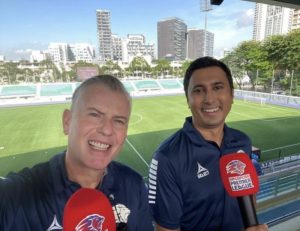 “But, with LCS setting up their training facility, and with the plan now to build more venues, it will allow the privatised clubs, because remember we still only have one at the moment, but you’d like to hope there would be two or three more within the next few years, to be able to commercially exploit the competitions they play in.”

Working on live broadcasts of the SPL, Dykes has seen first hand the success the project has already bought and the impact it can have on other clubs in the country.

“We have already seen the impact of this, not just in the influx of quality players like Lopez or Lestienne, but also because we have seen LCS develop an elite academy which is really sensational, building facilities which, when finished, are just going to drag things up to the next level. 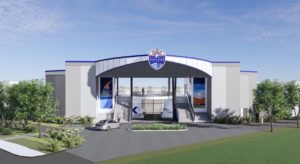 “Also, if you look at the quality of the digital marketing, the social media, the whole wrap-around experience, and professionalism levels they are now developing and attaining will all rub off on the rest of the league which means that Singapore football can be dragged forward.”

Dykes is confident that the impact of the LCS project will be felt even more deeply across the country soon.

“This is a country that went from no Formula 1 to the world’s first ever street circuit night race in about ten months, so this is a can-do country. With this in place I think we are going to see very rapid growth.”