Manchester United may not be the juggernauts they used to be on the pitch, but they can at least boast one triumph this season.

Research shows that they still dominate over all other Premier League teams in one area: social media. 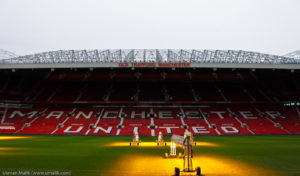 A study examined the verified profiles of each football club in this season’s Premier League and based their results on each club’s combined number of followers across TikTok, Facebook, Instagram and Twitter.

The results revealed that the Red Devils have more than 171 million followers across different platforms. This is a whopping 64 million more than the second most-followed team, Chelsea.

Their Facebook follower count of 76 million is also substantially higher than any club’s following on any social media platform.

“The phrase ‘Manchester United top the table by a distance’ is usually associated with the glory days of Sir Alex Ferguson, but their social media dominance is clear to see.

“Supporters of the club will no doubt hope they can start converting online success into real life trophies.” 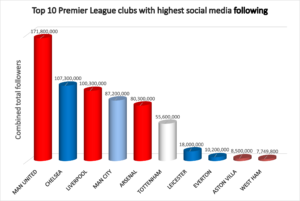 Millennials will remember a time when Arsenal were the only team regularly competing with Manchester United for the top spot, but that contest is non-existent on social media this season.

The Gunners’ combined social media following is less than half of their old rivals’, at just over 80 million. Considering the club’s large worldwide following and the number of fans attracted by the ‘Invincible era’, this disparity is surprising.

Arsenal fans may also be shocked to learn that squad-player Mohamed Elneny is the club’s most followed on Instagram, with 4.4 million followers.

Despite boasting a plethora of superstars and challenging for a consecutive Premier League title this season, Manchester City only rank fourth.

On the other end of the spectrum, Everton secure eighth spot despite nearing the end of the season in a relegation battle. This illustrates the stature of the club and just how devastating their current state is.

An overall view of the results shows the disparity between the so called ‘big six’ teams and the rest of the league. Even the lowest ranked of these, Tottenham Hotspur, have over seven times the number of combined followers of tenth placed West Ham United, who have 7.7 million followers.

This research was conducted by Betpack, which provides in-depth reviews of betting sites and provides comprehensive lists and reviews for users.