Racing has been a male dominated culture with rare exceptions. However, in recent years there has been an ever-increasing female presence both in the paddocks and behind the scenes. The Netflix series ‘Drive to Survive’ introduced us to females within Formula 1 such as Helen Crossley, formally of McLaren. The racing mould is now being shattered by a different team who are setting the standard for women in racing.

Richard Mille has long been a name involved in the racing game. The group has worked with some of the pinnacle names in racing such as Felipe Massa and Fernando Alonso. Now there is a focus into bringing the best female racing talent into their family.

The team has assembled a triple female line up of Tatiana Calderón, Beitske Visser and Sophia Flörsch who make up the Richard Mille Racing Team. In their rookie season as a team, they managed to achieve a top-10 finish at the European Le Mans Series. An impressive achievement for a newly assembled team. Despite only entering their second season together, the team harnesses a serious amount of talent. Second year driver, Sophia Flörsch, believes the experience that the team gained last year will only help them for this season.

“Last year for everyone was a learning year and a learning process. We were all completely new to endurance so not just the team-work but there is so much more that is different compared to single-seaters.”

The first member of the trio is Tatiana Calderón, a 28 year test driver for Alfa Romeo Formula One team. At an early age the Columbian demonstrated her natural racing talent by becoming the first female ever to win national karting championships in both Columbia and the United States. Calderón continued to impress with two podiums in the 2011 Mazda Star Championships at only the age of 17 before going onto finish runner up in the 2015/16 MRF Challenge Formula 2000 Championship.

Although Formula 1 is perceived to be the pinnacle of racing, by achieving a test driver spot on the Alfa Romeo Formula One team it demonstrates that Calderón is one of the gifted drivers on the circuit. A combination of both skill, natural abilities and now years of experience will make her one of the top talents of endurance racing.

Next up is Beitke Visser. The 26 year old demonstrated her abilities back in 2011 at the Supercar Challenge at the Assen Circuit. Despite a 25 second time penalty, the Dutch driver managed to comeback to claim her maiden car racing win on her debut no less. A serious statement of talent and mental fortitude at only the age of 16. Red Bull signed the driver into their famed junior team racing academy in 2013 only to drop her at the end of the season. 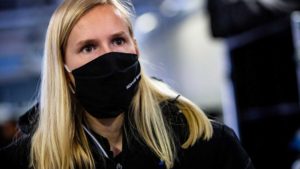 Her mental strength was again going to be tested after a disappointing spell in the Red Bull setup. After stint in the Formula Renault 3.5 series, Visser took a hiatus in 2016 to take part in a development role for a student team from the Eindhoven University of Technology. In June 2017 the team smashed the EV lap record round Zandvoort by 15 seconds.

Life on the endurance racing circuit came midway through 2017 when Visser became part of the BMW Junior Driver programme where she was entered into the 2017 GT4 European Southern Series Cup alongside Dennis Marschall. The pair went onto win the penultimate round in Barcelona before joining Richard Mille racing team in 2020.

German driver Sophia Flörsch makes up the trio as the youngest member being only 20. Flörsch demonstrated her natural abilities behind the wheel at a very early age becoming the youngest driver to win a Ginetta Junior race and further the first rookie to win two races in the same weekend.

Flörsch has made it very clear on social media that her dream is to eventually enter Formula One but her first taste of the big leagues came through Formula 4 in 2016 driving for Motopark. In her first season the German became the first female driver to achieve a points finish in the ADAC Formula 4 race. A podium finish was cruelly taken away from Flörsch after a collision with another car on the closing laps finishing in a very respectable 5th position.

In 2018 Flörsch made the step up top Formula 3 securing only one point that season at the Red bull Ring. A frustrating season took an even worse turn at the Macau Grand Prix after a serious crash with now Formula 1 hot prospect Jehan Daruvala. The crash meant the German had to undergo a 10 hour long procedure for a spinal fracture the following day. Thankfully despite the injury, Flörsch would be able to continue to race.

Life in endurance racing began in 2020 when the young gun signed up with the Richard Mille racing team alongside competing in the FIA Formula 3 Championship. One of the highlights of the season was a 9thplace finish at the 24 hours of Le Mans.

“It made it a lot easier for us, as endurance rookies, during our first season. We all got along really well and enjoyed it a lot, especially at the 24 Hours of Le Mans.”

“We are obviously feeling more confident for this season with the chemistry we have developed together and the experience we have gained as a team.”

Flörsch will continue to race for Richard Mille in 2021 while further competing in the DTM series with ABT Sportsline.

Although for many Formula One is perceived to be the absolute pinnacle of racing, it doesn’t mean these drivers are not immensely talented. Whilst Flörsch arguably has the best chance to break the mould and become only the third female to drive in Formula 1 since the late 70s, failure to do so doesn’t damage her reputation. The all female trio might not break into Formula 1 but they are certainly helping to pave the way for the next era of women drivers.