Posted on 15 October 2018 by Megan Dymmock-Morgan

He’s broken four world records. He’s completed 843 official marathons. He is ‘The Man Inside the Machine,’ according to the title of his recently published autobiography.

Coventry-born Steve Edwards works in the I.T. sector by day, but by night he morphs into ‘The Godfather of Marathon Running,’, and his next mission is to complete 1,000 marathons.

Steve, 55, grew up hating cross-country running, but became inspired to compete over the 26-mile distance after a chance conversation with a friend who was running marathons in aid of Great Ormond Street.

Thirty years on, Steve is now closing in on the barely unthinkable figure of completing 1,000 marathons. What started as running for charity — a similar path to a lot of marathon runners in the UK — Steve has also broken ten world records.

He explained: “What I noticed was I was young, I was only in my twenties or something, and I thought blimey, some of these guys are getting on a bit here. I tested a few things out. There was no record for the youngest person to run 100 marathons so that was my first target.”

Steve worked hard, training intensely, and he was on the right track.

“I achieved that three years later at the age of 28. I ran my hundredth marathon in St Albans in 1990 and that was the first world record. It was amazing. I got the bug, what could I do next?”

Steve’s addiction to marathon running led him to complete another ten world records. He said: “It turned out Richard — the guy I met at one of my races who had introduced me to the ‘100 Marathon Club’ — had just completed 71 marathons in the year. I thought I’m going to go for that record. The whole year I ran 87. I broke his record, but he’s fine about it!

“He says as long as we keep it in this country and don’t let it go to the Americans, but that was my second record and it was during that time that I started thinking further ahead thinking: ‘Where can I take this, what can I go for that’s more longer term?’” 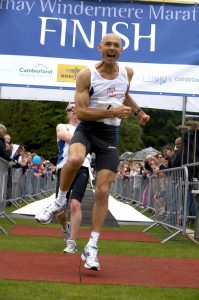 Achieving goals this big doesn’t come easily for Steve and he’s made sacrifices along the way.

“We have a grown-up son and three grandchildren, so just us two at home is great. It’s not like I’m away from my wife. She comes with me to all my races, which is great. She really is very supportive. I always say that without Theresa I probably couldn’t achieve most of what I’ve achieved in my life because if you are in a relationship, then you can’t ignore that relationship. You need that personal side with you to be supportive.”

Some sacrifices are harder than others as training can have a big impact on family time.

“Where the real sacrifices really come from are our wider family. We don’t get to see our parents as much as we’d like to.”

The next step for Steve is to finish the rest of the 159 marathons he has left, aiming to complete them within the next five years. After this, Steve plans to end his career on a high and leave a legacy within the running community and the world. 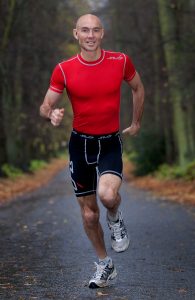 “I look back at that first [marathon] and I think that was an opportunity because it changed my life, basically. It put me on a path which has taken me to places where I’ve visited or where I’ve met people and befriended people.

“It has put me into a world enabling me to get sponsorships and my book. All of these things would have most likely never happened if I hadn’t taken that chance”.

You can donate to Steve’s charity HERE