Skip to content
You are here
Home > Motorsport > Formula One > Hamilton Wins in Singapore as Turn 1 Crash Claims Vettel, Raikkonen and Verstappen 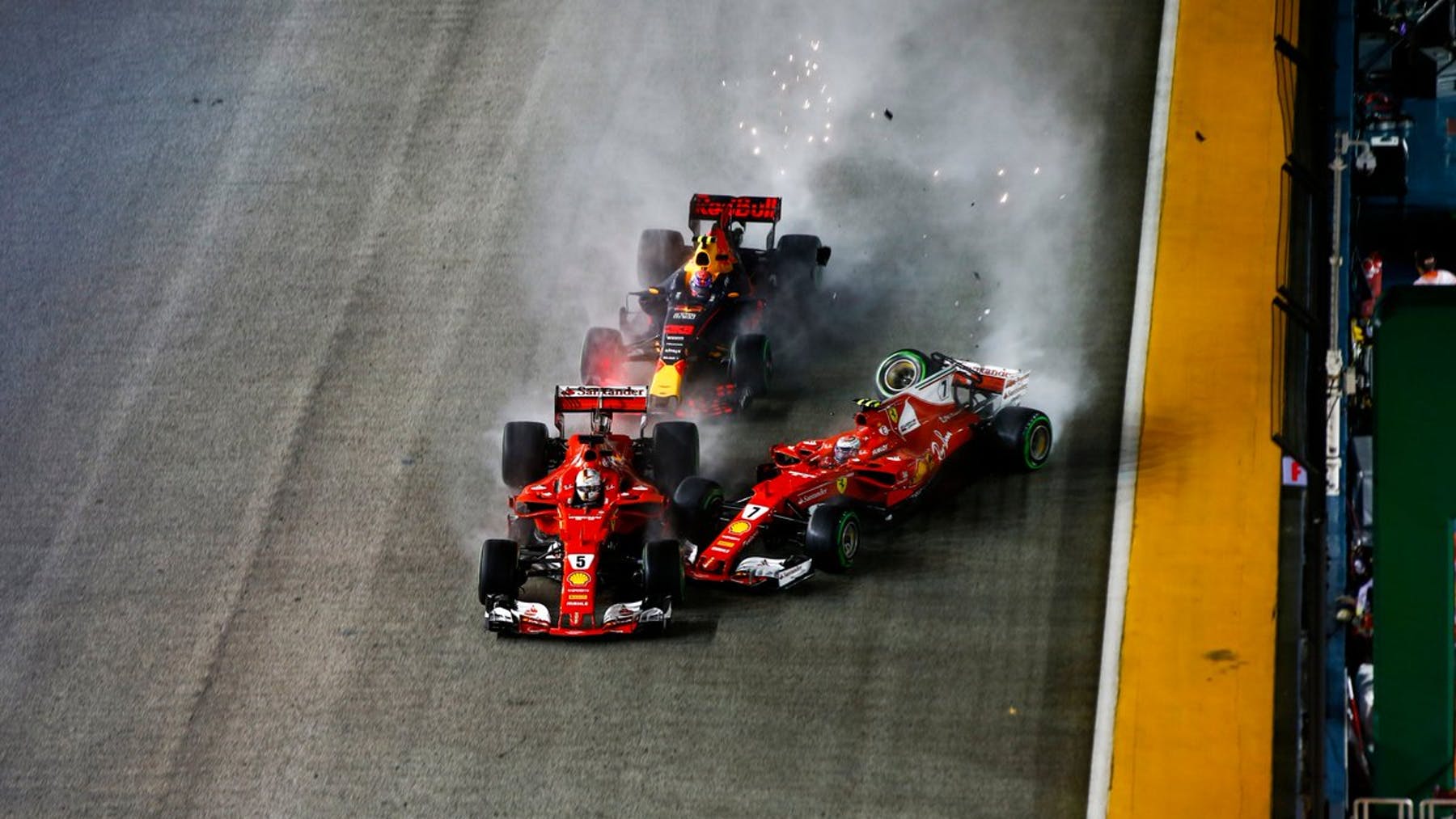 Lewis Hamilton won Sunday’s Singapore Airlines Singapore Grand Prix at the Marina Bay Street Circuit to go 28 points clear at the top of the Formula 1 Drivers Championship after Kimi Raikkonen, Max Verstappen and Sebastian Vettel all crashed out in Turn 1 on the opening lap of the race.

Vettel had qualified on pole and was looking to maintain his perfect record in Singapore when he had started at the front (he had won three times before after qualifying first on the grid). But his chance of a fourth win from pole was dashed almost immediately.

The race began in wet conditions; it had rained most of the day in Singapore and was still raining when the drivers took their formation lap. This forced teams to make a decision between starting on the intermediate or full wet tyres, and the grid was split between the two sets. Regardless of what set drivers were on, it was clear that moisture would be a factor in the opening stages of the event.

Once the lights went out, Kimi Raikkonen got an incredible jump from third off the line. He immediately went to the inside of Max Verstappen to overtake him for second.

While Raikkonen was busy going to Verstappen’s inside, Vettel hadn’t had the best of starts and started pinching Verstappen from the outside to protect his own position. Verstappen then found himself right in the middle of both Ferraris, who were both coming towards him at once. With nowhere to go, Verstappen held his line as best he could, but it was to no avail as Raikkonen drove across Verstappen’s nose.

That sent Raikkonen straight into Vettel, who in turn was hit with massive damage on his left side pod. Vettel drove off with the damage as Raikkonen careened back into the inside retaining wall and then slid into the turn, where he collected Verstappen again — this time for good.

To Verstappen’s outside at that point was McLaren Honda’s Fernando Alonso, who also was clipped and spun out in the melee. Raikkonen and Verstappen immediately retired from the race; Alonso was able to continue.

While all of this was happening, Vettel had driven ahead of the mess and attempted to carry on with his Ferrari, but only made it two turns further before he lost control on his own and spun out between Turn 4 and Turn 5. He lost the whole of his front nose when he collided with the wall, and became the race’s third retirement.

Sadly, Alonso would meet the same fate as the other three drivers eight laps later. The electrical damage he suffered in the original collision cut off the power to his engine and forced him out of the race as well.

Vettel quickly apologized on the radio afterwards for his role in the incident and was later very coy when interviewed, claiming that he saw Verstappen and then Raikkonen hitting him in the side. The Finn, on the other hand, was not concerned with trying to place fault on anyone in the situation.

“I don’t think I really could have done anything different to avoid it”, he said post-race. “But whatever the cause of the accident, it doesn’t change the result any more. Whoever, which way or wherever you look, the results are what they are right now and that doesn’t change.”

Verstappen was quick to criticise Vettel when interviewed about the incident later. “Sebastian started squeezing me and maybe he didn’t see Kimi on the left, but that’s not an excuse”, he said. “If you are fighting for a World Championship, you shouldn’t take those risks and really squeeze someone that much. I tried to back out of it because I could see it coming.”

All of this brought the first safety car of the Grand Prix, which paced the field until the fifth lap. Off the restart, Hamilton jumped out ahead of the field by three seconds within the first lap.

While Hamilton was leading, it was Renault who were making up ground on the full wet tyres. Jolyon Palmer, who only found out earlier this week that he would not be returning to the team for 2018, made a bold move in Turn 1 to get past Valtteri Bottas for fifth. He and teammate Nico Hulkenberg both flew up the field on the full wets while those around them were on the intermediate tyres.

These conditions lasted until lap 11, when Daniil Kvyat locked up his tyres on entry into Turn 7 and stuffed his car right into the tyre barrier to become the fifth retirement of the event.

At this point, nearly everyone came down to the pit lane for fresh tyres. However, the Renaults who had driven up to second and third and felt that the track position on old wet tyres was best, stayed out.

This changed a lap later, with the engineers deciding to bring both Renaults in for fresh intermediates, costing them both track position with the strategic error.

The main beneficiary of all of this was Daniel Ricciardo, who came up to second with fresh intermediate tyres after the cycle of pit stops. Just ahead of him, Hamilton spent most of the safety car on the radio with his engineers at Mercedes, making clear to them his displeasure at not being allowed to pit for fresh tyres himself.

The safety car returned to the pits on lap 15, and even on the older tyres, Hamilton was able to stay ahead of Ricciardo by a second and a half.

Further back in the field, Felipe Massa and Kevin Magnussen managed to touch tyres twice within the span of a single lap, but both drivers amazingly managed to hang on to their cars. They, along with Sebastian Ocon, traded 12th, 13th and 14th three times in almost as many corners, but it was Magnussen who came out ahead of everyone.

Magnussen was also the first to make the jump from intermediates to full dry tyres, pitting on lap 25 to make the change as the track dried out. Felipe Massa would be next two laps later, and that triggered the rest of the field to make their own pit stops. Having pitted earlier, Magnussen jumped teammate Romain Grosjean to go to 10th.

The field stabilised quickly after that cycle of pit stops, and Hamilton and Ricciardo traded fastest laps of the race back and forth over the ensuing handful of laps. More movement came further down the field, where Magnussen’s older tyres began to fall off. He fell back to 12th as Grosjean and Ocon got back around him on the fresher rubber.

Lap 38 saw the third safety car of the evening as Marcus Ericsson lost the rear end of his car as he came out of Turn 12 and hit the wall on the Anderson Bridge. Under this caution period, Massa, Magnussen and Ocon all came to pit again, as did Nico Hulkenberg, who dropped from sixth to 10th after his car had to have its hydraulics fluids refilled.

Magnussen would lose the most once the Safety Car came back in, as a Felipe Massa overtake combined with a lock-up of brakes in Turn 7 sent him to back to 13th.

Back at the front though, Hamilton was back up to a three-second lead within a lap.

Hulkenberg’s hydraulics issues returned at the 11-minute-to-go mark and he was forced to retire. Six minutes later, Magnussen’s MGK unit failed and he met the same fate.

From there, Hamilton cruised to an easy victory while Ricciardo and Bottas completed the podium.

“I needed it to rain, and as soon as it rained, I knew where I was going to finish,” Hamilton said on the podium. I knew we had the pace when it rained but unfortunately, we just didn’t have the car in the dry. The rain, those are my conditions.”

Ricciardo counted himself lucky to not be in the crash at the start. “I can’t win the bloody thing, but I’m trying! I like it around here,” he said. “It was probably a good thing that I got a bad start, otherwise I would have ended up in the chaos. It looked like three were going into one and it just looked like it was too close.”

Bottas also thought he was a bit fortunate, but in a different sense than Ricciardo. “It was very good damage limitation today, we got lucky but the car was working better than I expected today. I struggled in the wet with the pace but in the dry it was good,” he said.

Asked about catching Vettel for second in the Drivers Championship, Bottas’ answer was equally intriguing: “Definitely. There are still plenty of races to come and plenty of opportunities. Sebastian is the next target!”

The 2017 Formula 1 World Championship resumes with the Petronas Maylasia Grand Prix, to be run at the Sepang International Circuit on 1 October.

James Pike
James Pike is a reporter specialising in motor sports. An American hailing from Winston-Salem, North Carolina, Pike grew up near the epicentre of NASCAR, America's most popular form of motor sport. He has spent the last year as a radio analyst on the Performance Motorsports Network and the last three years as a writer for Race Chaser Online. In addition, Pike is a supporter of Tottenham Hotspur, Philadelphia Phillies, and Wake Forest Demon Deacons. He is a graduate of the Motorsports Management program at Belmont Abbey College and currently resides in Twickenham. 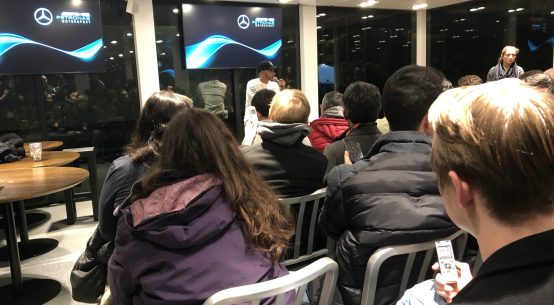 “I always relate it to a house:” Hamilton on the new surface in Barcelona 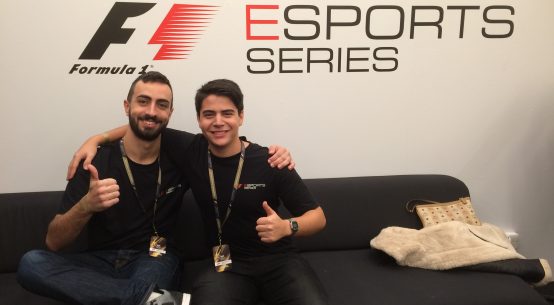