Last month only die-hard tennis fans would have known Lorenzo Musetti’s name, but now the 19-year-old has made headlines after his surprise run at Roland Garros.

This year’s event on the Parisian clay was Musetti’s first ever Grand Slam, after he lost in the opening round of qualifying round at the Australian Open in January. He managed to make it all the way to the fourth round, only losing in five sets to the eventual winner Novak Djokovic.

At the start of this year, Musetti was ranked No. 129 in the ATP Tour Rankings. Now, he has more than halved this to currently hold the 61st spot, which is a career high.

This is heavily in part to his Roland Garros run, where he beat 13th seed David Goffin, followed by Yoshihito Nishioka and 2018 semi-finalist Marco Cecchinato, before finally falling to Djokovic.

The real question, though, is how did the teenager manage to go on such an impressive run and come within one set of beating the twenty-time Grand Slam champion?

The answer, he was consistent and won the points that mattered.

Out of the 128 men’s singles players in this year’s draw, Musetti was ranked 12th on the Roland Garros ‘Infosys Slam Leaderboard’. This effectively means that based on the stats, he was the 12th bestplayer at the tournament.

Despite this, Musetti didn’t score that highly on the ‘flashier’ criteria, being ranked 53rd for aces, 22nd for net points won and 18th for winners hit. However, there were a handful of stats that showed how important his consistency was to his success.

The reliability of his own serve helped put extra pressure on his opponents, while his clinical edge when returning ensured he won key points, which helped him get as far as he did. 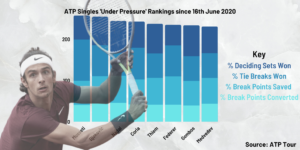 Out of a potential 400 ‘Under Pressure’ points, Musetti scored 257, edging out Djokovic and Rafael Nadal on 254 and 245 respectively. The fact that Musetti’s form puts him top of the ‘Under Pressure’ rankings show he often won the points that matter and this helps explain his remarkable Roland Garros run.

How Novak conquered the new superstar

Although Musetti was playing well coming into his fourth-round tie against Novak Djokovic, he was no match for the number one seed. In every area that Musetti was strong, Djokovic was stronger.

Musetti was ranked tenth in terms of first serves, Djokovic was ranked first. Musetti ranked eighth for break points won, Djokovic was first again. Even on Musetti’s strongest stat (second serves in) where he was third, Djokovic was second! It is therefore unsurprising that these tournament statistics translated into their matchup.

In the match itself, Musetti lost out on many criteria, including first serves in, percentage of points won on first and second serve, net points won, receiving points won, winners and unforced errors. Even in an area where Musetti has previously been strong, the ‘under pressure’ points, he lost out. Djokovic converted all nine of his break points, whereas Musetti only won two out of the four opportunities that he had to break.

Being Musetti’s first ever Grand Slam, the transition from playing best of three sets on the ATP World Tour to best of five at a Grand Slam was obviously a steep one. The average length of a best of three sets match is around 90 minutes, meaning this is the length of time Musetti is used to playing. All of his four matches at Roland Garros exceeded this, with the shortest one being 127 minutes! 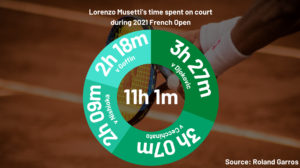 In total, the teenager spent over 11 hours on court across the tournament and against Djokovic, the fatigue truly caught up with him. Musetti won the first two sets via tie-breaks, with the first set taking an hour and 15 minutes, the second an hour and six. However, despite being only a set away from victory, Djokovic came back and won the match in just over an hour, when  Musetti retired at 4-0 down in the fifth. The speed and ease at which Djokovic won the last three sets of their encounter can only really be explained by exhaustion due to the length of time he’d been on court throughout the tournament.

In his post-match press conference, Mussetti even spoke about needing to address his physical problems and how playing five sets that took over three hours in the previous round meant that playing five sets again [against Djokovic], was very tough. He even stated: “If we’d played three sets instead of five, then today would have been different!” This confirmed how difficult the teenager found adjusting to the longer form of the sport.