On the evening when St Mary’s University, Twickenham announced a partnership with the Weir Archer Academy, para athlete Dillon LaBrooy and his father Gavin spoke to Sports Gazette about the youngster’s wheelchair racing beginnings and his Commonwealth Games debut in Australia.

To say that six-time Paralympian champion David Weir CBE has had an influence on the life of LaBrooy would be a massive understatement.

The 39-year-old founded the academy, alongside long-term coach Jenny Archer MBE, where LaBrooy continues to enhance his skills and sets his sights on earning his own success in para athletes in the near future.

Born in Sri Lanka, LaBrooy was paraplegic and brought over to the UK when he was just four years old by his parents Gavin and Dee, who could not have envisaged how things would turn out for their son.

“We were really blessed that my parents lived in Guildford and they’ve been here since 1988,” Gavin said.

“We just came here because we couldn’t get the proper medical facilities in Sri Lanka and we came here to give him a better quality of life, it had nothing to do with sports.” 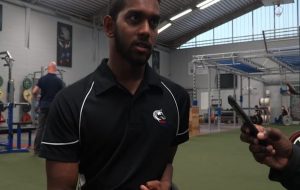 He attended St Thomas of Canterbury Primary School, and it was his P.E. teacher who notified his parents that he should get involved in sports and that’s where the journey began for the youngster.

Gavin said: “Before we know, within six months, they’d got funding from Variety club for a sports chair.”

Gavin also mentioned that his son was determined to succeed in sports after getting the opportunity to meet two-time tennis Paralympic Gold medallist Peter Norfolk, who helped him with the chair.

LaBrooy started out playing tennis before turning his attention to wheelchair basketball where he excelled playing for the Thames Valley Kings and Blackhawks club.

However, after watching Weir take home four golds in front of his home support in 2012, he decided to pursue a new path in his young career.

“I was always fast on the court in basketball so I just wanted to try it out,” LaBrooy said.

“Katie Jones from British Athletics was there and she directed me to Jenny and Dave in Kingston and I just went down one day and tried out wheelchair racing and since then, I’ve gotten more and more into it.”

The 20-year-old has not looked back since after securing gold in the men’s T54 1500m at the 2015 IWAS Games World Junior Games in the Netherlands, and claiming another gold in the England Athletics U15/U17 Championships in the 400m the following year.

Although the inspiration stemmed from Weir, Gavin is desperately keen to acknowledge the impact of coach Archer, who has also played a massive role in his son to where he is today.

“After races, if you go home and she sees that he’s been upset, she’ll call me and ask how was the drive back home, how is he feeling,” he said.

“She’s an amazing character, she’s not just a coach, she’s a mum as well but not just with the athletes but even to us.” 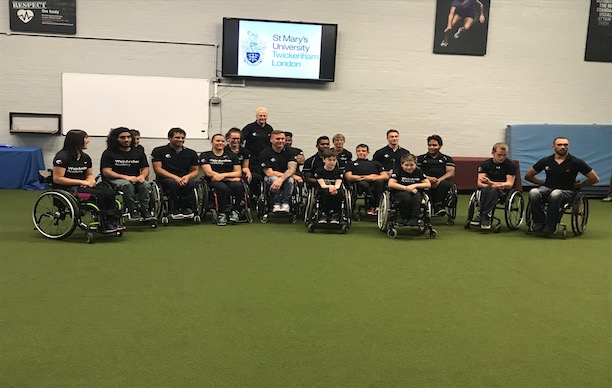 It is clear that LaBrooy has a number of wonderful people surrounding him but he also wanted to highlight the importance of what his parents do for him on a day-to-day basis.

“They are hugely important,” he said.

“They fund me a lot as well. Although I drive, my dad drives me to events and training.

“They’re there after a bad race to help pick me up and if I do well in a race, they’re the first to tell me that I’ve done well. It’s great having them be there for me.”

A solid foundation of family and inspirational figures surely played its part in helping him reach the Commonwealth Games representing Team England for the first time in his career in April.

He finished second in the heats to qualify for the T54 1500m final, where he lined up alongside fellow Team England athletes Nathan Maguire and Richard Chiassaro in the Gold Coast.

Unfortunately for all three, none of them managed to come away with a medal as Canada’s Alexandre Dupont won the race, with Australians Kurt Fearnley and Jake Lappin taking silver and bronze medals respectively.

Gavin revealed that he intended to film the final trackside on his iPad, but he was so nervous that he ended up recording the floor instead as he was too focused on the race itself.

LaBrooy finished fifth, just 0.22 seconds away from clinching the last spot on the podium, but he sees the experience as an opportunity to learn and improve in the future.

“It was one of my goals from last season to qualify for the Commonwealths,” he said.

“I was happy that I managed to achieve that goal. I was pretty proud and it’s good to know that my hard work is paying off.

“It gave me confidence knowing that I wasn’t that far away from a bronze. There’s just a couple of things that I should do differently next time and hopefully get a medal.”

One thing that is extremely endearing about him is his enthusiasm for the sport and his desire to constantly improve at such a young age.

“Watching Dave and some of the other top athletes from Great Britain helps me stay motivated,” he said.

“Seeing what they’ve achieved drives me on and keep going to try and get there. Also, seeing my performances improve at every event motivates me to keep going.

“I set a goal that I have to beat their time by the end of this season and go up the rankings as well.”

Although there have been significant changes in recent years, LaBrooy is convinced that the current media coverage of para sports is not sufficient enough to make a difference in the foreseeable future.

“There’s still no balance between Paralympic and Olympic athletes,” he said.

“Some of the coverage of European World Championships is not on the same level. There needs to be more coverage and try to promote disability sports more to encourage younger athletes to join and help grow the sport.”

When asked whether he could emulate his sporting idol Weir and be influential in helping others kick off their potential sporting careers, he replied: “I want to help inspire the next generation of athletes to come up and do better than I have.

“[I want] to constantly improve the sport because it’s good for the sport when more talented athletes come up and raise the profile of the sport.”

It’s incredible to think that he has to juggle his rising sporting career with a job at the Royal Surrey County Hospital in Guildford working in the HR department.

He disclosed that he only has the weekends to fully take his mind of matters and relax by playing video games and watching movies, with the latest Avengers film being the most recent one which he liked.

LaBrooy could easily be one of the athletes to keep an eye on when the next Paralympics start in Tokyo in two years’ time, where there is every chance that he could receive a hero’s welcome after those games.