Posted on 12 July 2021 by Nathan Frazer-Carroll 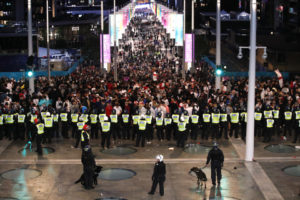 The morning after the night before. Italy have come away the victors of Euro 2020. The nation has swung from elation to dejection but most have arrived at a cathartic realisation: we should be extremely proud of everyone involved in this England set-up. Getting this far was a gift to the nation that we cannot repay. Gareth Southgate and his players have done more on the international stage than any English team for 55 years. They conceded just two goals throughout the tournament and produced some of the best displays of any nation at the Euros.

Despite the innumerable reasons to be proud, there are always people who embarrass themselves and the nation by predictably exhibiting violence and racist behaviour. In years passed we may have referred to ‘a few bad apples’ or ‘individual trouble makers’ but there is no justification for that language here. Evidence points away from lone agitators and towards measurable trends of domestic violence, racism and what seems to be an increasingly low regard for law and order.

Ahead of the final, ticketless ‘fans’ breached Wembley Stadium security and illegally gained entry to the match. The ‘fans’ launched missiles at stewards and police in charge of managing the stadium gates and 49 people were arrested as a result. Occurrences like this have become more of an expectation than anything else. In the aftermath of England’s semi-final against Denmark on 20 arrests were made and the England vs Scotland match saw 30 people arrested in London. 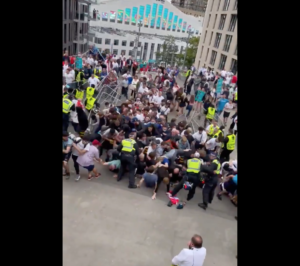 In a post-match press conference Southgate addressed the break in at Wembley Stadium. With very obvious overtones of disappointment, Southgate said: “Everyone has to remember when they support a team that they are also representing England and they should represent what we stand for.”

The Metropolitan Police Federation described the perpetrators as ‘thugs not fans’. The Federation also confirmed that a number of police officers were injured at yesterday’s final.

FA Chief Executive Mark Bullingham apologised to ticket holders whose experience may have been affected and to staff who were tasked with managing the trespassers.

“There were a large number of drunken yobs trying to force their way in, we run a stadium not a fortress” Bullingham said.

As well as the Wembley break in, a vile onslaught of racist messages was strewn across social media platforms such as Twitter and Instagram. The messages came after three black players failed to score in the penalty shootout. Marcus Rashford missed the target whereas Bukayo Saka and Jadon Sancho had theirs saved. Racist slurs, monkey emojis and calls for English players to go-home seemed to punctuate a newsfeed of mostly positive messages backing the team and those brave enough to step up and take a penalty in an international cup final.

The FA released a statement today condemning the racist messages, describing the behaviour as disgusting. 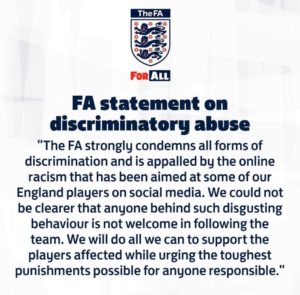 There are no exemptions as a black player for England, this is clear. Marcus Rashford MBE was likely responsible for making sure some of his abusers’ children didn’t go hungry this summer. There were no insults spared for the national talisman and this isn’t a surprise. 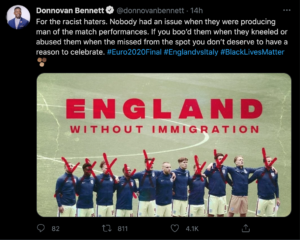 The shocking reality is that every black or mixed-race player in that team is one wrong kick away from receiving racist abuse. The trauma caused when you are the subject of racism is horrible, but to experience it on such a scale, I can only imagine is heart-breaking. What players like the young Bukayo Saka will unfortunately be learning from this experience, is just how fickle England fans are. 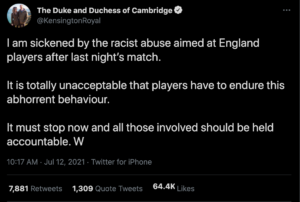 Further to this, there were a number of physical attacks reported seemingly of a racist nature. This serves as another reminder that not only are players one wrong kick away from experiencing overt racism, but all people of colour living in the UK toe this line too. The message is clear. Your existence is only tolerated when you’re bringing something to the table.

Another horrific trend that typically follows an England loss is a surge in domestic violence. Many women praying for an England victory for fear of what their partner may do otherwise. In 2018, domestic violence charity Pathway Project’s slogan “No one wants England to win more than women.” Unfortunately, in too many cases this is true for all the wrong reasons. 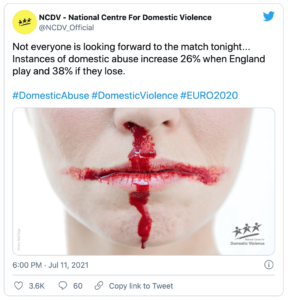 It should not be anyone’s reality that they are most at risk in their own home. Much like the overwhelming number of racist messages, it is societies problem being made worse through football. Efforts to tackle domestic violence need to be stronger, the data has been consistent for too long.

Much could be said about the speed at which The FA and UEFA give issues like this due recognition. Repeatedly these bodies have acted slowly in response to societal issues that intersect with sport such as gambling addiction, racism and LGBTQ+ equality. Many of these subjects are slowly beginning to be taken more seriously but there is a long way to go, and more causes that deserve publicity. Tackling domestic abuse should be much more of a priority in society and in the sporting world.

What we can learn from all this is that it feels brilliant to be united and working towards a common goal, but much of that feeling was closure to illusion than reality. More importantly, this tournament has painted a glaring picture of England divided. Cracks that were not so evident during ‘It’s Coming Home’-mania are as clear as day now. Unfortunately, we have come to accept that there are those among us who will behave with a complete lack of respect and dignity given the wrong set of circumstances. This is not, and should not be normal.

I will say it loud and clear. Those who engage in racism, violence or any behaviour dangerous to the physical or mental wellbeing of another human should seek professional help. It is an illness to be treated yet it has been enabled through the vehicle of football. It’s a problem that will not improve if we simply continue to let it occur. Sport is a reflection of society and these events have put those devoid of a moral compass in full focus.

But how can we improve the situation when it’s so far reaching and so disgustingly blatant? The answer is not easy. A duty certainly lies with our government, social media companies, The FA and UEFA as they hold powers of law making and set an example for the nation to follow. However, this should not overshadow that a huge responsibility lies with us. We as a society hold enormous powers of influence and are often better situated to call out these incidents where they occur. Supporting those affected and displaying allyship can go a long way, but before things improve we must all admit – England has a problem.