As a gymnast myself, I remember looking round the gym and being fixated on this particular gymnast.  Being shouted at to focus because it was my turn to go. She would do the highest flips and the fastest twists, all with the biggest smile on her face.

The 24-year-old completed her gymnastics career at The Academy of Gymnastics in Portishead and was training for up to 32 hours, six days a week.

“The best thing about the Olympics was honestly just being there. It was just such a surreal experience, especially when you remember seeing it on the TV when you’re little.  It was hard to take in because the whole thing just goes too fast and you forget to appreciate where you are,” said Harrold.

The lead up to the Olympics can be more of a strain on athletes than the Olympics itself. When the gymnasts have endless competitions and trials to enter and they are training at their highest peak. It essentially becomes a full-time job and is very demanding both mentally and physically.

The packed training regime can result in injuries, which requires time off that they cannot afford. When a gymnast is given time to rest, they tend to find themselves catching up on lost time within their social life and their education.

“One of the biggest challenges before the Olympics was not getting injured because there’s so much pressure on each trial as it comes. It was also difficult finding the distance away from the gym, because gymnastics becomes your life. At the time I wasn’t in school anymore, so it was hard to separate gymnastics and my social life, I don’t really know if I did a good job of it or not,” she said.

Many athletes have been left devasted with the recent postponement of the 2020 Olympics. Training regimes have had to be rewritten and the mental preparation for the athletes has been put on standby. Athletes will be working overtime after lockdown to regain their peak fitness and skills before the games next summer.

As a two-time Olympian, Harrold sheds light on the situation:

“I think it’s going to be difficult. Even more so for girls’ who may have decided to retire after the games.  They will have been thinking ‘ok we’ve got four months left, three, two’.  So, I think it’s going to be really hard to cope with mentally, plus not being in the gym for 2/3 months. But at the same time what is another year, in the grand scheme of things, when you’ve been doing it for 20.”

It seems there is a clear contrast between elite and college gymnastics with differences in coaching, training, competitions and even new gymnastics rules. Training 18-hours a week with an additional five hours of conditioning, Louisiana State University still prioritises student’s education and supports the athletes with their academic studies. This is very different to how Harrold had lived before, as with elite gymnastics, studies often take the back seat.

“The biggest difference between elite and college gymnastics for me was the level of enjoyment because essentially, we are women trying to do a child’s sport. You are treated with a lot more respect, with the way you negotiate programmes and assignments and you’re listened to when your body hurts.  You’re treated like an athlete and not just an object, like not just a piece to the puzzle,” says Harrold. 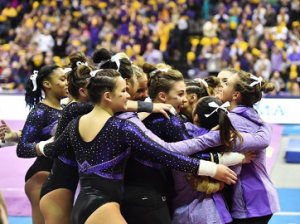 “At college, you invest in each other, and to go through the achievements and the highs and lows of the sport as a team, it makes it more worthwhile,” she added.

In her three years at LSU Harrold felt that college gymnastics had helped her grow as a person, but also benefitted her gymnastics career. As you grow, it’s natural to focus on different things and certain pressures can cause athletes to lose the enjoyment of their sport.

“College gymnastics definitely helped me learn to be strong-willed and be more accepting of others but also to be able to stand up for what I value. I would definitely tell younger gymnasts to consider [college gymnastics], it’s an amazing experience, and a great way to finish out your career,” said Harrold.

“It’s so fun. The people that come to watch you are genuine fans, it’s cool to see the impact you have on them, the competitions get packed out like football games, compare that to worlds in 2013. The crowd was empty.

“It’s also a great way to find love for the sport again, because that’s what happened to me and happens to a lot of elite girls,” she added.

The USA Gymnastics scandal is a devastating, but vital topic to cover. The organisation has been involved in a series of scandals spread over two decades starting in the late 1990’s. It relates to a number of female athletes being abused, many of whom were minors at the time.

Last week a documentary was aired on Netflix called ‘Athlete A’, which didn’t just cover the abuse inflicted by national team doctor Larry Nasser, but also the large cover ups of information, which allowed the appalling lies and actions of USA Gymnastics to transpire.

“It’s heart-breaking that as a young gymnast the lines are blurred between what’s right and wrong. You’re constantly told ‘you’re not hurt, your foots not hurting, you’re not in pain’, and when you’re told this amazing doctor is here to help you, you let it happen because you’re in so much pain,” said Harrold.

Dr Larry Nasser engaged in abuse over a 14-year stretch, under the pretence of providing medical treatment to more than 265 women, making it one of the largest sexual abuse scandals in sporting history. He is now serving a 60-year prison sentence.

“We are now seeing people standing up for change and people speaking out about their opinions. That makes me proud to be a part of a community who have been able to speak their voice and speak their truths. I hope stories are told to make this sport a better environment for the next generation,” Harrold explained.

“It’s not right, but things are changing, and they need to.”