The St. Mary’s Scorpions were crowned National University Champions after their impressive performance in last year’s ICC [International Cheer Coalition] competition. Sports Gazette joined the cheerleaders ahead of next month’s Nationals to discuss stereotypes, routines and plans to retain the title.

Pom-poms, tiny outfits and catchy chants – the stereotypes about cheerleading are plenty, largely thanks to the Bring It On film franchise and American football. But what used to belong exclusively to the U.S. has slowly but surely made its way to the UK.

The unconventional sport can now be found at varsity level in most universities across the country. St Mary’s University in Twickenham is the home of the St. Mary’s Scorpions, a group of 30 students who regularly compete as part of their extracurricular activities.

When team captain Hannah Parker first joined the squad, she quickly realised she had to prove her own stereotypes wrong.

“Initially, I just liked the idea of a pretty kit and bows. I probably didn’t see it as a sport when I first started, but now after doing it, it shows how hard it actually is,” she admitted. 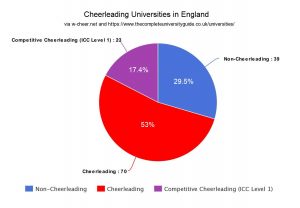 The chart shows the rising popularity of cheerleading as an extracurricular activity at universities in England (2018).

Cheerleading is often seen as a sideline routine at another sport to motivate the players and create a fun atmosphere for fans. But Hannah explained that the ‘real deal’ was far from it.

She said: “There’s two types of cheerleading: one is just dancing and pompoms, and then you got proper cheerleading which is for yourself and not cheering for other people.”

When asked how she planned to retain the ICC title, the team captain was determined to follow in the footsteps of previous successful presidents.

“I’m the president this year, and my aim with it is to make sure we go to Nationals each year by recruiting more people, getting people to learn new skills and place well,” she said.

The age-old debate “is cheerleading a sport?” is a question the Scorpions and many other cheerleaders have had to face countless of times. However, this is not the only stigma the male cheerleaders face, given the feminine nature of the sport.

Murdo Searle is one of the Scorpions’ few male cheerleaders yet he does not necessarily feel like it makes him stand out in this squad.

“To have a guy on the team, it is weird and it is so rare, but they [the girls] have just been so warm towards me that it just doesn’t bother me,” he said.

Our reporter Iman Alaouie spent an afternoon with the St. Mary’s Scorpions to find out exactly how cheerleading is a high-performance sport.

Like many, @HenryFieldman was disappointed when he knew he wouldn't compete at #Tokyo2020 this summer.

But the Team GB cox is now focusing on the year ahead and the new opportunities it presents. @emily_salley shares his positive outlook on the situation.
https://sportsgazette.co.uk/no-olympic-team-ever-really-anything-like-gb-cox-henry-fieldman-tokyo-2020-postponement/

Covid-19 has had an unprecedented impact upon elite level sport, but little has been reported on the lower levels of sport in the UK, @_thomasjclark spoke to the manager, captain and vice-captain of @HRBFC about how they and the club are getting on.