Posted on 4 November 2018 by Emilia Ottela

The founder and director of the Sports Journalism programme at St Mary’s University in London, Dr Daragh Minogue, has been shortlisted for a prestigious new National Council for the Training of Journalists (NCTJ) award.

The industry training award “recognises the outstanding work of individuals, educators and employers who promote equality, diversity and inclusion in the media and training sector.”

Up against Daragh at the award ceremony on November 29th are two other shortlisted candidates, Abbie Scott, Deputy Editor at the Financial Times and the Press Association Training.

“It is unusual for me to be nominated for an award. This normally happens to my students and graduates, but of course I am pleased to be recognised for the work we do on equality and diversity in sports journalism,” he said.

The new award category, according to Daragh, suggests that the industry is finally taking the lack of equality and diversity seriously.

Really chuffed to be shortlisted for this new award for championing equality, diversity and inclusion in journalism. https://t.co/y3JktFQU1C

In 2010, the MA sports journalism programme started as a collaborative project with News Associates.

Daragh says “the programme was conceived around a series of key questions, like what is wrong with sports journalism?”

Sexism and a lack of diversity were among the issues they knew this programme had to address.

Daragh says, eight years on, “tackling these issues continues to be a priority” as the course continues to help students — both men and women — with a variety of backgrounds get jobs in the industry. 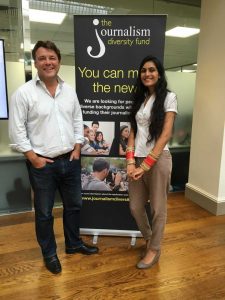 Daragh is proud that the MA Sports Journalism course at St. Mary’s is well-known for its higher than average female participation.

Daragh adds that they have always had women teaching on the course too, which, he says, remains unusual for sports journalism courses in the UK.

“This course started with ten students in 2010, four of whom in that first year were women”. Now, the course has grown to include an international sports journalism programme “that this year has enrolled students from Japan, India, Angola, Brazil, France, the USA and Finland.”

The programme also enables the students to challenge stereotypes in the sports media.

“One of the things we have always done from day one is to give women’s sport the respect and recognition it deserves,” Daragh added.

Students do this through their journalism, he says, but they also examine the industry from critical perspectives, in a module that focuses on journalism ethics.

“That module, specifically, I would say is central to opening our eyes to wider challenges facing the industry,” said Daragh’s former student Nick Friend, who is shortlisted for the NCTJ Student of the Year award.

“I think it has become very easy nowadays to talk about diversity without necessarily acting and truly understanding what it means.

“Daragh is different in that regard; the focus on debating ethical issues through its own module on the course is unparalleled and lends itself to genuine discussion and awareness of equality and diversity matters,” Nick explained.

According to Daragh, its important for universities to get involved in the fight for female equality in journalism. “We can’t always point the finger at the sports media, universities and courses like ours have to play their part too”.

Former female graduates continue to come back to St. Mary’s as guest speakers and mentors. “It really encourages the students when they see our graduates thriving in the industry, but they are also not shy to talk about problems. The conversations are frank and enlightening.”

Daragh is hopeful that one day one of his former female graduates will join the course in a teaching capacity too.

Daragh’s attitude towards equal rights started way before 2010. As a son to a single Irish mother, growing up in Scotland and England in the 1970s, Daragh remembers what life was like for his mother back then.

“In those days, there was a lot of anti-Irish racism and prejudice towards single mums. My mother’s experience has had an impact on my attitude towards equality.”

“And I’m still learning  … from my wife, my two daughters and my students”.

LAFC’s Carlos Vela @11carlosV took home the golden boot last year with a record breaking 34 goals. But who will come out on top this season?

The @MLS’s season kicks off this weekend, and we will get a first look at the new expansion sides - @InterMiamiCF and @NashvilleSC.

With the launch of @SportsMediaLGBT's 'Rainbow Ready' guide for the media, @jonboy79 spoke to our reporter
@muireann_duffy about challenging the representation of LGBT+ community in the media. #RainbowReady #RainbowLaces https://sportsgazette.co.uk/sports-media-lgbt-challenging-perceptions-within-sports-journalism/