Michael Gunning, an Olympic swimmer, was used to training up to six hours a day. However, his world was turned upside down when he was told he could only leave the house once a day for a maximum of an hour for exercise.

Covid-19 has caused extreme disruption to athletes’ daily training routine, alongside the uncertainty of not knowing when they can return to full-time training and competitions. Gunning, like many athletes, had been training towards the 2020 Olympic Games in Tokyo for a number of years. However, he will now have to wait one more year to achieve his Olympic dreams of swimming for Jamaica.

The 25-year-old was born in Jamaica and moved to the UK when he was five years old.  Gunning holds the Jamaican records in butterfly and freestyle strokes and has met the Olympic Selection Time (OST). He was waiting for clearance from the Jamaican Olympic Association to make the team without the Olympic Qualification Time (OQT). 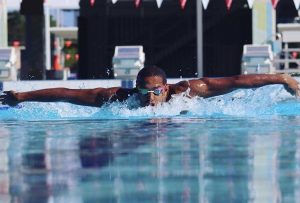 Gunning found out that Tokyo 2020 had been postponed while he was at a training camp in South Africa. He immediately flew home to Manchester UK, on the day the UK went into lockdown.

“Deep down we really hoped it [the Olympic Games] wasn’t canceled but maybe delayed,” Gunning said.

“I’ve trained the last 4-5 years with Toyko in mind. So, to nearly have that taken away was difficult and really hard mentally. But I don’t think we knew how serious it was [the pandemic] when we were in South Africa. It wasn’t until we got back to the UK that we realised, wow this is really dangerous.

Whilst being in lockdown Gunning has kept himself busy with fitness and posting workout videos on YouTube for his viewers to join. He has used the time off to have fun with his house-mates and take time to think, reflect and enjoy the things he never got to do during his busy swimming schedule.

“The biggest strength I’ve taken is that everyone in the world is in the same boat. It’s not any different from any country. None of us can train, or have access to our normal training regime. I think that’s what is getting me through,” he said.

Gunning was incredibly successful competing at the last two World Aquatics Championships. He currently holds the Jamaican records for 200m in butterfly stroke and both 200m and 400m in freestyle stroke.

Gunning has broken down the stereotype that black people cannot swim, and with pride month in a couple of weeks time, I talked to him about becoming the first BAME Jamaican athlete to come out as a member of the LGBT community on TV in 2018.

“I represented Great Britain in the past and had a great junior career with them, but when I was going into my senior career, there really wasn’t many black athletes. When Jamaica asked me to represent them I knew that whether I represented Jamaica or GB, I could still meet my goal of trying to inspire as many people as I can. That was always my mission,” said Gunning.

Sadly, Jamaica still does not openly accept the LGBT community and was called the “most homophobic place on Earth” by Times Magazine. Gunning hasn’t returned to his country since coming out, so, along with his swimming dreams, his main goal is to be someone that people could look up to.

“It feels amazing that people can look up to me. I have also had lots of people reaching out to me on social media saying that they felt the same and they can’t come out because they’re living in Jamaica. People in the UK have also found my story inspiring,” he said.

His work both inside and outside the swimming pool has not gone unnoticed as he was given various different awards such as the Attitude Pride Award, Stone Wall Sports Champion Award and was nominated for the LGBT Sports Personality of the Year. 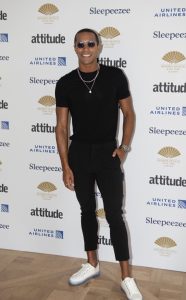 Talking to Gunning first hand highlighted his incredibly positive outlook on life, coupled with his kind and genuine personality. This is also reflected in his social media platform where he connects with many people from all over the world.

“I love to be authentic, and 100% myself on my social media. I’m not trying to be someone else,” said Gunning.

“I like to reach out to as many people as I can and I reply to most of the messages. People know that they can be open up to me or ask any questions.

“I feel very honored to be able to inspire on an international level. And to be the first BAME Jamaican swimmer is amazing,” he added.