Many people do not consider golf a sport. One round is usually a four to five hour long leisurely six-mile walk with, on average, slightly less than 100 golf swings. The game — at least the way the most people know it — is good exercise, but not an extreme sport or one demanding a high level of fitness.

If you’re one of the people that’s thinking this category applies to you, then you definitely haven’t heard of speedgolf.

If you are wondering what speedgolf is, the clue is very much in the name — the game involves running and playing golf at the same time.

Played for the first time in 1979, with the oldest known tournament hosted in 1998, the goal is to score as well as you can, as fast as you can.

The International Speedgolf Alliance (ISGA) define the sport as a “fast and affordable alternative to traditional golf.” Consider this; best speedgolfers whittle a four-to-five hour round down to just 60 minutes, in which approximately 72-75 shots are played.

Their vision is to “develop the sport of speedgolf for Olympic consideration within the next 20 years.” An ambitious aim certainly, considering traditional golf only recently made its way back to the Olympics as of Rio 2016, after a 100-year hiatus.

The sport is definitely making progress in this regard and the world’s best speedgolfers gathered at the Turning Stone Resort, New York, for the sixth annual Speedgolf World Championships this week. 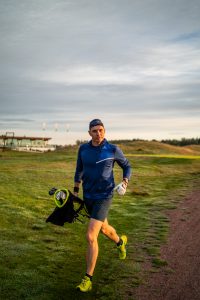 In just his second appearance at the world championships, Finnish speedgolfer Mikko Rantanen captured the gold — his first time on the podium — with a score of 126:28, 71 golf shots in 55 minutes 28 seconds. He ran 5.3 miles.

“It was my first competitive speedgolf round that I have played under par. And to do that in world championships is just amazing,” Rantanen told the Sports Gazette.

With that round, Rantanen also made history, becoming the first ever player to play under par in the world championships.

He continued: “It has been my dream to win a world championship in something and for a some time I have been thinking that speedgolf could be my way to achieve that.”

A speedgolfer usually carries only four to six clubs per round — the limit is seven — contrasted to 14 per round in regular golf, though this can vary per course. On shorter courses, for example, they may only elect to play with one club. Rantanen chose to take six clubs with him for the world championships — driver, three-wood, six and nine-irons, sand wedge and putter — as the course at the Turning Stone Resort is longer than an average speedgolf course.

Aside from the differences in approach in terms of equipment, the rules are largely the same. The main difference, perhaps, is that the flagstick can be left in the hole while putting to help make the speed of play much faster.

Playing one round of golf in less than an hour pertains to the idea of playing several rounds per day. Rantanen took this one step further, however.

Last summer, the Finn decided to run a marathon while playing. Equipped with just his trusted six-iron — considered the most average club in a normal bag — Rantanen completed five rounds of golf in four hours and 43 minutes. To simply run a marathon in that time is impressive, let alone play golf simultaneously. 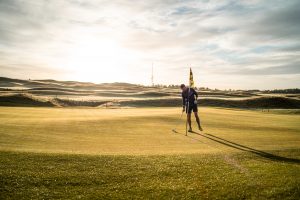 The buck doesn’t stop there. First it was the marathon, then came the triathlon. Nine holes of golf on a mountain-biking, then a short swim, rounded off with nine holes of speedgolf.

“This must be the first time in history when golf has been played in the format of a triathlon,” he said of his achievement.

“I want to make a one-hole Guinness World Record, which means to play a 500-yard hole in under one minute and 38 seconds. I also want to play nine holes in under 15 minutes and obviously I want to win the speedgolf World Championships again.”

Given Rantanen’s speed on the course, this could become a reality a lot quicker than he may think.