The first Olympic Games in 1896 was an all-male competition, with no women allowed. The ensuing 124 years have seen women go from not participating, to competing in every sport at the Games. But how much has really changed?

Over the years, female participation has been steadily rising at the Olympics. However, it took until the 1976 Games in Montreal before women’s participation rose above 20%, and even just 36 years ago 77% of competitors at the 1984 Games in Los Angeles were male.

It wasn’t until 2012 that there was at least one woman in every delegation, for the first time ever.

The postponed Olympic Games in Tokyo, that will now take place in 2021, are set to become the most gender equal Games in history, where 48.8% of competitors will be women.

The International Olympic Committee (IOC) has said it is fully committed to reaching full gender equality by the 2024 Olympic Games in Paris.

“It has been more of a marathon than a sprint, but female Olympians are at last catching their male counterparts in the numbers game,” the IOC said in a statement.

But look beyond the playing field and we see a deeper issue.

At the 2012 and 2016 Olympic Games in Rio de Janeiro and London respectively, just 11% of accredited coaches were female, showing that women continue to be underrepresented across the board. 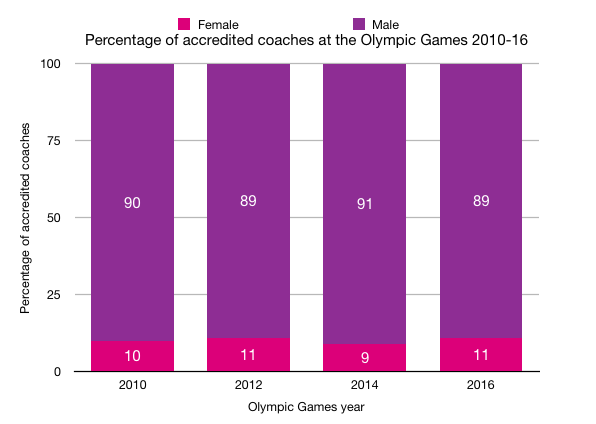 The IOC itself is taking steps to ensure that full gender representation is achieved. All new sports that are added to the Olympic Games must contain women’s events and for the first time in Olympic history, one of the legacy goals for the 2016 Rio Games focused on gender equality – encouraging women’s participation in sport. In March 2017  the IOC announced a gender equality review, with the promise of a “tangible outcome” in 2020.

In 2020 it announced that for the first time ever there must be at least one female and one male in every one of the 206 teams competing, as well as changing the rules to mean nations can nominate both a male and a female to carry the flag during the Opening Ceremony.

“With these two initiatives, the IOC is sending another extremely strong message to the world that gender balance is a reality at the Olympic Games,” IOC president Thomas Bach announced.

One thing is clear – we’ve come so far, but we still have a way to go.