Posted on 22 November 2018 by Darren Barnard

Siblings. They drive you to succeed and tease you when you fail. They can encourage you to try new things that you probably wouldn’t think of doing without their intuition.

England’s new wicketkeeper Ben Foakes was one of many to follow their sibling’s footsteps. A six-year old Ben made the short trip to Frinton-on-Sea Cricket Club with his older brother Matthew and began a cricketing journey that would take him to the highest level of the game.

The club wouldn’t usually let children under the age of seven sign-up, however the Colts coach Antony Stubbs decided to make an exception as he was good enough and had an older brother to support him. How could he have known that 19 years later Ben would become only the second English wicketkeeper to score a Test century on his debut?

When asked about the influence that Mathew had on little brother Ben, Stubbs or — as he’s known to everyone in Frinton — ‘Stubbsy’, said: “He was a major influence and another influence was his father Peter, who spent a lot of time with the two of them just throwing balls at them in the nets and encouraging them in that respect.” 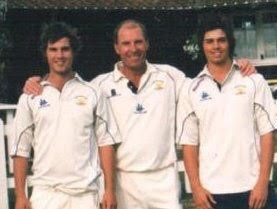 Peter was a former Premier League referee and encouraged Matt and Ben to begin playing cricket. After retiring from refereeing, Peter taught at a school just a few miles away from where his sons developed as cricketers and spent most of their time growing up. His dad sadly passed away suddenly while Ben was still a teenager, although the affection people had for the Foakes family in the local community was everlasting.

Stubbs explained: “I walk down the street and people stop me to say; ‘oh I taught with Peter,’ ‘I know Fiona.’ They’re all so happy for them. It’s lovely for the area as we feel a bit isolated out here as a lot of cricket in Essex evolves around Chelmsford and just south of there.”

Ben quickly stood out amongst a talented group of young cricketers and Stubbs was aware that Ben had to be pushed in order to continue his development. He quickly decided to never play him in his own age-group in order to provide a challenge and prevent him from boredom. Often, this could hinder a youngster’s development or even push them backwards, however Ben was rarely overawed or fazed by anything. 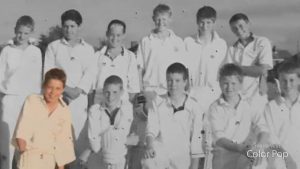 Stubbs said: “They would talk about the same game they were involved with and firing each other to be better than the other brother.” Emphasising that Ben relished playing with his brother in an older age bracket.

Stubbs nominated a few individuals towards North Essex District trials every season and it was obvious Ben was too good, so he got in touch with Barry Hyam — who was coaching Essex under 12s at the time — and Ben was accepted immediately. In a matter of time, Ben started winning end of season awards for his age group and a pathway to professional cricket was quickly evolving.

His mother drove endlessly back and forth along the A12 to take Ben training in Chelmsford, which reduced his availability for Frinton. Nonetheless, he became Frinton’s first team wicketkeeper at the age of 15.

Stubbs said: “He would complain that umpires were missing stumpings because his glove-work was so quick, even at that age.”

The countless hours spent working on his wicketkeeping as light began to fade during those summer days in Frinton benefited him enormously. It took him 1,013 balls before he conceded his first bye in Test cricket against Sri Lanka.

2011 was a year of achievements. In January, Ben was selected for his first England under 19s tour in the same country that he later made his full England debut. He was the first choice wicketkeeper and batting at number three for his country at youth level.

That same year, he was selected for the Essex first team and made his first-class debut against Sri Lanka once more in a tour match at the County Ground, while he went on to sign his first professional contract with his home county.

He was unable to hold onto the gloves permanently, though, with former England wicketkeeper James Foster and Adam Wheater both seeing more of the action. In 2014 — when it became clear that Essex weren’t going to renew his contract — Surrey immediately offered Ben an opportunity to join the South London-based county.

Stubbs said: “It was the best thing that could have happened. It was unfortunate for Ben as we’ve had chats before when he was coming through. He was adamant that he wanted to play for Essex.”

There was no guarantee that Ben would be the first choice wicketkeeper, and he had to impress to overtake Steven Davies and Gary Wilson, who both had more first-class experience. Director of Cricket at Surrey, Alec Stewart was clearly passionate about Ben’s ability and declared him the best wicketkeeper in the world long before he broke into the England test side.

But would that title ever become a burden? “Having never played for England it was a bold move and it put a lot of attention onto Ben, but I think he took that in his stride and coped with it very well,” Stubbs said. “He’s always just got on with things, he’s very unflappable.”

His performances for Surrey were noted, and at the end of 2017 he was selected for the Ashes squad to go to Australia. Despite everyone’s best efforts to forget that series, England were comprehensively beaten 4-0.

Ben, though, was ultimately the water-carrier for the entirety of the series, as well as the following one in New Zealand, which ended in 1-0 defeat from the two Test matches. England have previously been criticised for taking players on long tours without sufficient game time to justify it, as was the case with Sam Billings.

Stubbs said: “They got absolutely humiliated there and he still never got an opportunity. I thought you’re being hammered and you still can’t give this young lad a chance. That’s when I began to worry, then they recalled Buttler.”

The current ethos of providing youngsters an opportunity to flourish under Joe Root’s captaincy has given England the freshness they needed to win their first series away from home in two years. Ben’s teammates — Sam Curran, Rory Burns and Ollie Pope — have all recently been selected for their country.

Stubbs said: “They’ve got to stick with that youth and be prepared to lose a few games if they have to. But stick with it because it will pay dividends. We could be hitting a real golden era for England in that next ten years.”

Ben will be determined to solidify his spot in England’s Test side with an Ashes series to look forward to next summer.

Unable to put on Frinton whites as regularly as before, his last game for them was in 2014 against Ramsey in Cambridge, a playoff to get into the East Anglian Premier League, wherein Ben and Barbados cricketer Justin Greaves helped secure promotion. The photo of that winning side still proudly hangs in the clubhouse today.