Anorexia is often endured in silence. Yet it has swiftly grown into a common and debilitating illness for men and women in the modern world.

The illness is a relatively modern phenomenon and is, as such, yet to be fully understood by the wider public as is the case with many mental illnesses. Families and friends of those suffering from anorexia can struggle to relate to the illness while the NHS are often unable to provide adequate assistance as their resources are so overstretched. As a result, those affected by anorexia can feel isolated, misunderstood and alone in their plight and attempts to recover.

However, sport and exercise can serve as a saving grace for those suffering from anorexia as it has for Coralie Frost, who became an anorexic at the age of 13. Only three years ago she decided to take up long distance running which has led to three marathons, an iron man and the growth of a blog detailing her recovery through running.

She is surprisingly honest when talking about an illness that is defined by furtiveness.

“My personality meant I was always vulnerable to anorexia,” says Coralie. “My personality was always that of a perfectionist who liked having control of things. I got a 1st Degree and a good job. It’s funny because people ask me what I could have achieved had I not had anorexia. I actually think anorexia gave me a certain kind of discipline which meant I could achieve that.”

“People would always praise me and tell me how disciplined I was and how great my will power must be to avoid food. But I was constantly missing out on meals, parties and festivals, things I wish I could go back and do. So even though people praised me I wasn’t really living I was simply existing.”

Coralie’s efforts to recover were not particularly successful before she began running. “A lot of people like me are told that they are not sick enough when they try to go through medical channels. My boyfriend had bulimia and was also helped greatly by long distance running. He was on an NHS waiting list for over three years. Resources are just so overstretched.”

When she began running it was not in an attempt to recover yet it was more than another manifestation of anorexia.

“People often ask me if running was and still is just another obsession or way of reinforcing my need to be skinny. That may have been the case at the start but I honestly don’t think that’s the case. I think the most crucial thing is finding something that was bigger than my anorexia and finally I found it.”

She was actually discouraged from running by her medical advisor when she first started. Resting and eating was the main requirements for a body that had been so depleted for so long. “This classic plan of recovery is correct of course”, she says. “But simply eating more and resting brings and incredible amount of anxiety. It runs completely counter to the way an anorexic lives which is to avoid food or to manically burn it off through exercise. In most cases someone with anorexia just won’t be able to stick to that recovery because it’s just too hard to do mentally and you revert back to old habits which make you feel that you are in control.” 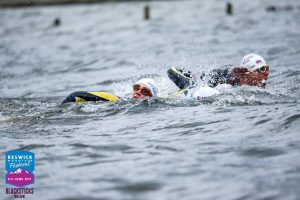 Despite going against medical advice, Coralie began to run and increase her distances but she was still depriving herself of food. “The turning point came when I finished a run and my stomach was in so much pain that I just collapsed on the floor because I was literally running on empty. At that point I realised the only way out was to eat more if I wanted to be able to continue doing the thing I had developed a love for. Sure enough the more I ate the further and faster I could run.”

“Knowing and reinforcing to myself that I had to eat to be able to continue doing something I enjoyed helped me keep in control of my anxiety about food and gaining weight. Running was bigger than my anorexia now I don’t know what else it could have been.”

As Coralie finally found a way of eating somewhat appropriate amounts of food for her health without reverting back to deprivation, that brought a new challenge. “Because I became anorexic so young I never had any idea how to feed myself. I had no idea about normal amounts of food, healthy choices and so forth so that took a while to manage.”

Though she says she will never feel fully recovered from her experience of anorexia, Coralie has shown what is possible with this more unorthodox approach. She now hopes to reach as many people as possible whose efforts at recovery through conventional means have not succeeded.

“The amount of people that have resonated with my blog has been staggering. People with depression call it the black dog that is always present in the background no matter how hard you try. It is similar with anorexia, there are always doubts and fears even now but through my own way I now have far more control than I ever thought I would have. Seeing both men and women recovered and happy on the other side of it is all I want to do now.”