There are many hard hitting poignant moments in ITV’s one off documentary, Robbie Lyle: Football Fans Under Their Skin. Lyle, the Arsenal Fan TV You Tube sensation presents an initial jovial nature as fans stop him at every turn ahead of a home game at the Emirates. AFTV has over one million You Tube subscribers with 800 million content views worldwide.

Fans of his channel and the Gunners from across the globe ask Lyle for selfies, a result prediction, or a chat. Lyle is in his element. “ I love football! It’s given me some of my best moments of my life. I adore it! It’s my job, it’s my passion.”

The sight of this jovial, amiable cuddly bear of a character soon switches however when he is asked, “ What’s it like being a black football fan?”

Lyle offers nothing but a sad sombre look into the distance. The pain very much etched on his face needs no words. Any fan, and especially any black or Asian fan knows exactly what he means.

Lyle recalls the time when racist abuse was rife in football and while black players suffered horrific racist abuse on the terraces, they made their way out of the stadium on the team bus. Black fans, contends Lyle were faced with trying to remain safe in getting home in an often hostile environment.

“ When professional footballers get racist abuse, they can leave the pitch and get home on the team bus whilst the black fan is left in the stands to fend for themselves. When you went to football back in the day as a black fan it was dangerous.

“It was tough. It was hard, sometimes you were frightened. You stood out like a sore thumb and there were people who wanted to knock your head off only because you were black. It was bleak. I don’t want to see those days return for my children. But sadly I now believe that racism is creeping back into the game.”

Sterling has been a recent and unfortunate target of racist abuse

Following high profile racist incidents involving the abuse of Raheem Sterling, Mohamed Salah, and thirty years after Liverpool’s John Barnes kicked a banana hurled in his direction, we saw a banana skin thrown at Arsenal captain Pierre-Emerick Aubameyang in last December’s north London derby against Tottenham. Lyle is right. Racism is creeping back into the game.

Disturbing car video footage of a child being taught vile and racist chants by his Millwall fan elders, and the 2015 footage of Paris commuter Souleymane Sylla being prevented from boarding the metro as he tried to make his way home from work by Chelsea fans at Richelieu-Drouot station ahead of a Champions League game against Paris St. Germain and singing, “We’re racist and that’s the way we like it,” amplify Lyle’s assertion. “ This has got to stop, I’ve got to take a stand.”

For him it goes deeper.

Lyle reveals that he never went to a game with his dad because of the atmosphere around football when he was growing up. “ Racism has definitely stolen the opportunity of me and my dad going to football,” and Lyle laments that he will never get to experience something which is a rite of passage for many football fans  with his dad, Aston, now 93.

One of the most moving scenes of the programme comes when we see Lyle in a pub with Cass Pennant, Troy Townsend, Rene Carayol, Ron Bell and Alvin in conversation about how racism has returned to football. The viewer is left close to tears as Carayol recalls the excitement of going to see Chelsea with his dad for the first time and how events took an unexpected but sinister turn.

“ I was too young to realise what my dad was going through, which was abject full on frontal racism,” says Carayol as he very painfully recollects the racist abuse, the spitting on his dad’s coat, with the side of his head covered. He just wiped it away with a handkerchief. “ He never said a word. We left at half time and never set foot inside a ground again.”

We see footage of Lyle being racially abused and jostled outside White Hart Lane, as a police presence tries to steer him to safety, with what appears to be at least one Spurs fan trying to defuse a highly charged situation.

As the programme seems to be lurching into a racist driven abyss, some light is shone for football fan integration from the Midlands.

It is a diversion one wouldn’t normally expect to see in this kind of programming, but the presence of Asian football fans with similar experiences warranted its’ inclusion and for which ITV and Lyle should take credit for steering into this narrative.

Firstly a Leicester City fan for over forty years Dipak Gohil tells Lyle of how as a 9 year old, he was racially abused at Filbert Street from an older but fellow Leicester City fan, until the unexpected intervention of a Newcastle United fan in the home end. “You should be ashamed of yourself picking on a young bern,” said the Geordie, and the matter was diffused. Gohil now also looks for Newcastle results in tribute to that encounter. 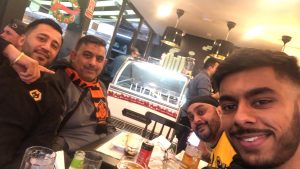 The Punjabi Wolves have been a vibrant presence at Molyneux(@PunjabiWolvesSG)

Across in the West Midlands, Lyle sees signs of hope and encouragement for fan racial diversity inclusion and tolerance, leading him to remark, “They’re leading the way. This is the future.”

That future is to the beat of bhangra as the dhol drum rocks. This is the home of the Punjabi Wolves, where fans from across the racial divide are seen relaxing over a few drinks in a safe environment. Wolverhampton Wanderers’ fan Pete Bassi explains how his cousin Sukhdev started the Punjabi Wolves to connect with the club. “We’re all Wolves fans at the end of the day.”

As the Punjabi Wolves make their way to their game against Liverpool, they file by Lyle, shaking his hand and wishing him all the best. “ Maybe this is the way we breakdown some of the racism in football.”

Maybe more programming highlighting this issue, and one which football cannot continue to avoid would also help.

As #PrideMonth comes to an end, our reporter
@becksthompson16 argues that there should be fewer barriers for transgender athletes at grassroots level sport.

Before joing our #MASportsJournalism @YourStMarys next term, Maria is raising money for the Royal Marsden hospital. Please RT and donate if you can. https://twitter.com/Maria_Valletta/status/1271772110197788678

The power of Twitter please help me!! My dad was diagnosed with a rare cancer back in Sept last year! He was treated @royalmarsdenNHS who saved his life! In Sept I will be climbing Mount Snowdon to raise money! All donation appreciated! x
https://www.gofundme.com/f/maria-amp-olivia-climbing-mount-snowdon?sharetype=teams&member=3646370&utm_medium=social&utm_source=twitter&utm_campaign=p_na+share-sheet&rcid=e818b754428a41baa9d21e6f95e794b2 @GoFundMeUK