Shanice Davidson is one of our most successful GB tumblers.  At the age of 19, she has already made history as she jumps, twists and flips through the air.

Davidson made her name known on the international stage when she had her major breakthrough in 2011. At 11, she was selected for her first World Age Group Championships where she was placed fourth, just 0.01 points off third position. Since then she has become World Age Group silver medalist, Junior and Senior European Team Champion, and two-time Great British Champion.

Davidson was brought up by her grandparents, who took her to Durham Gymnastics Centre when she was six. However, it wasn’t until she was eight years old that she started tumbling.

Tumbling isn’t in the Olympics, so the world championships are the biggest competition she can enter. Davidson was top ranked in qualifying and she scored a whopping 69.6 for her two passes, which left her just .300 off the top spot.

“I was very happy with my performance at the world championships, it’s the first time I have competed with that much pressure,” she told the Sports Gazette.

In gymnastics, split-second changes are all part of the game.  If something doesn’t feel right, the gymnast may not have time to discuss it with their coach. One has to decide oneself whether to go on with a move or not.  And that’s exactly what happened when Davidson stood there, ready to go for her world class tumble.

“My aims going into the world championships was to show more difficulty but to try and keep a high execution. I had planned to do ‘back in’ on my first run and trained to do flick transition to flick back in. But when it didn’t feel right on my first run I went for my back up, just a double pike,” she said.

“After that I knew if I wanted to push for the top I needed to go for the back in off the whip transition. Although it wasn’t the prettiest of landings, I was still happy to have upped my difficulty and land on my feet,” she added. 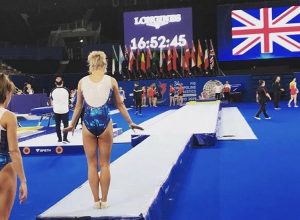 However, competing at the highest level and representing her country at such a young age is not easy. Davidson said it was important to deal with the pressure to perform at her best.

“I like to put my earphones in and listen to music to take my mind off the competition. I do a lot of mental preparation.  I will watch a few videos from training and visualise my tumbles before I go to bed on the evening of the competition. This usually helps a lot with dealing with the adrenaline and the butterflies,” she said.

“Then before I tumble I usually visualise what I plan on doing down the track. It helps me to understand skills and deal with nerves.”

The relationship between the gymnast and the coach is a unique one. They push you and cry with you (both happy and sad times). They pick you up when you fall down and wake you up before those early morning training sessions.  More dangerously, you put your life in their hands. On top of that, gymnasts and coaches spend more time together than with their own family. Davidson’s coaches, Dan Lannigan and Glen Wharton train with her 5 days a week for 3 hours a session, so there is an incredibly close and supportive bond.

The coaches also help a gymnast rise to the perfect level right before a tumble. Davidson’s run is completed in under 10 seconds and the coaches are the last ones to speak to her before she flies down the tumble track.

“I will ask my coach for positive talk when I start to feel nervous, but I think what helps me the most is having consistency within my tumbles as it boosts my confidence a lot and makes me feel ready” she added.

Looking forward to 2020, Davidson has more time to train as there are no World Championships next year.

“I think what I am looking forward to the most next year is having some time to play with new skills and working on more upgrades,” she said.

My aims for 2020 is to make the European team to go to Sweden and then to hopefully up my personal best and have more difficulty”.

Below is a reflection of Shanice’s incredibly successful 2019, take a look!